WASHINGTON, Nov. 1, 2017 – As improbable as it may sound, South Koreans are eating less rice these days. And even more unlikely sounding, the U.S. is exporting more than it ever has to the Asian nation that doesn’t allow private companies to import the grain directly.

The primary reason for the U.S. success, USA Rice officials say, is a strong outreach program to South Korean buyers that is essential now that the country isn’t required under World Trade Organization rules to buy U.S. rice.

Up until January of 2015, South Korea was required to buy at least 50,076 tons of U.S. rice because of the deal the country made when it joined the WTO. That was just part of the overall 408,700-ton quota for total imports. In 2015 the U.S. lost that assured market. The overall quota remained, but countries like the U.S., China, Taiwan and Vietnam had to begin fighting to get a portion of it.

It can be extremely difficult to outbid exporters in those countries that subsidize rice production, and the South Korean government is making it even harder by pushing down domestic prices.

South Korean farmers had a bumper crop last year, producing about 4.2 million tons of rice, according to USA Rice data. In order to support domestic producers, the government is planning on buying 720,000 tons and placing it in storage, contributing to the country’s 2-million-ton surplus.

USA Rice began intense conversations with buyers, promoting the quality of the medium grain rice that’s mostly grown in California. But it wasn’t that simple. About three years ago the group recognized a growing shift in demographics and a sea change in the way that South Koreans ate at home.

“Rice is still a basic commodity that everyone in Korea eats,” said Jim Guinn, director of international promotion programs for USA Rice. “They’re just eating less of it as table rice and we’re seeing a trend of ready-to-eat foods being the preferred source by this new demographic.”

That new demographic shift, he said, is an increasing number of one- and two-member households that have less time to cook. 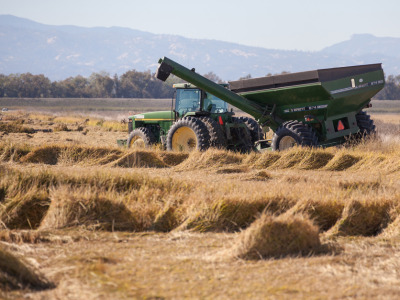 Rice theft threatens Haitian market for US exporters
US exporters on the offensive to maintain, build market share

Steve Vargas, senior vice president for global rice trade at the California-based Sun Valley Rice, attributed much of the U.S. success to funds from the Market Access Program (MAP) and Foreign Market Development program (FMD) that are run by the USDA to promote and help sell U.S. farm commodities around the world.

It’s the South Korean government that imports the rice, so U.S. exporters have to have faith that their work with private buyers will spur them to demand U.S. product.

And that’s exactly what has been happening, said Vargas, who stressed that the popularity of California’s Calrose rice, together with the extensive promotion efforts, are paying off.

"This is a direct benefit of MAP and FMD,” he said. “It’s government funds well-spent.”

The result of all of that work is completely new “home meal replacement” dishes that are made with U.S. rice and are already popular with shoppers in South Korean grocery stores, said Guinn.

Just this year, a large South Korean manufacturer began selling a new line of the “convenience” foods that include rice cake soup and stir-fried rice dinners that only contain U.S. rice. Another major manufacturer is now gearing up to produce and sell an array of meals that are based on Southern U.S. style cooking and Latin American dishes. Those are scheduled to hit retailers next spring.

“I think this validates our strategy in promoting U.S. rice to food manufacturers (and) processors,” Vargas said in a report generated by USA Rice. “We began this strategy three years ago when our contractor first recognized the demographic trends that have led to this surge in demand for ready-to-eat products. We expect to build on this trend in future years.”