A newly released USDA audit of Brazil’s ability to produce safe beef calls into question the country’s “equivalency” status that allows it access to the U.S. market, according to government, industry and food safety advocates. At a minimum, the audit shows that Brazil still has some serious regulatory hurdles to clear before it can resume shipping its grass-fed beef cuts to the U.S.

“We have serious concerns and that’s why Brazil is not shipping (beef to the U.S.)," said a U.S. government official, who asked not to be identified because the investigation into the safety of Brazilian beef is not complete. "We continue to have conversations with Brazil,” the official said.

USDA’s Food Safety and Inspection Service (FSIS) took the rare step of shutting Brazil’s beef exports down in June after inspectors at U.S. ports found “repeated import violations such as abscesses, ingesta and unidentified foreign material (in) raw intact beef product” from eight Brazilian packing houses. Between March 1 and June 22, FSIS blocked 11 percent of all Brazilian beef shipments – about 2 million pounds – before the decision was made to stop all imports.

The ban was put in place before the audit report was produced by FSIS officials who traveled throughout Brazil between May 15 and June 2, visiting production facilities and poring over government protocols.

The completed report and analysis showed serious systemic problems. The individual plant inspections of eight Brazilian facilities turned up some violations, but a much larger concern were the failures in the way the Brazilian government is supposed to assure the safety of the beef it ships to the U.S.

Any country that wants to export meat to the U.S. must prove that its safety regulations are roughly equivalent to those in the U.S. Brazil was pronounced equivalent last year, but the May-June audit showed failures in six key components of that equivalency, including government oversight and sanitation protocols.

Those failures, such as the finding that Brazilian government inspections of cattle carcasses are “inadequate to ensure that only wholesome carcasses, free of contamination and defects receive the mark of inspection,” may not stop Brazil from regaining access to the U.S. market, but the country has a lot to do before that can happen.

“Any time a regulator is auditing another country and they find these kinds of things … that’s significant because that’s what equivalency is based on,” an industry source told Agri-Pulse. “But most of those issues – if they aren’t already resolved, they’re working toward getting a resolution.”

Both industry and government officials do not expect a resolution to come soon, though, and another FSIS audit of Brazil will likely be needed before the country can resume exporting to the U.S.

Right now, FSIS officials are reviewing Brazil's responses to questions and criticisms that were raised in the audit, and that is likely to be a lengthy process, the U.S. official said.

It’s unclear how adequate the Brazilian responses have been, but the few examples that were included with the release of the audit report were sometimes curt.

For example, when presented with this FSIS statement: “Inspection personnel do not adequately enforce sanitation regulatory requirements to prevent the creation of insanitary conditions and direct product contamination,” Brazil simply responded that the “finding's conclusion is not grounded.”

Brazil has maintained for months that U.S. complaints were overblown.

In July, when Brazilian Agriculture Minister Blairo Maggi visited USDA headquarters, he said he was optimistic the U.S. would soon lift its ban on the country’s beef, then a month old. Maggi, who met with Agriculture Secretary Sonny Perdue, later met with reporters, downplaying the severity of Brazil's beef problems. 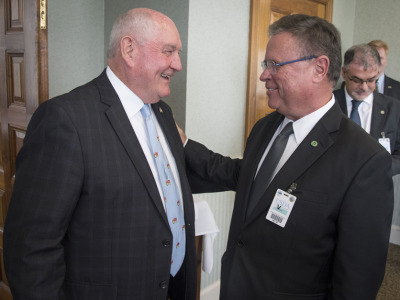 But the audit, along with a June 9 letter from FSIS to Brazil’s Ministry of Agriculture, are clear that the situation likely won't be resolved with a few tweaks to production practices.

“FSIS continues to evaluate your response to the FSIS audit as part of its overall assessment of Brazil's meat inspection system to assure that it remains equivalent to that of the United States,” the agency told Brazil. “The answers to these questions and FSIS's audit findings will guide the scope and frequency of future equivalence verification activities. Future verification activities may include additional in-country audits and increased frequencies at which FSIS reinspects products from Brazil at the United States point-of-entry.”

The U.S. government source said that even if FSIS eventually reinstates Brazil’s equivalency designation, the U.S. could step up port monitoring of future Brazilian beef shipments as a precautionary measure.

But it’s been four months since the U.S. banned Brazilian raw beef, and critics in the U.S. are faulting USDA for even giving Brazil an equivalency status in the first place.

“Why are we still recognizing Brazil as having an equivalent food safety system when over the past decade USDA auditors find the same problems over and over again?” said Wenonah Hauter, executive director of Food & Water Watch. “The USDA should stop playing Russian roulette with our health. The time has come to stop all meat imports from Brazil and eliminate it as a country eligible to export its meat products to the U.S.”

Rep. Rosa DeLauro, D-Conn., known for dedication to food safety, agrees that Brazil has a lot of work to do if it wants to keep its equivalency status and resume beef exports.

“FSIS’s most recent audit reaffirms what we have known for years — that there are underlying structural problems with Brazil’s meat inspection system,” DeLauro said. “Specifically, this latest report shows Brazil’s meat inspection system is failing to the meet basic requirements needed to ensure sanitary conditions and to prevent product contamination … To put it simply, we have not yet seen solutions to the problems that led the United States to halt meat imports from Brazil in the first place.”

Brazil is a major beef exporter globally, but not to the U.S. It was just last year that the U.S. lifted its ban on fresh beef after the country convinced the U.S. that Brazil was effectively controlling outbreaks of foot and mouth disease.