President Donald Trump’s repeated threats to pull the U.S. out of the North American Free Trade Agreement have kept the U.S. ag sector on edge for months, but many have been able to dismiss the comments as just part of a particularly aggressive negotiating tactic.

That time has passed, though, and farm sector leaders are expressing concern that Trump may have no intention of allowing the current NAFTA negotiations to succeed.

Whether it’s through so-called “poison pill” proposals designed to doom the talks to failure or whether the White House will simply pull the plug, severing decades-old ties with Mexico and Canada, the prospect of an end to NAFTA is prompting an onslaught of lobbying from CEOs, lawmakers and state leaders across the country.

The dairy industry has a lot to lose if NAFTA is scuttled. Mexico - with its 135 million consumers - is the largest foreign market for U.S. dairy products, and the trade pact insures that there are no tariffs on U.S. shipments south of the border.

The fear over losing those exports and the ramifications on U.S. farmers and processors is why the International Dairy Foods Association hosted a visit last week to Washington for CEOs of three of the largest dairy companies in the country.

“The U.S. industry milks one day a week for exports,” said Andrei Mikhalevsky, CEO of California Dairies Inc., a cooperative owned by 400 dairies that produce 43 percent of all the milk that comes out of the state. “If that milk were to come back into the United States, it would be disastrous for farmers.”

Mikhalevsky, Darigold CEO Stan Ryan, and Hilmar Cheese CEO David Ahlem met with White House officials and lawmakers during their visit to Washington. One of the questions they asked is whether the Trump administration is serious about seeking a successful NAFTA renegotiation.

“Is this a negotiating effort or is it a meaningful withdrawal?” said IDFA President and CEO Michael Dykes at a press conference with the three CEOs. “If this is (Trump’s) negotiating strategy, that’s fine … If it’s a plan to withdraw, that has significant consequences for our sector.”

It’s the uncertainty that threatens their businesses and investments that brought the CEOs to Washington, said Ahlem.

“Where is the administration on this?” he asked. “Because of the uncertainty and not knowing the answer – that’s why we’re here.”

It’s the question that a lot of farm groups are asking now, said Darci Vetter, diplomat in residence at the University of Nebraska’s Clayton Yeutter Institute of International Trade and Finance.

“That’s the $64,000 question,” she said. “How real is this threat of withdrawal. Because we don’t know the answer, everyone has to treat it as in fact a real threat.”

“Our trade deals need to be better, but I’m really worried about Missouri agriculture, which is the backbone of our economy,” she said. “Nothing the (USTR) said reassured me. I’m very concerned that Missouri agriculture is going to pay a big price for the trade policies of this administration.”

It seemed like the barrage of messaging from farm groups and farm state lawmakers may have gotten through to Trump, according to Senate Agriculture Committee Chairman Pat Roberts. Last week, Roberts said, Trump reassured him that NAFTA would survive.

“Before I could even say Merry Christmas, Mr. President, he looked at me and put his thumb up and said, ‘We’re going to be all right on NAFTA,’” Roberts said in a C-SPAN interview moderated, in part, by Agri-Pulse and recorded Friday morning. 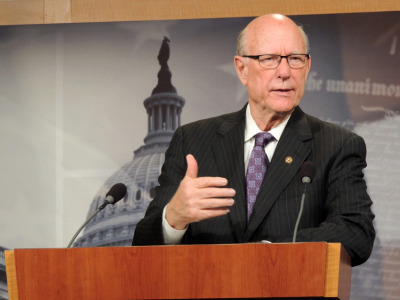 Trump spent part of Friday at a rally in Pensacola, Florida, talking about trade and he railed about the “horrendous” NAFTA and U.S. trade deal with South Korea, also known as KORUS.

“We’re going to hopefully keep NAFTA,” Trump said to a cheering crowd, “but there’s a chance we won’t. And that’s OK. That’s OK.”

“You ask any Kansas farmer what country represents the largest market for hard red winter wheat and he’ll tell you it’s Mexico,” Roberts said at a NAFTA event held Tuesday by the Washington International Trade Association. “U.S. agriculture has grown because of agreements like NAFTA. From the farmer in the field to the grocer in the store, American workers have benefited from that growth. Canada and Mexico have been continuously ranked as the top destinations for U.S. exports since NAFTA was signed into law.”

The question of whether Trump intends to pull the U.S. out of NAFTA may even be more difficult to answer than anyone suspects, according to Max Baucus, a former Montana senator and co-founder of the group Farmers for Free Trade.

Ridiculing NAFTA and other free trade agreements helped get Trump elected, Baucus told Agri-Pulse Tuesday, but he has since learned the massive benefits of trade.

“I think that (the Trump administration) doesn’t know whether they’re going to pull out or they’re negotiating for a better deal,” he said. “I think they just don’t know yet.”