Despite Trump tweets, NAFTA talks moving along quite nicely

WASHINGTON, Aug. 30, 2017 – Discounting President Donald Trump’s repeated negative comments – whether in speeches or tweets – the renegotiation of the North American Free Trade Agreement is moving quickly, positively and without animosity, according to ag sector and government sources.

“We are in the NAFTA (worst trade deal ever made) renegotiation process with Mexico & Canada. Both being very difficult, may have to terminate?”

That was a Sunday morning Tweet by Trump, but it left officials involved in the negotiations scratching their heads.

Negotiators are all on an accelerated schedule to try to wrap up the overhaul of the massive trade pact between the U.S., Canada and Mexico by the end of the year in an unprecedented seven rounds. Sources say so far, so good.

Normally the first round of negotiations for trade pacts of this size are taken up with long expositions on policies and views from the countries involved, but that wasn’t the case this time. Lots of proposed text – mostly from the U.S. – was laid out and debated when all three sides met a little over a week ago in Washington.

“Usually you go to these meetings and there’s not much text tabled, but this was quite the opposite,” according to one source with knowledge of the proceedings.

There was even some discussion between all three sides on a U.S. proposal for the new, modernized NAFTA to contain a shared biotechnology approval process, the source said. The unpublished proposal seeks to allow the three countries to accept each other's approvals of biotech traits without a separate approval.

That was a major step toward a goal shared by most in the U.S. agricultural sector – something farmers, seed companies and exporters wanted to see in the Trans-Pacific Partnership, from which the U.S. has withdrawn, but failed to get.

More talks and possibly some specific text on a biotechnology agreement are expected in the second round that starts Friday in Mexico City, sources tell Agri-Pulse. Then it’s on to Canada where the third round is scheduled to take place Sept. 23-27.

One of the brightest developments in the talks has been Mexico’s enthusiasm to protect the dairy trade that has developed under NAFTA. The National Milk Producers Federation and the U.S. Dairy Export Council met with their Mexican counterparts and government officials in Guadalajara, Mexico, on Aug. 24 and NAFTA was the center of the talks.

Both sides issued a statement stressing the benefits that non-tariff trade under NAFTA has brought to the U.S., Mexico and Canada while expressing a willingness to “seek avenues to improve commercial trade that currently exists among the three countries by ensuring the free flow of dairy products and eliminating any possible trade barriers.”

In fact, U.S. Dairy Export Council CEO Tom Vilsack tells Agri-Pulse that the Mexicans are joining with the U.S. to demand that Canada relinquish what they call unfair trade practices. 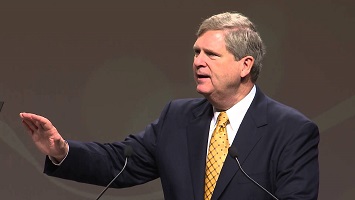 In the joint statement, the U.S. and Mexico urged that Canada abandon its new milk pricing scheme “which could significantly harm milk producers and processors in both Mexico and the United States of America.”

Canada’s Class 7 dairy pricing scheme, which effectively barred some U.S. producers from supplying Canadian processors, has drawn sharp criticism from both the U.S. dairy industry and the Trump administration.

“Canada’s special Class 7, intended to promote their own production of milk powders, goes against any common-sense discussion,” Vilsack said in recent testimony before the House Agriculture Committee. “How come a country that has supply management, and has one of the highest farm-gate dairy prices manages to export product at the lowest prices in the world?”

Still, farm group representatives and lawmakers have expressed concerns that Trump could upset the talks with his continued insistence that Mexico will pay for a wall along the U.S. southern border.

With less than a week before the second round of negotiations is set to start in Mexico City, Trump tweeted: “With Mexico being one of the highest crime Nations in the world, we must have THE WALL. Mexico will pay for it through reimbursement/other.”

So far negotiators and key players in the process have been able to look past the controversial comments.

They have nothing to do with the actual negotiations, several sources said.

One source involved in the negotiations stressed that most people have so far been dismissing Trump’s comments as bluster aimed at making political points with his base of supporters and keeping negotiators from other countries on edge.

Vilsack, meanwhile, had some advice for the negotiators.

“We encouraged the folks in Mexico to essentially just focus on what’s happening within the four walls of negotiation and not to spend a lot of time or attention … on what is occurring outside the four walls,” Vilsack said.