When you think of the challenges farmers face finding good workers, the first areas that come to mind probably are along one of the U.S. coasts. But the problem is also affecting the nation’s Heartland, where states like Iowa are facing an ever-worsening labor shortage.

“One of the trends in the past few decades is that the labor shortage faced by agriculture has changed,” said Chuck Conner, president and CEO of the National Council of Farmer Cooperatives and chairman of the Agricultural Workforce Coalition. “While it used to be a problem just for specialty crop producers on the coasts, we’ve seen it become a national problem impacting a wide variety of commodities – animal agriculture in particular.”

For example, Iowa’s 4th Congressional District ranks as one of the nation’s most highly productive agricultural districts with over 13 million acres of farmland and a home for over 37 million laying hens, 10 million pullets, 13 million hogs and pigs, and dozens of dairies, according to the most recent U.S. Census of Agriculture.

Many of the crop and livestock operators who live there are having a tough time finding people who want to work on their farms.

“It’s tough to get people to want to do what we do,” says Ben Albright, row crop farmer near Lytton, Iowa. “A lot of people don’t want to work hard anymore.”

The 2016 Iowa Workforce and the Economy report showed unemployment rates trending down for the sixth consecutive year in 96 of the 99 Iowa counties. Additionally, data compared between the 2007 and 2012 U.S. Census of Agriculture shows an 11 percent increase in demand for on-farm paid laborers in Iowa.

But where to find good workers?

“We need a clear path to legal immigration and work programs like H-2A, but, it must be an enforced and enforceable plan,” says Andrew Lauver, a Rockwell City, Iowa farmer and current agricultural law student at Drake University. “In our area, we are struggling to find a labor force to drive trucks and tractors, and over time this void will either be replaced by autonomous vehicles or immigrants in some cases.”

Nationally, requests for foreign workers have also increased. According to the Labor Department’s Office of Foreign Labor Certification, applications for seasonal H-2A visa workers just in the first-half of 2017 equaled 97 percent of the total applications for the entire fiscal year 2016.

But the desire for more immigrant labor and reform of federal immigration policy often puts Fourth District farmers at odds with their congressman, Rep. Steve King. The Republican takes a hard line against illegal immigration and has expressed skepticism about the need to reform the nation’s immigration laws – suggesting that local labor is available. 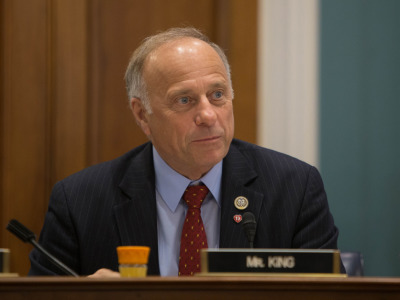 The measure passed 17-16, with two Republicans who have been especially critical of illegal immigration voting against the measure, Steve King of Iowa, and Louie Gohmert of Texas.

King disputes industry arguments that farmers and meat processors can’t find sufficient domestic labor, and he expressed concern during the committee debate that meat processors could use the bill to replace their existing workforce with lower-paid H-2C workers.

“He is mistaken that we can man those operations with current workers; people don’t want to come, and these farms are 24/7,” explained a Fourth District dairyman who asked to remain anonymous when speaking about King’s views. “Immigrants see this as an opportunity; they are more than happy to work.”

Gene Noem, the chief people officer for Reicks View Farms near Jerico, Iowa, agrees that there are challenges associated with attracting high-quality farm workers. The pork producer currently lists nine open positions on its website, with several of the job descriptions in Spanish.

“I don’t know if Congressman Steve King is specifically thinking this, but there are people that don’t understand that we have a seasonal nature to our work and it’s hard for an individual to support themselves and their families by working 16 or 20 weeks a year in a construction equipment installation business, as an example” says Noem.

“There is work here, and we do reach out, and we do advertise… but the audience we’re speaking to is getting to be fewer and fewer people, and it is a numbers game” says Noem. “If we want people to be in rural America, we must show them the opportunities, but they’ve got to want to be here as well.”