Prepare to report your manure emissions?

Farm and environmental groups are sparring over the number of animal feeding operations subject to new emissions reporting requirements, and how extensive those requirements should be, as a reporting deadline approaches this month.

At issue are manure emissions from poultry, cattle and swine operations, which after years of legal wrangling must begin notifying the federal government later this month of ammonia and hydrogen sulfide emissions if they exceed 100 pounds/day. The D.C. Circuit Court of Appeals, which has given the Environmental Protection Agency extra time to provide guidance to animal operators, is expected to issue its “mandate” – essentially, an order closing a case – on Jan. 22 in litigation that has been active since 2009 over emissions reporting for animal feeding operations.

In 2008, EPA exempted all farm operations from continuous release reporting under the Comprehensive Environmental Response, Compensation, and Liability Act (CERCLA, also known as the Superfund law) and all but the largest operations from reporting to state and local emergency agencies under the Emergency Planning and Community Right-to-Know Act (EPCRA) law. The D.C. Circuit Court of Appeals struck down the exemption in April, and since then EPA has been struggling to figure out how to implement the reporting requirements for farm operations.

The court granted EPA a couple of delays to enforce its decision, during which time EPA has released interim guidance exempting facilities that use substances in the course of "routine agricultural operations" from EPCRA reporting. The basis for the exemption is language in EPCRA stating that a hazardous chemical as defined in EPCRA does not include “any substance to the extent it is used in routine agricultural operations.”

But despite nearly a decade of fighting over which operations should be subject to the reporting requirements, disagreement remains over the number of operations affected and what they should have to report.

EPA estimated in early December that about 45,000 farming operations nationwide will be subject to the emissions reporting requirement, at a cost of about $15 million per year.

But the National Cattlemen’s Beef Association, in comments submitted to EPA last month on the impact of the new reporting requirements, said EPA’s estimate is “woefully inadequate and vastly underrepresents the universe of producers who will be impacted by these reporting requirements.” NCBA says that 68,313 beef cattle operations in the United States will have to report their emissions.

A big part of the reason EPA’s estimate is so low, according to NCBA, is that the agency did not count pasture-based operations in its total. In recent guidance posted on its website, EPA clarified that emissions from pasture-raised cattle needed to be reported.

But “requiring pasture-based operations to report using tools provided on EPA’s webpage (research that focuses exclusively on grain-fed animals) is inadequate, and will lead to substantially inaccurate reporting,” NCBA said. “Since pasture-based operations are now required to report, according to EPA’s website guidance, EPA has a duty to develop a methodology for farmers to calculate those emissions, and in the interim, provide ample flexibility in what the agency accepts as a completed report.” 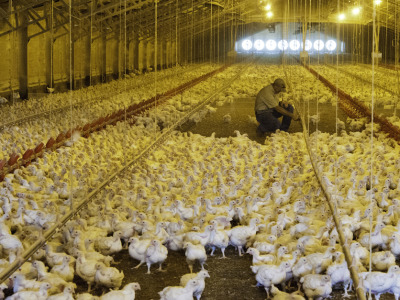 and National Chicken Council – joined by 14 other associations and companies – put the number of affected poultry operations at more than 141,000 and the cost of reporting at more than $47 million.

They and other livestock groups told EPA that the lack of reliable scientific methodology makes it impossible for them to accurately estimate the amount of emissions that manure is producing. The poultry industry urged EPA to adopt a disclaimer that farms can attach to their reporting forms saying that “there is no published estimation methodology that allows me to estimate total daily emissions that may come from the natural breakdown of manure on my farm” but that a “good-faith effort” has been made to do so.

NCBA urged EPA to do the same for pasture-based operations because the “lack of research on ammonia and hydrogen sulfide emissions of pasture-based animals … will result in almost guaranteed inaccuracy of reports” filed by those operations.

Environmental groups offered a different perspective. The Humane Society of the U.S. said EPA’s projection that operations would spend 11 hours and $333 to prepare each report vastly overestimates the amount of time needed.

“Eleven hours and $333 per facility is unreasonably high for even the first year – the year when, according to EPA’s guidance, a facility owner is only required to create an initial report by calculating a worksheet and then submitting the release notifications,” HSUS said in its comments. “In the second year, EPA’s estimated burden and cost is no longer unreasonable – it is laughable. During the second year, in EPA’s view a facility owner only needs to double-check that the facility has not made any significant changes and then submit identical reports from the first year.”

Other environmental groups also criticized EPA’s decision to exempt facilities from reporting of “substances to the extent they are used in routine agricultural operations.” EPCRA reports go to state and local emergency responders, while CERCLA reports go to a National Response Center run by the U.S. Coast Guard.

Earthjustice, an environmental law firm commenting on EPA’s interim reporting guidance on behalf of HSUS, the Center for Food Safety and other groups, said the new exemption is illegal.

Conflicting with the “plain terms of EPCRA, EPA’s Interim Guidance treats the phrase ‘produced, used, or stored’ as coextensive with the term ‘used,’” Earthjustice said.

“Congress included no exemption in EPCRA that would completely shield AFOs from disclosure requirements,” Earthjustice said. “The narrow ‘routine agricultural operations’ provision cannot act as such an exemption.”

An EPA spokesperson said that "based on public comment, EPA is continuing to revise the online guidance and is developing a streamlined continuous release report form for farmers to report hazardous substances emissions from animal waste under CERCLA."