USDA Undersecretary for Trade and Foreign Agricultural Affairs Ted McKinney is a man on a mission, scouring the globe for opportunities to increase U.S. farm exports.

McKinney's travels began shortly after he was confirmed by the Senate on Oct. 3 but picked up quickly. In just the 30 days before Christmas he flew 30,000 miles in 30 days, visiting India, Brazil, Panama, Colombia and elsewhere – and he has no intention of slowing the pace in 2018.

Japan, Malaysia, the Philippines, South Korea, Vietnam, Canada, Mexico, China, Canada, Mexico, Guatemala, Honduras and El Salvador are just some of the destinations where McKinney will likely be getting his passport stamped as he works to build new relationships and rekindle existing ones in order to boost U.S. exports.

Just one day into the new year and the former Indiana Director of Agriculture is already in the UK, where he’s talking about the possibilities of a bilateral trade deal before heading to Brussels.

McKinney, who sat down for an interview with Agri-Pulse before leaving for Britain, said he will be listening more than negotiating while he’s there, but stressed that the underlying reason for all of his travel is to create new trade opportunities for U.S. agricultural producers and exporters.

“Half the battle of winning the game is showing up,” he said. 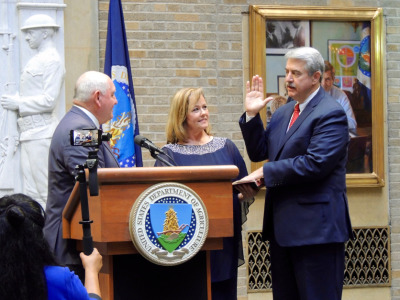 Ag Secretary Sonny Perdue swears in McKinney at a ceremony in October.

McKinney will be showing up in a lot of countries this year. His next scheduled trip is a trade mission that departs on Feb. 26 for Guatemala, El Salvador and Honduras. Dozens of representatives from ag companies and state ag departments will be traveling with McKinney as he meets with government and industry leaders.

Guatemala will be the primary stop and the Central American country is ripe for an increase in trade. As part of the United States-Central America-Dominican Republic Free Trade Agreement (CAFTA-DR) since July 1, 2006, Guatemala has been buying steadily more U.S. corn, wheat, poultry and soymeal. U.S. agricultural exports to Guatemala totaled $1.1 billion in 2016, according to a recent USDA report.

While Central America offers plenty of opportunities to forge new trade ties, Asia is where some of the biggest gains can be made.

U.S. farmers and ranchers are still disappointed nearly a year after President Donald Trump pulled the U.S. out of the Trans-Pacific Partnership, a free trade pact that had promised to boost beef, grain and dairy exports to Japan, Vietnam and nine other Pacific Rim countries.

McKinney said there will be no reversing the decision to exit TPP, but pledged that the Trump administration will be seeking bilateral trade pacts with many of the TPP countries.

USTR hopes for speedy NAFTA redo, but says there’s no deadline
A new farm bill in 2018? Timing will be (almost) everything

When asked about traveling to Asia this year, McKinney said: “Yes, yes and yes. Now, which countries and when is still very much in the discussion phase. We see Asia as a terrific area that we’ve got to continue to invest in.”

Japan will be critical in McKinney’s travels this year, but he stressed the timing will be tricky. The country is still focused on implementing the TPP without the U.S. while at the same time encouraging the U.S. to rejoin.

The U.S. International Trade Commission concluded in an analysis that under TPP, U.S. beef exports would have risen by $876 million per year and U.S. pork exports would have climbed by $387 million annually. Most of those increases would be due to reductions in Japanese tariffs and other trade barriers.

Still, it’s just a matter of time, McKinney insisted. Trump, Vice President Mike Pence and U.S. Trade Representative Robert Lighthizer have all made it clear to Japan that the U.S. would like a bilateral agreement, McKinney said.

“Some of these things take time,” he said. “They have to gel at the right time. Sure, we’d love to do a bilateral with Japan. … We’ll just have to see how the other trade agreements transpire and then we’ll find that opening in whatever form it takes. The ball is in the court of our friends in Japan.”

Beyond Asia, McKinney will also be doing a lot of traveling closer to home this year. He tells Agri-Pulse that he will definitely be visiting both Mexico and Canada, regardless of the outcome of the efforts to renegotiate the North American Free Trade Agreement.

“We have reason to go there no matter what might happen with NAFTA,” he stressed.

The next and sixth round of negotiations to rewrite NAFTA will take place in Montreal later this month, but little has been accomplished so far. The three countries remained sharply in disagreement over several controversial U.S. proposals, such as a U.S. demand that Canada dismantle its dairy supply management system.

McKinney said he is optimistic, though.

“I anticipate we will be going with a new agreement signed by all three countries,” he said, but stressed he’ll lead trade delegations there regardless of the outcome. “They’re going to tie a bow on that one, one way or another, and we’re going to find our way there.”