Critical new funding for the farm bill hangs in the balance as congressional leaders and the White House show little sign of progress toward a broader deal on government spending and immigration.

A continuing resolution that is currently funding the government expires Jan. 19, but Republicans have yet to reach an agreement on spending levels for the rest of fiscal 2018, and Democrats are insisting that any budget agreement include a compromise to allow so-called Dreamers to stay in the country.

Congress will likely need to pass a new continuing resolution next week to keep the government funded into February to allow time for negotiations to continue and final legislation to be drafted.

But with no deal in sight, several important issues for agriculture remain up in the air. They include provisions for cotton and dairy producers that would authorize new funding for the farm bill, relieving some of the budget pressures on the House and Senate Agriculture committees as they prepare to write a new farm bill in coming months.

A GOP member of the Senate Appropriations Committee, Jerry Moran of Kansas (photo above), told Agri-Pulse on the sidelines of the American Farm Bureau Federation convention that he is optimistic the cotton and dairy provisions will ultimately make it into a budget agreement, expanding the projected baseline, or funding stream, for the farm bill.

“It’s a reason that all of agriculture needs to care about the success of cotton and dairy because it makes us able to write a better farm bill in 2018," Moran said.

Also in limbo is a package of 34 tax breaks that have been expired since 2016, including the $1-a-gallon tax credit for biodiesel, and $2.6 billion in emergency aid to Florida citrus growers and other producers who lost crops and orchards to last year’s hurricanes.

South Dakota Sen. John Thune, a member of the GOP leadership and the Finance Committee, told Agri-Pulse that he expects the extenders to get passed, possibly as part of a budget deal. "It will get done," he said of the extenders. "There’s enough interest on both sides that we’ll handle that. The question is not if, it’s when."

President Trump hosted a bipartisan group of House and Senate members Tuesday to discuss a resolution to the immigration issue. Democrats are demanding legislation that would legalize the status of Dreamers, immigrants who were brought to the country illegally as children. Trump shut down the Obama-era Deferred Action for Childhood Arrivals (DACA) program that has allowed the immigrants to stay and work in the United States.

A White House spokeswoman said the meeting was “very successful and productive.” But there was still no agreement on how or when to address the issue. Senate Majority Leader Mitch McConnell told reporters that there was broad GOP support for passing DACA legislation but that it should be considered separate from an FY18 budget deal. Democrats insist that any budget deal include a DACA fix. Trump, meanwhile, is demanding funding for a border wall.

The cotton and dairy provisions, meanwhile, have taken a back seat while congressional leaders negotiate the immigration issues as well as the spending caps for defense and non-defense spending, say two staffers and a lobbyist familiar with the issue. The spending caps and DACA “are the main attractions. We are barely a sideshow," one staffer said. 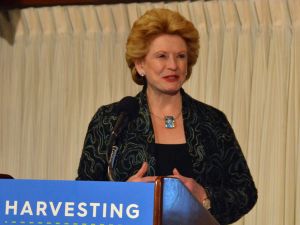 The ranking Democrat on the Senate Agriculture Committee, Debbie Stabenow, told Agri-Pulse that there are ongoing discussions about a resolution to the differences between the House and Senate over the cotton and dairy provisions.

The House last month passed a disaster bill that would revise the farm bill commodity title to make “seed cotton" eligible for the Price Loss Coverage and offset the cost by reallocating existing “generic” acres and making producers who sign up for PLC no longer eligible for the Stacked Income Protection Plan (STAX) insurance program. To help dairy producers, the House bill would lift a spending cap on Livestock Gross Margin (LGM) insurance and pay for the change by expanding a program for eliminating duplicate food stamp benefits.

Stabenow objects to the House approach, saying it doesn’t do enough for dairy producers and unfairly taps the Supplemental Nutrition Assistance Program to pay for the LGM provision.

Senators also don’t want to fully offset the cost of the provisions, as the House bill does. Senators prefer to write legislation in such a way that it authorizes additional future funding for the farm bill. They can do that because of a quirk in congressional appropriations rules that means lawmakers wouldn’t have to offset the cost of spending authorized after the end of fiscal 2018.

Moran said he expected the final cotton and dairy provisions to look more like the Senate version than what the House passed.