Some new studies suggest that proposals to restrict the amount of crop insurance subsidies that larger, high-earning farmers receive could push the least riskiest farmers out of the program, or force them to restructure in ways that would allow them to skirt the limits.

An analysis by economists at Kansas State University showed that a cap on premium subsidies hit a widely variable but significant percentage of farms depending on the crops that they grow. Similarly, imposing a means test on farms could in some years increase the program’s loss ratio.

“Kicking out the big farms increased the loss ratio and would require a rate increase on the remaining small farms,” says Kansas State economist Art Barnaby, a study co-author.

A second study that Mississippi State University economists completed in December, but haven’t published yet, found that the largest farms were on average 25 percent less likely to receive indemnities than smaller operations, suggesting that large farms are less risky than smaller ones. (A working paper summarizing their results was released Wednesday.)

The Mississippi State economists obtained crop insurance records from 2000 to 2009 - later data are not available from USDA’s Risk Management Agency - and used information on farm size and yield losses to project indemnities for farm units. 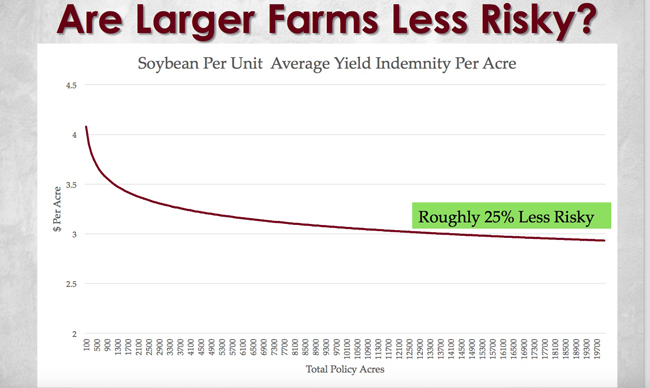 largest farmers rather than on the smallest farms. (See graphic.) Results were similar for corn.

“If you have two units that are 100 acres and one of them is part of a 300-acre farm versus a 3,000-acre farm, the one that is on the 3,000-acre farm is apparently less risky,” said Mississippi State economist Keith Coble, who summarized the findings during a policy briefing at the American Farm Bureau Federation's recent annual convention.

Coble, who recently advised RMA officials of the findings, noted that the impact on indemnities would be muted in real life because most farmers insure their revenue, not just yield, and the price risk is the same for all farms regardless of size. He surmises that better capitalized large farms are simply better managed than small ones. The authors are currently writing a working paper on the research.

“My speculation is that our best farmers even in these tough times are growing and they’re  growing because they’re very cost effective. They’re managing really well,” he told Agri-Pulse.

The findings come as the Senate and House Agriculture committees are gearing up to write a new farm bill. Critics of the insurance program are virtually certain to try to amend the program on the House and Senate floor to cut premium subsidies to large farms.

The Trump administration’s fiscal 2018 budget, released last spring, proposed a series of restrictions that are part of  legislation called the AFFIRM Act, which is sponsored in the Senate by Arizona Republican Jeff Flake and in the House by Rep. Ron Kind, D-Wis. One provision would cap premium subsidies at $40,000 per farmer. A second would set an income limit on policy holders; the Kansas State University economists evaluated the impact of limiting participation to people with adjusted gross incomes below $500,000 and $250,000.

On average, a farmer would hit the $40,000 subsidy cap at 1,500 to 2,500 acres, depending on the crop and location. However, the impact would vary widely. Fruit and vegetable growers, for example, could reach the cap with a few hundred acres or less.

Nearly 17 percent of Kansas farmers who participate in the Kansas Farm Management Association  (KFMA) would hit the cap. (Farmers would have to pay the full cost of the premium after they reached the cap.)

The impact of a means test would raise different challenges for producers because it could affect them in one year and not the next, depending on fluctuations in commodity prices and other factors, according to the findings.

But a means test could have an impact on producers even if they aren’t affected  by the income limit, by increasing the loss ratio for the program, a finding that dovetails with what the Mississippi State found.

“The removal of the highest grossing farms (as measured by the highest AGI farms) appears to increase the loss ratio in several years, which would result in higher premiums being charged to the remaining farms in the pool,” the Kansas State economists wrote. 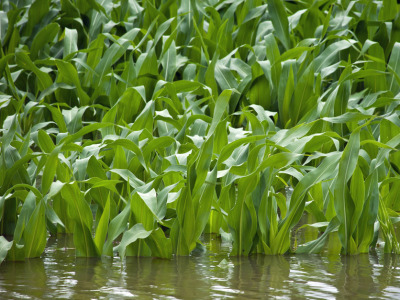 The economists question, however, whether large farms would simply forego crop insurance, or cut back on coverage, if these restrictions were to become law. After all, that would mean leaving a lot of money on the table. Farmers would likely find ways to avoid there restrictions, the economists say.

“As a first step, they will likely create new ‘paper’ farms,” the economists wrote. “If they have a spouse, then farmers will try to get a second crop insurance policy for their spouse and divide the acres between two ‘farms,’” Other farms will create new entities to get around the limits. At the very least, the limits would create new paperwork burdens for farmers, companies and agents, the economists say.

Brandon Willis, who ran the Risk Management Agency during President Obama’s second term, called the Mississippi State findings “compelling.” He said the agency tried to gather similar data during his tenure. He said he would also like to see a further analysis of farm size and adjusted gross income.

“The type of information Keith presents will be invaluable when key decisions are made in the next farm bill. Many of the crop insurance ideas thrown out recently by D.C. special interest groups are poorly thought out, disconnected from reality, and will cause more harm than good,” Willis said.