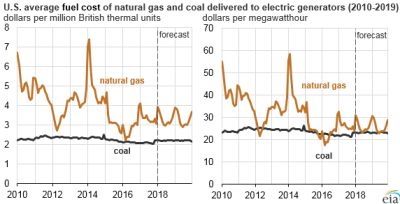 Consistent pricing ensures that natural gas will continue to dominate as the American fuel of choice through the next two years. The U.S. Energy Information Administration (EIA) projects that the total electricity supplied by natural gas-fired power plants will average 33 percent in 2018 and 34 percent in 2019, surpassing its 32 percent share in 2017.

Power plant operators are scheduled to bring 20 gigawatts (GW) of new natural-gas-fired generating capacity online in 2018, which, if realized, would be the largest increase in natural gas capacity since 2004. Almost 6 GW of the capacity additions are being built in Pennsylvania, and more than 2 GW are being built in Texas. Forecasts show a 2 percent decline in the cost of natural gas, which has generally averaged $3.50 per million British thermal units.

EIA expects coal generated power will see a continued decline, falling to a 28 percent share in 2019. The former predominant fuel source held a 30 percent share in 2017 and should hold that share through this year. the EIA says. However, about 13 GW of coal power is scheduled for retirement in 2018, with plants closing in Texas and the Eastern region. Delivered cost of coal will likely rise by 5 percent.

Meanwhile, renewables are gaining market share, thanks to changes in fuel costs and technological development. EIA expects the average annual U.S. share of total utility-scale generation from non-hydro renewables to exceed 10 percent for the first time in 2019.

This week’s guest on Open Mic is Roger Johnson, President of the National Farmers Union. Earlier this year the North Dakota native announced he’ll not seek re-election. Johnson and NFU support policy to keep more farmers on the land and remain concerned about the economic health of rural America. Johnson offers his thoughts on agriculture’s place at the table on climate policy, his frustration with the EPA’s administration of the renewable fuels standard and challenges developing the next farm bill.
Listen Here

President Donald Trump rolled out his fiscal 2021 budget, kicking off a process on Capitol Hill that led to some news on the Market Facilitation Program. More on that and an update on the current state of play with U.S.-China trade in this week's video.