Sugar tensions heat up ahead of farm bill

U.S. sugar farmers want to keep restricting the inflow of foreign supplies just as much as much as sweetener users – think candy and food companies – want to increase imports and push down prices. As a result, friction between the two sides is heating up as Congress prepares to write the next five-year farm bill.

Perhaps the first shot in the conflict was an original proposal from the Sweetener Users Association (SUA) that’s been adopted as legislation circulating in the House and Senate. The farmers and refiners represented by the American Sugar Alliance (ASA) say that bill, the Sugar Policy Modernization Act, would effectively gut the safety net that makes it possible for the U.S. to have a domestic sugar crop.

The SUA – which represents companies that make products like M&Ms and Reese’s Peanut Butter Cups – says the bill simply forces the U.S. sugar market to be more market-driven and less insulated by government policy.

Bill O’Conner, a policy expert for Watkinson Miller PLLC, made the case for the sugar buyers during a contentious panel at the International Sweetener Colloquium last week in Orlando, Fla.

“We’re not quite sure that … sugar producers have some sort of God-given or constitutionally protected right to stay in business,” O’Conner said sardonically before the crowd of sugar refiners, buyers and producers. “We’re not sure that they should be isolated from the kind of change that everybody in business is subject to.”

While the U.S. essentially maintains a complex supply management system to protect the country’s sugar farmers, the ASA argues it only does so out of necessity to protect domestic production from influxes of often cheaper sugar produced under heavy subsidies in countries like Brazil and Thailand.

Jack Roney, director of economics and policy analysis for the ASA, sat on the same panel as O’Conner and hit back for more than 20 minutes, defending the country’s cane and beet farmers and explaining why food and candy companies are much better off supporting the survival of domestic sugar farmers and not putting all of their faith in imports. 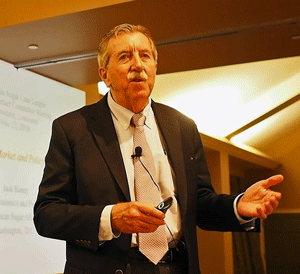 A key point he made was that if the U.S. government were to allow U.S. sugar farmers and their affiliated processors to be crushed under the weight of cheap imports, the sweetener users would be reliant on lower quality, less sustainably produced sugar from countries that are often thousands of miles away and cannot supply product quickly.

“What would the consequences be for the sweetener users?” Roney asked rhetorically. “They would lose the just-in-time delivery that U.S. producers can provide and they would have to build storage facilities.”

In other words, the sugar might be cheaper but there would be far less control over the timeliness of deliveries and that would mean users would likely have to spend a lot of money to build silos to keep the foreign product until they needed it.

Food and candy companies aren’t directly demanding that USDA allow in more foreign sugar through its tariff rate quota (USDA sets the quota above a WTO-mandated minimum and the U.S. Trade Representative assigns individual slices of that quota to foreign suppliers), but they are asking Congress to tell USDA to make sure there’s more sugar on the U.S. market.

China’s purchases of new crop soy from the US heat up in August
Conaway assures sugar producers of his support in next farm bill
Farm relief, SNAP benefits in play as aid talks heat up

Currently the USDA spends a lot of time and effort trying to keep a balanced market that allows enough foreign sugar onto the market while also keeping prices high enough to prevent farmers from going out of business. There’s no federal mandate for what that ratio needs to be, but the USDA attempts to keep it between 13.5 and 15.5 percent, generally considered to be the sweet spot between the needs of producers and buyers.

Both the House and Senate versions of the Sugar Policy Modernization Act – the legislation that’s designed to eventually be an amendment to the 2018 farm bill – call for the USDA to try to keep the stocks-to-use ratio at the high end of the spread. The bill proposes that by 2021, USDA aims to keep the ratio at a minimum of 15.5 percent.

Rep. Virginia Foxx, R-N.C., together with Democratic Reps. Earl Blumenauer of Oregon and Danny Davis of Illinois, are leading support for the House bill. Sen. Jeanne Shaheen, D-N.H., and Patrick Toomey, R-Pa., are behind the Senate effort.

“If there’s one thing I’d like to communicate about the sugar program, it’s this: The federal government should not be controlling how much sugar is produced in this country and what the price of sugar should be,” Foxx said in November when the bill was unveiled.

“It’s not an attempt to undo or destroy farm policy,” said O’Conner. “It’s not a repeal.”

But that’s not how sugar farmers see it.

The legislation, if adopted into the farm bill, would also essentially do away with non-recourse loans and the Feedstock Flexibility Program, which guarantees USDA will buy up surplus sugar if there is too much on the market. When the USDA issues non-recourse loans, farmers can pledge the future sugar harvest as collateral and USDA must be willing to accept sugar in lieu of repayment of the loans.

All of that, together with the higher stocks-to-use ratio, would put most of the domestic sugar industry out of business, Roney said.

Bankers, he said, won’t back loans to farmers without a safety net in place, adding: “They’ve got to know there’s some insurance that even if there’s a natural disaster or price catastrophe, that their loans will still be satisfied.”