Farmers and ranchers still like Trump, but support has eroded

The farmers and ranchers who helped put Donald Trump into the White House still give him fairly high marks, but there appears to be some erosion in the number who would like to see him re-elected, according to a new Agri-Pulse survey.

The nationwide telephonic survey of 750 farmers and ranchers covered a wide variety of topics, including perspectives on Trump’s and Ag Secretary Sonny Perdue’s performance during their first year in office, top grower concerns and potential farm bill changes. The phone calls were conducted from Feb. 26-March 9 by Aimpoint Research.

Overall, Trump’s approval rating in farm country is significantly higher than the general population. Almost 51 percent say they strongly or somewhat approve of how the president is handling his job. That number jumps to over 54 percent when we looked at Republicans and Republican-leaning respondents. A whopping 96 percent of Democrats don’t like his actions.

Support for Trump in farm country is significantly different than in urban areas. In the latest Quinnipiac University National Poll, only 36 percent approved of Trump out of 1,249 voters nationwide. In farm country, Trump is still “above water,” but his disapproval rate is not far behind at 46 percent.

Recognizing his strong rural base, Trump has probably had more rural outreach events

than any president in modern history, like this one in Cedar Rapids, Iowa (pictured above),

where he was warmly received by Iowa farm leaders.

Perdue, who was confirmed in late April of last year, has slightly higher approval ratings than his boss, with 64 percent saying they either strongly or somewhat approve of his performance, compared to 36 percent who disapprove.

Almost 67 percent of the survey participants said they voted for Trump, versus only 24 percent for Hillary Clinton.

But when all respondents were asked if they would support Trump’s reelection, only 45 percent said they would do so, representing an almost 20 percent drop in support from both Trump and Clinton voters. However, many may be reserving judgement to see how some of his actions play out: Another 18 percent said they did not know how they will vote in 2020.

"The farmers I talk to are very concerned about trade, and while they are willing to give the President the benefit of the doubt in the hope that his actions will result in better deals, folks are getting pretty nervous," says Blake Hurst, a Tarkio, Missouri, farmer who leads the Missouri Farm Bureau. Plus, Hurst says there may be a delayed reaction on the benefits of the tax cuts. "Unlike wage earners who are seeing an increased paycheck because of lower withholding, farmers won't see the actual benefits of the tax cut until next year, as they prepare for March 1 tax deadline."

Gordon Stoner, a Montana wheat grower who is the immediate past president of the National Association of Wheat Growers, also says that President Trump's actions on trade are causing anxiety for farmers.

"As Trump’s rhetoric becomes reality, rural America is coming to realize the potential economic impact on their checkbook and may vote accordingly in future elections. Ag depends on robust export markets and the President’s actions in the trade arena are damaging ag."

When asked about important issues facing the country, concerns about terrorism once again surfaced as a top concern. But the second most popular ag-related response was “securing an adequate labor supply.” That’s an issue that typically scores high in fruit- and vegetable-growing regions of the country, but 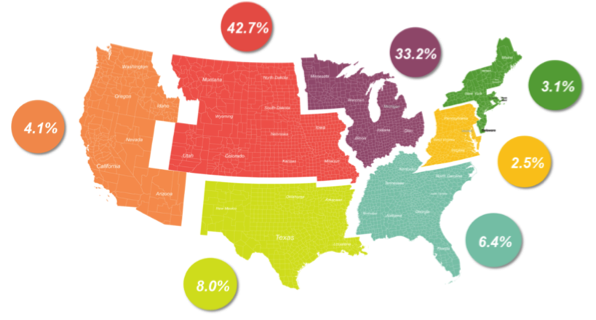 75 percent of the participants largely hailed from the Plains States through the Midwest - underscoring how difficult it’s become for farmers in all parts of the country to find a labor force.

For farmers and ranchers struggling to find good workers, “stopping illegal immigration” scored lowest. Respondents were asked to rate a variety of issues from 1-10, with 10 being the highest.

The Trump administration has been focused on removing regulatory burdens on farms and ranches, but our survey group thinks they could do more. When asked about their level of satisfaction on federal actions to remove regulations, the average was 6.12. The recently enacted tax reform package didn’t seem to generate a lot of satisfaction either – generating an average score of 6.01.

National security and an adequate labor supply are most important to farmers, while stopping illegal immigration is less of a priority.

To gauge support for some likely farm bill changes, we asked a series of questions to see if farmers agreed. In general, about two-thirds agreed that cotton or seed should be covered under the Price Loss Coverage (PLC) program, base acres should be reallocated, Agricultural Risk Coverage (ARC) payment calculations should be consistent across county lines, and PLC reference prices should be increased.

There was also strong support for increasing the size of the Conservation Reserve Program, as some lawmakers have proposed. The vast majority, about 85 percent, said the 24 million-acre cap on enrollment in the CRP should be increased. Nearly 75 percent of farmers believe the cap should be increased to at least 31 million acres.

And there was general agreement that funding for most other conservation initiatives should stay the same. The majority also agreed that Swampbuster provisions should be continued, as well as provisions to require farmers who receive crop insurance premium subsidies to meet conservation compliance requirements.

Overall, the majority of farmers believe funding should stay the same across all conservation programs

Swampbuster, conservation compliance should be continued.

Crop insurance remains a top priority. Almost 90 percent of the 750 farmers and ranchers surveyed said they purchased some form of crop insurance and 94 percent said it was somewhat or extremely important to their businesses.