However, many of the president’s actions and words about trade are starting to hit farmers and ranchers where it hurts most: in their pocketbooks. And they fear that relationships with China, Canada, Mexico and other key trading partners may get worse before they get better. So, is political support for Trump wavering as Democrats had hoped?

Asked whether members of the nation’s largest farm organization are saying they’ve had enough of tariffs and trade-terrifying tactics, Duvall said that most of AFBF’s farmers and ranchers are “still holding real tough” in hopes that “we’re going to see trade better than ever for agriculture.”

“Those who are most impacted are real nervous and getting anxious about it to be over. This is a real fluid situation, where every morning we wake up and wonder what tweet or press release is going to come out and might affect the markets.” Duvall pointed to the optimism farmers felt after news reports that China might double agricultural imports on one day and the pessimism a few days later, when the Trump administration announced plans to impose tariffs on the Asian nation.

The market fluctuations have been particularly hard on younger farmers who have not yet developed much equity, Duvall emphasized. “That’s why the impact varies by age, by geography and from farm to farm.”

“We’re trusting and hoping for the best, but our soybeans are already in the ground and we can’t switch to another crop,” says Kentucky farmer Davie Stephens, who serves as ASA’s vice president. “We’re already in a down cycle and we don’t need another hit.” 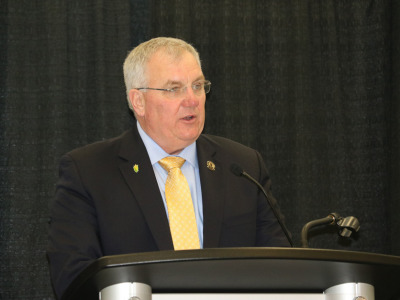 NCGA President Kevin Skunes says his members are also “trying to stay positive” but the uncertainty over the North American Free Trade Agreement and trade with China is making life on the farm even more difficult in an already low-price environment.

“If things go south any further, the president will likely start losing support,” he adds.

With the Trump Administration expected to publish a final list of Chinese goods that will be hit with a new 25 percent tariff by June 15, many farmers and ranchers are bracing for China to retaliate against U.S. agricultural products. Some are already feeling the pain because China slapped U.S. pork with an additional 25 percent tariff back in April. And pork exporters were hit last week by Mexico with a 10 percent tariff that increases to 20 percent on July 5.

“I wish I could tell producers that everything is going to be OK. But we can’t tell them that. We don’t know. We are at the tip of the spear here, and as one of our board members said…we are not only at the tip, that spear is going into us and we’re taking blood,” says Nick Giordano, Vice President and Counsel, Global Government Affairs for the National Pork Producers Council.