Farm Bureau: US farmers can get greener, but they’ll need support

Agricultural greenhouse gas emissions in the U.S., when adjusted for productivity, are down by 24% over the past 30 years, but farmers can do better if Congress and the Biden administration amp up assistance, according to the American Farm Bureau Federation's chief economist, John Newton.

Ag Secretary Tom Vilsack and lawmakers are looking at ways to accelerate the growth of ag carbon markets as a way to reduce U.S. greenhouse gas emissions, but Newton says there is a lot that farmers and ranchers can do to make their operations greener with the tools and programs already available to them — so long as Congress agrees to commit more funds and resources to the efforts.

Congress protected the integrity of the two primary working lands programs in the 2018 farm bill — the Environmental Quality Incentives Program and the Conservation Stewardship Program — but it did not increase funding. Lawmakers only preserved the conservation funding level of the 2014 farm bill ($60 billion over 10 years) and drained money from CSP for other programs.

Working lands programs are very popular with farmers and key to making farming greener, but there is a shortage of USDA personnel needed to provide technical assistance, and the department continues to struggle to fill openings.

“There’s a backlog of projects to be approved,” said Newton, who stressed it may come down to the next farm bill to get the resources needed “to significantly expand some of these programs. … We’ve been spending billions of dollars every year on working lands programs, on land retirement, on EQIP.”

Most programs need to be scaled up if farmers are going to be able to make their operations even greener, but getting more funding is always difficult, Newton said.

Senate Agriculture Chairwoman Debbie Stabenow, D-Mich., suggested in January that an upcoming climate bill could be used to put significant new funding into conservation programs, but Democratic leaders have said little since then about their plans for the legislation. If Democrats use tax increases to pay for the bill, they would risk losing the support of major farm groups. AFBF has indicated that it wouldn't support a partisan climate bill.

Speaking at this week's Agri-Pulse Ag and Food Policy Summit, the top Republican on the House Agriculture Committee, Pennsylvania Rep. Glenn "GT" Thompson, said it is too early to know how much additional money may be needed for conservation programs until the committee reviews the impact of the 2018 farm bill. "That's how we'll determine how we make decisions on how we improve the conservation programs, which we know are very important tools," he said.

While nearly half of all farmland is no-till or reduced till, expansion is not always straightforward. Land and farming conditions are widely diverse and technical assistance needs are just as varied. Farmers’ needs in Arizona or California, where producers can often plant two or three crops in a year, are much different than they are in Iowa or Illinois.

While more funds for programs like EQIP and CSP will be important to back up farmers’ efforts, improving forest management is also important to make sure all of that work and all of the billions of dollars in government funds are not wasted, according to both Newton and Vilsack.

Forestry is the biggest carbon sink in the United States, sequestering 750 million metric tons every year, said Newton, who stressed that represents about 12% of U.S. GHG emissions.

US farmers count on environmental practices to get edge in foreign markets
US ag group: Farmers need new foreign market opportunities
Election outcome could shift focus of US farm support

That’s a fact that’s not lost on lawmakers. Just last week, Democratic and Republican lawmakers in both houses of Congress introduced legislation to help the U.S. Forest Service plant 1.2 billion new trees in national forests over the next 10 years.

“Restoring our national forests will not only support our hunting, fishing, and outdoor recreation economies, it’s also part of the solution to the climate crisis,” Stabenow said as she and other lawmakers introduced the Repairing Existing Public Land by Adding Necessary Trees Act (REPLANT). “Planting trees is a cost-effective way to draw carbon out of the air, restore our public lands, and create jobs.”

But good forest management — something that has been lacking for years — may be even more important than planting new trees, according to Vilsack and Newton, both of whom are participants in this week's Agri-Pulse summit.

“We can do everything in the food and ag space to improve our carbon footprint to get to net-zero as President (Joe) Biden has indicated his goal is … but if we don’t deal with forests in the proper way, and reduce the amount of horrific fires that we’ve had, all of the carbon that we’re sequestering will go up in smoke as those forests burn,” Vilsack said Monday.

A program where the two differ is the Conservation Reserve Program. Vilsack explained that incentives for the set-aside program can be improved to lure more acres into the program without disrupting the marketplace. 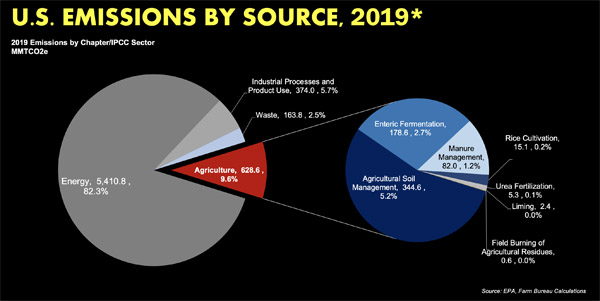 But Newton says CRP is one government program not worth expanding.

About 22 million acres were enrolled in CRP at the end of fiscal 2020. Former House Agriculture Committee Chairman Collin Peterson, D-Minn., proposed legislation in December to increase CRP acreage to 50 million.

But even though U.S. farmers won’t be planting under CRP, those crops will be grown somewhere else around the world, Newton argued. “They’re going to do it in Eastern Europe, Russia and South America.”

(Editor’s note: For more on the economics of carbon farming, listen to Newton and a panel of farmers speak later today, the third day of the Agri-Pulse Ag & Food Policy Summit.)