Lobbyists see a rough path to a farm bill

With House Agriculture Committee Chairman Mike Conaway preparing to bring his draft bill before his panel as early as April 18, lobbyists speaking to the annual conference of North American Agricultural Journalists in Washington this week said they're not fond of waiting for the committee to let them and the public see just what the committee has prepared.

Ellen Vollinger, legal director for the Food Research and Action Center, said “in this dialogue everything seems to be dwarfed by what (people think) Chairman Conaway is proposing ... but there is a lot more on that table, and should be on the table, with respect to this farm bill.”

Pointing especially to the 80 percent of USDA spending that is directed to feeding hungry Americans, she declared that “hunger is still a very large problem in this country” with more than 40 million Americans “living in food insecure households.”

“What we are seeing now is an attempt to take away a safety net for hungry people,” she said, adding that she believes there is enough bipartisan support among lawmakers to support current levels of food stamp eligibility.

Zack Clark, National Farmers Union manager of government relations, meanwhile, wants lawmakers to stick up for farmers in the legislation. “Net farm income has dropped 50 percent in the past four years . . . the next years don’t look a whole lot better. Our members have been worked up about the farm economy for years . . . and it seems like we’re screaming into the wind.” 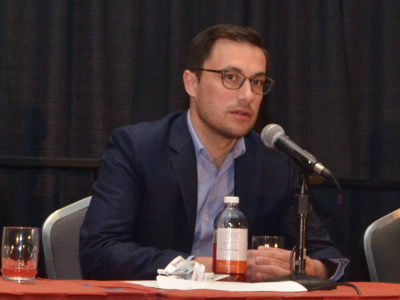 Clark says he hopes the swelling uproar over China tariffs, clean fuel and nutrition programs and other issues might "galvanize agriculture" to ensure a bill that is broadly beneficial. For farmers, NFU wants essentially the current support for the crop insurance program, with continued improvement of “whole-farm” policies to cover crops and livestock on diversified farms. He says NFU is also pushing for some strengthening of Price Loss Coverage, which issues payments to farmers when the effective price of a covered commodity is less than an assigned reference price for that commodity, but “I don’t expect to see it” because of budget constraints.

A prediction for the farm bill’s timeline came from John Larson, senior vice president of the American Farmland Trust, who said he expects to see a markup by the House Agriculture Committee in the next two weeks, and passage of a bill by the Senate Agriculture panel sometime in May.

Farm bill work in the House has become unusually partisan, Larson noted, and “there is just an intrinsic lack of middle anymore.”

Democratic committee members are expecting to just try to block the farm bill this year if they aren’t afforded significant participation in drafting it, and Larson said he thinks Conaway’s lack of disclosure is not helping move Congress toward successful legislation. “I hope that, as we get into the debate . . . that there is willingness to listen first and then come up with some compromises so we can move forward.”

For the conservation title of the bill, he expects “same old, same old,” in line with programs and funding approved in the 2014 farm bill.