Growers warned not to expect quick fix for citrus greening

Florida citrus growers should not expect to receive a silver bullet in their fight against citrus greening, a new National Academy of Sciences report has concluded.

“A single breakthrough discovery for managing (Huanglongbing) in the future is unlikely, since intensive research efforts over almost 20 years have not led to this result,” said the report, which reviewed efforts to date by the state- and industry-funded Citrus Research and Development Foundation (CRDF) in Florida. Huanglongbing (HLB) is the disease spread by the Asian citrus psyllid (ACP), a tiny pest that has caused massive damage to the citrus industry in Florida since it was detected in the state in 1998.

CRDF President N. Larry Black Jr., when contacted by Agri-Pulse, said he had not had time to review the full report. “It’s going to take a few days to get our arms around it,” he said, while thanking NAS for its work.

Before it began wreaking havoc in Florida's citrus groves, the psyllid was not considered a major threat, but now, “essentially all citrus groves are infected,” and most psyllids carry Candidatus Liberibacter asiaticus (CLas), the bacterium transmitted to the trees by the bug, the report said. 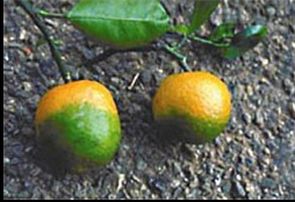 “The infection results in blotchy mottling of leaves, stunting of shoots, gradual death of branches, and small, deformed fruits with bitter juice,” the report says. “Although infected trees do not die right away, they can remain in a steady state of decline for several years.”

Citrus production volume in the state has declined by 58 percent since 2005, the report said, adding that between 2007 and 2014, the disease has lightened growers’ bank accounts by $2.9 billion, or $374 million per year.

CRDF has invested $124 million in 398 projects between 2010 and 2017, about 90 percent of which address HLB. But HLB is “among the most complex of plant diseases, so it is among the most difficult to effectively manage,” the report said. “Intensive research and development efforts funded by CRDF and other agencies have yet to result in a robust set of strategies for managing HLB in Florida citrus groves and nurseries.”

Almost all that has been learned in the past decade of research about the insect’s relationship to its citrus hosts “has served to underscore the biological recalcitrance of the system to management,” NAS said.

The biggest impediments to finding a solution are “the inability to culture the bacteria in the laboratory, the lack of advanced diagnostics for early disease detection, and the absence of standardized research methodology that would improve the comparability of results across studies,” NAS said. “Resolution of any one of these issues would constitute a significant step.”

In Florida, the spread of the disease has “outstripped the pace of research aimed at managing psyllids,” the report said. “Reducing psyllid numbers by any available means is best considered a stopgap, delaying the spread and reducing multiple infections until the disease can be cured or until disease-resistant citrus trees become commercially viable.”

In a 2010 report, NAS recommended developing transgenic HLB-resistant and ACP-resistant citrus. While that remains a goal, and research has identified genetic traits for ACP resistance in citrus and related genera, “neither traditional plant breeding nor cutting-edge techniques for citrus germplasm improvement has advanced to the point of practicality,” the report said.

The NAS report recommended that CRDF consider “specific funding for the development of sets of management approaches that can be combined in different ways, optimized and validated for use in different locations and conditions.”

Among the report’s other recommendations:

CRDF also should consider funding research “to assess consumer attitudes toward GM technologies for producing HLB-resistant citrus cultivars and their willingness to consume genetically modified citrus, as well as how targeted advertising campaigns could be effective outreach strategies.”

Online surveys cited in the report found that most consumers “were willing to purchase GM foods if they were priced at a significant discount.”