Montana beef checkoff under fire – what are the national implications?

Last week’s decision by a U.S. Appeals Court dealt another blow to the Montana beef checkoff and signaled a significant victory for the Ranchers-Cattlemen Action Legal Fund (R-CALF), an organization that’s made no secret about its desire to challenge other state beef checkoff programs and more broadly, other checkoff programs.

The Ninth Circuit’s decision “means that yet another set of federal judges has ruled that the government cannot compel independent ranchers to fund the speech of multinational corporations. This ruling may only apply to Montana, but the momentum towards reform of the entire beef checkoff system is clear,” said David Muraskin, a Food Project attorney at Public Justice who is serving as lead counsel on the case for R-CALF.

In rejecting USDA’s effort to overturn, the court's latest ruling basically upheld a district court ruling, noting that the lower court did not abuse its discretion by finding that the checkoff assessed on Montana beef producers likely violated R-CALF USA’s First Amendment rights. It did not rule on the merits of the case.

The lower court ruled that the USDA’s beef checkoff program is being administered in a way that interferes with ranchers’ First Amendment rights, and that the government should be enjoined from collecting funds for the state program without rancher consent.

“For the first time in over three decades, independent Montana cattle producers have a choice as to whether to continue funding a private message that essentially says that beef is beef regardless of where the cattle from which the beef was derived was born or raised. That generic message is contrary to the interests of Montana ranchers who want to capitalize on the superior beef products that are produced from their high quality, USA-produced cattle,” said R-CALF USA CEO Bill Bullard in a statement.

As the Montana Beef Council points out (see graphic below), the state’s cattle ranchers will still have to pay into the $1/head national checkoff program, but the MBC will only receive its 50 percent share of that money when a rancher opts in. Already, that’s resulted in significantly lower state receipts: $150,000 by the board’s January meeting versus a typical $860,000 in an entire fiscal year that starts in October. 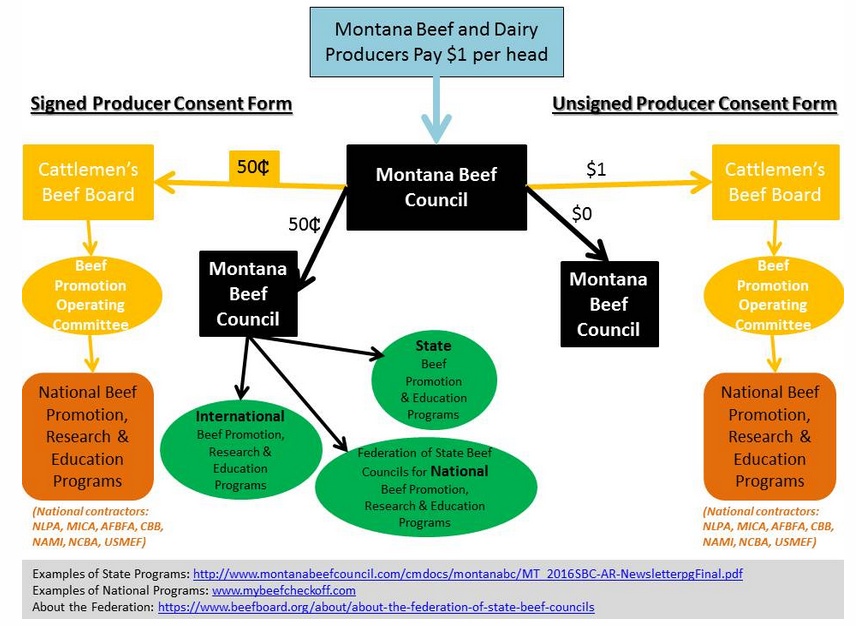 So how much impact will this latest decision have? Ultimately, it’s up to the courts, including a yet unscheduled hearing on the merits of the case before the district court judge in Montana. But at least one lawyer is convinced that other arguments will prevail.

“I don’t want people to panic over this. This is the same situation we had when our case went all the way up to the Supreme Court. We lost in a couple of circuit courts before we got to the Supreme Court,” explained Wayne Watkinson, a partner with Watkinson Miller, who represents dozens of checkoffs and was on the winning side in 2005 when the Supreme Court ruled that mandatory checkoff programs are constitutional if they are overseen directly by the federal government.

“You have to get judges dealing with the right issues. Here, they clearly were not,” he said about the Montana case.

Before the appellate court in early March, Public Justice’s Muraskin argued that the government needs to take more steps to control the Montana Beef Council board if it wanted to compel ranchers to fund its work and messaging.

That’s a point clearly expressed in the Appeals Court dissent, written by Circuit Judge Andrew Hurwitz, who said that the district court erred in granting the preliminary injunction.

“As the Supreme Court has made plain, the critical question in determining whether speech is public or private in the precise context of this case is whether the speech is ‘effectively controlled’ by the government,” Hurwitz wrote. “The Memorandum of Understanding  ... plainly grants the Secretary complete pre-approval authority over ‘any and all promotion, advertising, research, and consumer information plans and projects’ of the MBC. The district court failed to even discuss the Memorandum in granting the preliminary injunction, let alone suggest why it was not a facially enforceable agreement.”

“The dissent got it right and the majority really used a technical, procedural argument to prevent a clear determination that the district judge had abused their discretion,” Watkinson pointed out. “This is R-CALF’s attempt to go after some of the beef councils, believing if they weaken that structure, the national checkoff will go away. This is beef people fighting beef people.”

Yet, Watkinson says, “clearly, the national checkoff program is in good shape. Even the district court judge said there is no concern about the national beef checkoff.”