An industry effort to improve the sustainability of U.S. beef is now available for public consumption, giving outside stakeholders a look at the goals of the U.S. Roundtable for Sustainable Beef (USRSB).

The USRSB last week released its Sustainability Framework, which the Roundtable describes as “a set of resources” that different aspects of the beef supply chain can use “in their efforts to continuously improve the sustainability of U.S. beef.”

The framework offers a sector-by-sector look at sustainability goals in six areas: air and greenhouse gas; animal health and well-being; efficiency and yield; employee safety and well-being; land resources; and water resources. Those goal areas are all measured against metrics for the cow-calf, auction market, feedlot, packer and processor, and retail and foodservice sectors.

While the framework’s goals are numerous, the metrics used to measure progress are, in many cases, very broad. For example, the efficiency and 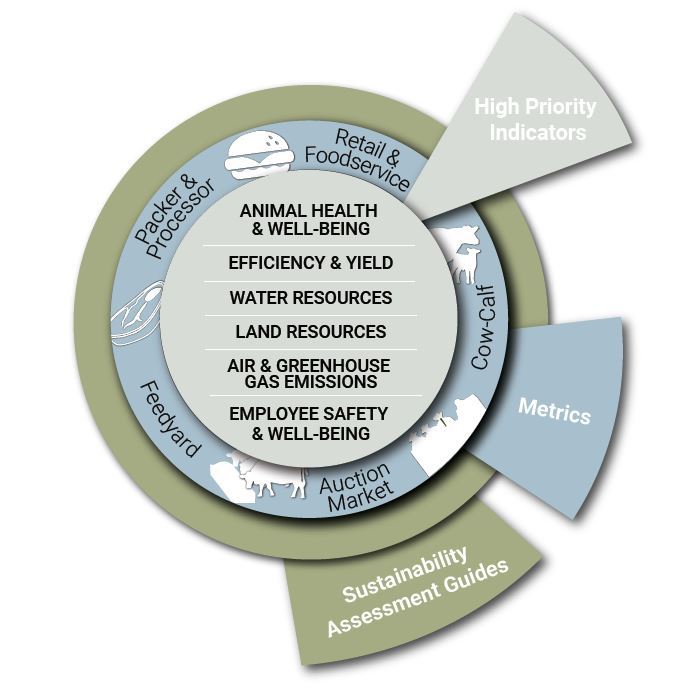 yield category for the feedyard sector is measured by whether or not cattle performance and operational efficiency are traced over time at a given facility. The plan mentions goals of a tracking system, but says success can be determined based on whether or not such a plan is in place rather than on the merits of it.

“Increasing the number of feedyards tracking cattle performance and operational efficiency in the U.S. can have a significant positive effect on the overall efficiency and yield of a specific feedyard and the sector as a whole,” the framework says.

In some cases, the framework involves working with a third-party cooperator. For example, the USRSB calls for a collaboration with Field to Market for tracking feedyard water resources with respect to feed production.

Some goals are much more specific. The employee safety goal for the retail and foodservice sector lists multiple levels of metrics, outcomes, and qualifications for success, such as implementation of a supplier code of conduct, increased ability to “trace the number of employees completing safety and training programs,” and more.

Ashley MacDonald, senior director of sustainability for the National Cattlemen’s Beef Association, said each sector compiled its own goals, metrics, and desired outcomes, which she said will hopefully lead to producers voluntarily recognizing areas of improvement on their own operations.

“This approach celebrates the diversity of the U.S. beef community, while providing enough flexibility to address the unique sustainability challenges across our national production system,” said USRSB Chair Kim Stackhouse-Lawson, a former NCBA staffer who now works as the sustainability director for JBS USA.

Summary USDA data from 2016 counts a total of 30,219 operating feedlots. Of this total, 28,000 feedlots have a capacity of less than 1,000 head and collectively, account for about 19 percent of the inventory on feed as of January 1, 2017, according to the USRSB Framework. Another 259 feedyards, those with capacities greater than 16,000 head, marketed 58 percent of the fed cattle in the 2016 marketing year.

The framework is open for public comment until July 1.