It’s been months since high-level U.S. negotiators sat across the table from their Chinese counterparts to work out a deal to end trade hostilities. Agriculture trade issues were key back then, and they remain integral to any success as President Donald Trump prepares to sit down for talks with Chinese President Xi Jinping later this week in Buenos Aires on the sidelines of the G20 summit, administration officials tell Agri-Pulse.

The list is long, but each issue offers significant benefits for the U.S. ag sector, which has become increasingly dependent on supplying the growing demand from China for grains, oilseeds, dairy, fruits, vegetables and tree nuts.

Trump says he will go into the meeting ready to make a deal, but at the same time he’s warning that he’s ready to hit China with even more tariffs. The consequences of either outcome will be major for U.S. producers and exporters of everything from soybeans to oranges.

Trump, when asked Monday about a potential deal with Xi, responded: “I could. I mean, it could happen. We have a good relationship.”

On the other hand, Trump also threatened in an interview this week with the Wall Street Journal to impose tariffs on another $267 billion worth of Chinese goods as well as hike the tariff rate from 10 percent to 25 percent on an existing $200 billion worth of tariffs already in place.

The U.S. first hit China with steel and aluminum tariffs and then began levying more tariffs to punish the country for intellectual property theft and a policy of forced technology transfer that requires U.S. companies to give up its technology in order to do business in China. China is retaliating on just about every U.S. farm commodity.

A deal, or even the start of one, between Trump and Xi could prevent new tariffs and pave the way for existing ones to come down. That alone would be a major victory for U.S. farmers, who are suffering under a wide range of tariffs. China continues to levy a 25 percent tariff on U.S. soybeans, corn, wheat and sorghum, but the import taxes are even higher for other commodities. Chinese tariffs on U.S. dairy range from 27 to 45 percent, while importers there have to pay up to 50 percent in new import taxes on cherries, almonds, oranges and lemons.

The umbrella anti-tariff group Americans for Free Trade is beseeching Trump to work towards tearing down these tariffs when he meets with Xi.

"Mr. President, we urge you to capitalize on your upcoming meeting with President Xi to reach an agreement that addresses China’s unfair trade practices and policies in order to remove the 2018 tariff increases …” the group said in a letter to Trump. “Millions of American farmers, business owners, companies, workers, and families are counting on you to make a deal."

But doing away with the tariffs imposed this year only brings the U.S. ag sector back to square one, and Trump administration officials tell Agri-Pulse they are looking to bring benefits far beyond just that to exporters who want greater access than ever before to Chinese importers.

At the top of the list is rice trade, say officials who asked not to be named because of the sensitive nature of the talks. Back in July, representatives of China’s State Market Regulatory Administration (SMRA) visited 10 rice milling operations in Texas, Arkansas, California and Louisiana. It was the penultimate step after 10 years of delays in China opening up to U.S. rice. The final step is the government simply signing off on the deal, but U.S. industry officials say they don’t expect that to happen without an end to the ongoing trade war.

China consumes about 144 million tons of rice every year and is the world’s largest rice producing and importing country.

The Chinese could also be importing a lot more American beef. President Trump continues to talk about China’s agreement last year to lift its ban on U.S. beef, but exports have been anemic because the country continues to prohibit any product from cattle treated with beta agonists and hormones that U.S. ranchers commonly use. 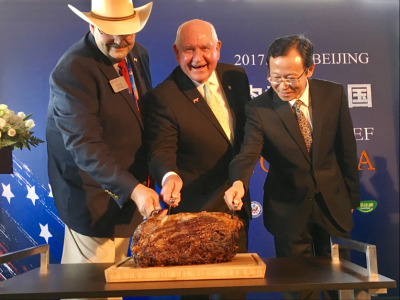 One administration official pointed out China refuses to buy most U.S. pet food, and that’s on the list of demanded changes in a comprehensive deal. Success there is estimated to result in an extra $1 billion of annual U.S. exports.

Something that would likely spur a lot more U.S. exports would be if China agreed to take down its tariffs on ethanol (up to 52 percent) and distillers grains (up to 66 percent).

Another main goal for U.S. negotiators is to wrap two major World Trade Organization disputes with China that accuse the country of maintaining artificially high domestic prices for corn, wheat and rice as well as failing to fulfill tariff rate quotas for those commodities as part of its deal to join the WTO.

Government and industry sources say the U.S. is sure to win those disputes, but negotiators are anxious to conclude them early in trade talks directly with China.

If China agreed to all of these demands from the U.S., the impact would be immense. Back in May, after two relatively successful rounds of negotiations between the two countries, Ag Secretary Sonny Perdue predicted China would increase its imports of U.S. agriculture commodities by about $25 billion, which would more than double the roughly $20 billion the country now buys annually.

None of this will be possible, though, if China does not relent on a few key non-agriculture issues. National Economic Council Director Larry Kudlow stressed to reporters Tuesday at the White House that there will be no chance of a deal with China if the country refuses to stop trying to appropriate U.S. intellectual property.

“If China will come to the table … with some new ideas and new attitudes and some new cooperation, as the president said, there’s a good possibility they can make a deal,” Kudlow said. “He’s open to it.”