Reorganization plans at the Departments of Interior and Energy did not get a warm reception at the Senate Energy and Natural Resources Committee last week, with senators particularly concerned about the administration’s proposal to eliminate the Advanced Research Projects Agency within the Department of Energy (ARPA-E) and sell off federal transmission assets.

They also questioned the need for reorganization at all.

“Both the Energy and Interior departments seem intent on fixing problems that don’t exist instead of solving the ones that do,” Ranking Democrat Maria Cantwell of Washington said, calling the administration’s proposal to sell off transmission assets for the Bonneville Power Administration and the Tennessee Valley Authority “downright dangerous.”

“These regional entities serve consumers in 33 states including rural Americans who would otherwise be left behind,” she said.

A reorganization plan released last month calls for the sale of transmission assets held by TVA and federal Power Marketing Administrations, including BPA, the Southwestern Power Administration and Western Area Power Administration (WAPA). Bernard L. McNamee II, executive director of the Office of Policy at the Energy Department, told the committee that "eliminating or reducing the federal government’s role in owning and operating transmission assets and increasing the private sector’s role would encourage a more efficient allocation of economic resources and mitigate unnecessary risk to taxpayers."

Cantwell, however, said the sale of those assets is a "non-starter" that she would be working with colleagues to stop it.

Sen. Tina Smith, D-Minn., called WAPA "a really important supply of cheap, reliable energy" for 48 municipalities, 15 cooperatives and three Native tribes in the western area of her state, and said she opposes selling off the assets. "I can't understand how the one-time cash flow is worth it," she said. 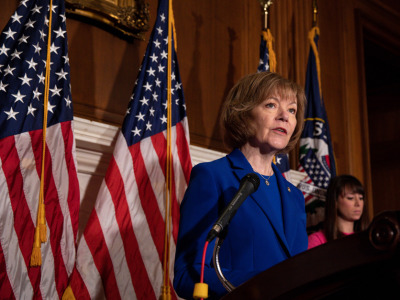 Cantwell also questioned the Interior reorganization plans, saying that Interior Secretary Ryan Zinke had "failed to offer explanations on why they want to make major changes."

“We have no understanding of how the Interior’s proposal could impact Tribal Nations. It seems to me that the secretary should complete tribal consultation before rather than after putting this plan together."

Chairman Lisa Murkowski, R-Alaska, was noncommittal on the proposals. She called it a “worthy endeavor” to look at how the departments are working, but also said there’s a great deal more work to be done. Like Cantwell and other members of the committee, she questioned the need to eliminate ARPA-E and fold some of its functions into a new Office of Energy Innovation.

“I’m a big supporter of (ARPA-E),” she said. “We’re going to continue supporting it through not only this committee here but through Appropriations.”

And Sen. Martin Heinrich, D-N.M., said of ARPA-E, “The first rule of government, when something works really well, don’t mess with it. It works. Let’s not wreck it.”

Smith also spoke up for ARPA-E, saying it funds “cutting-edge research” in her state, including projects that focus on biofuels production.

“We need to build our competitive advantage, not detract from it,” she said.

Sen. Angus King, I-Maine, wanted to see some numbers to back up the proposals. “I wish you would supply an analysis of what the savings would be from these various changes,” he told McNamee.

Susan Combs, a senior adviser at Interior who is awaiting confirmation as assistant secretary for policy, management and budge​t, presented Interior’s plans, including the absorption of the National Marine Fisheries Service by the Fish and Wildlife Service, putting responsibility for the Endangered Species Act under one roof. 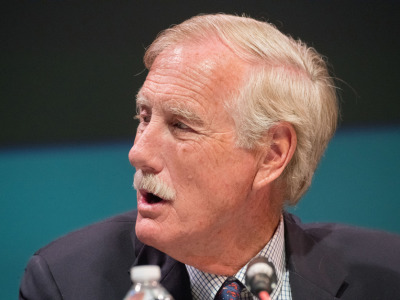 King said he was interested in the idea but wondered whether scientific expertise would be left behind in the Department of Commerce, NMFS’s current home.

Combs said the plan also would “consolidate and re-align the Army Corps of Engineers' Civil Works missions” by moving the Corps’ responsibilities for flood and storm damage reduction, aquatic ecosystem restoration, regulatory and other activities to Interior, “where we already conduct very similar activities.”

Other Corps functions related to its commercial navigation mission would move to the Department of Transportation, she said.

The Interior revamp seeks to establish “science-based, unified regional boundaries where decision-making related to priority functions will be made at the local level with consistent, informed, centralized coordination,” Combs said. It would take the 61 regional units for the department’s 10 bureaus and winnow them down to 12 regions. But, she assured the senators, the Bureau of Land Management, which manages grazing on its lands, would retain its state offices.