A sort of subdued glee wafted over the Ohio River’s banks near Olmsted, Ill., last week when the Army Corps of Engineers (ACE) and the towing and barge industry hosted a news media tour of the Corps’ costliest ever inland waterways project – the Olmsted Locks and Dam – as the mammoth new facilities pressed toward an October finish and use by shippers.

The two side-by-side Olmsted locks, each 1,200 feet long, will replace deteriorated Locks 52 and 53, both upriver from Olmsted and built nearly 90 years ago. The new facilities will play a strategic role in speeding up river commerce in much of the Ohio and Mississippi river systems, in good part because of their location at the base of the Ohio River navigation system, just below where the Tennessee River joins and just 17 miles before the Ohio flows into the Mississippi.

Despite the chronically failing old locks, the Corps says more tonnage moves through the Olmsted stretch of the river than any other place in America’s inland water navigation system. "Commerce from 28 states passes through this area (of the Ohio River),” Col. Antoinette Gant, commander of the ACE Louisville District, points out.

So ACE officials are clearly pleased to see the Olmsted finish line dead ahead. Lieutenant General Todd Semonite, ACE commander, declares: “This is a world-class project, ahead of schedule, below cost, and with innovation." 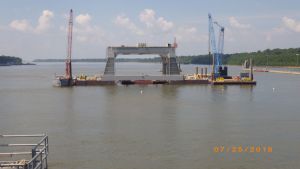 A big catamaran remains to finish the project

Semonite’s fiscal comment is correct, however, only in certain contexts, as Gant and others explain. Congress authorized the Olmsted locks nearly 30 years ago at $776 million. However, Army engineers decided in the 1990s on a risky, untried approach for installing the locks – called “in the wet” – whereby component sections of water control gates and wickets were built on the river's banks. Construction of the enormous structures followed and included a massive catamaran used to move components, up to 5,000 tons each, into the river. Over the years, the Olmsted projected costs swelled and, in 2012, they were estimated at $3.1 billion for a projected completion in 2026.

In 2014, however, Congress approved a revised and accelerated construction schedule, for a 2022 finish, with much higher shares of direct ACE spending: 85 percent in Corps spending and 15 percent from the Inland Waterways Trust Fund (IWTF), which is revenue from taxing towboat fuel. The usual split for such projects has been 50-50 for decades.

So, Gant says, the Corps can report, with its 2018 completion and a total cost of near $2.7 billion, that the finished project will actually be cheaper and quicker than expected four years ago.

However, Rick Calhoun, a spokesman for the National Grain and Feed Association and a former marine shipping expert for Cargill, noted how several other badly needed lock and dam replacements and upgrades have been kept waiting for years as the Olmsted project sucked up all available Corps and IWTF funding for such work.

So, in that context, he said, “I’m not going to stand here and call Olmsted a success, because it took 30 years and it cost way too much.”

Towing industry feelings about Olmsted completion, however, are largely sighs of relief. Locks 52 and 53 “have been a huge problem,” said John Eckstein, president of Marquette Transportation Co., a major towing firm, and Olmsted “is long, long overdue. The industry’s been dying to have it.”

Marty Hettel adds a few specifics to Eckstein’s comments. He is vice president of the American Commercial Barge Line, but also chairs the Inland Waterways Users Board and tracks inland waterways commerce. 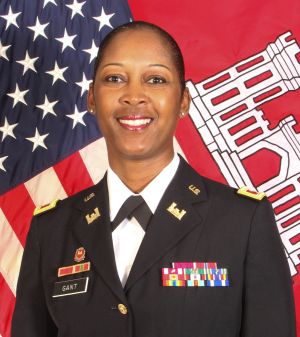 The Ohio River’s “locking season” – when dams and locks are needed to maintain river depth through fall and winter – begins in July. On July 24, the final season of the old Lock 52 operation had begun just 10 days earlier, and Hettel reported, “we’ve already had two mechanical failures in Lock 52,” resulting in 190 tows that have each been delayed by at least 20 hours.

Towboat operators alone, Hettel said, had taken losses estimated at $65 million since last November because of failures and resulting delays at Locks 52 and 53. Despite the Corps’ effort to maintain them, he said, the two old locks “have been in a failing state for the past two and a half years,” and “we can’t continue to sit out at Lock 52 with our shippers paying such expenses (for the delays).”

The sorry news about Locks 52 and 53, however, apparently makes the outlook for the Olmsted Locks’ performance that much better.

Reflecting what Corps officials are saying, Dan Mecklenborg, senior vice president of Ingram Barge Co., gives this succinct outlook: “While it currently takes an hour to lock through 52, if it’s working, and it takes another hour and a half to lock through 53, now, with Olmsted, it will be a reliable 30-minute process.”

“So you’ll save a lot of time on the lockages,” he said, “and you will get the kind of reliability that our customers in the international market and the agricultural community require.”

In addition, with the new Olmsted gates and wickets – the components essential for damming up the river to keep it high enough to support navigation in dry months – shippers will see much more successful management of the river’s flow in the entire downstream section of the Ohio and Tennessee rivers.

Waylon Humphrey, deputy chief of operations for the Corps’ Louisville District, explains that, while the old wickets at Locks 52 and 53 have often been unusable and require several days to lift into place, big cranes at Olmsted will be able to lift all 140 wickets into place in about 18 hours, raising the water quickly to the desired level. 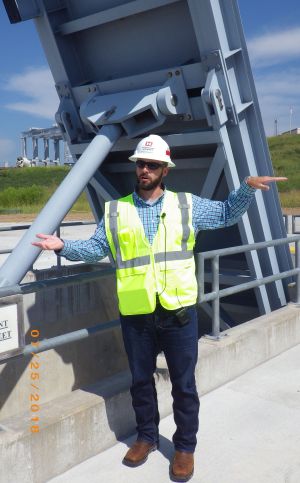 Also, importantly, the Olmsted project, despite its controversies and holdups, has spelled jobs for thousands of people for decades.

Kevin McLaughlin, project director for AECOM, the main Olmsted project contractor for several years, said workers on the site rose to more than 900 three years ago, including about 675 skilled craftsmen and about 100 ACE personnel.

Besides that, the jobs have been just as important for folks such as Ryan Miller, of Anna, Ill., a general laborer at the site “off and on for five years.” Miller said he’s earned most of his income there, helping with concrete pours, rigging materials that need to be moved by cranes, and doing job cleanup. "Wherever they tell me I need to go," he says.