Despite Congress’ chronic gridlock with the nation’s finances, funding for the kinds of water navigation infrastructure projects that American agribusiness wants to see is getting big doses of attention and dollars on Capitol Hill.

“We’re getting more money for maintenance and more money for construction,” said Jim Walker, director of navigation policy and legislation for the American Association of Port Authorities. “There are more projects underway than we’ve seen in a long time in terms of construction, and it’s bringing the money in the construction program back up to what it was . . . close to a decade ago,” he declared.

In Portland, Ore., Kristin Meira, executive director of the Pacific Northwest Waterways Association (PNWA), lauds lawmakers: “They are putting their money where their mouth is, making sure the Corps is adequately funded.”

West of Portland, the U.S. Army Corps of Engineers (USACE) is busy rebuilding long jetties into the Pacific that protect ships at the mouth of the Columbia River – the biggest exit point for U.S. wheat exports and a big one, too, for corn and soybean exports. The expected cost there is $11 million this fiscal year and $28 million in FY 2019.

“Whether you’re on the deep draft side (coastal harbors), or if you’re concerned about inland barging, or if you’re in a small coastal port, we have some pretty good news (about Corps projects)," Meira said. "I would say that Congress clearly sees the value of infrastructure projects."

Indeed, in recent weeks the Senate and House of Representatives have both advanced legislation authorizing increased spending and new projects plus separate legislation committing dollars for such work:

The USACE yearly budgets, which pay for studies and design, environmental mitigations, and flood control along with construction and replacement projects, have soared: from well under $5 billion before 2015 to $7.3 billion in the House’s bill for FY 2019 – up $451 million from this year’s total. Meanwhile, the Senate Appropriations Committee’s bill, approved in May, would fund the USACE at $6.9 billion, up $100 million from 2018.

That is despite persistent efforts by President Trump and other recent administrations to slash funding for Corps projects: Trump’s proposed cut in the Corps’ civil works budget for FY 2019 was huge: more than $2 billion below this year’s spending. Congress is pressing the White House to use much more of the revenues from the Harbor Maintenance Trust Fund (HMTF), raised by taxing shippers using the ports and waterways, for the Corps' waterways projects.

Cargo ships visiting any of the 1,067 U.S. commercial harbors pay a special cargo tax totaling about $1.6 billion a year into the HMTF to support the Corps’ costs of maintaining needed depth and other harbor structures. The HMTF swelled to $9.1 billion last year.

With lawmakers pressing the Corps to expand its work plan, its recently released 2018 execution plan for navigation projects expects to spend $1.5 billion. Also, the new spending bill asks the USACE to spend at least $1.5 billion for FY 2019 harbor operations and maintenance.

Walker explains the disparity between Congressional appropriators and the president’s budget writers (Office of Management and Budget) this way: “It is the OMB focus on the (budget) deficit versus Congress’ understanding of the critical need to invest in maritime infrastructure.”

In a like manner, Congress is also pressing OMB to accelerate the replacements and major rehabilitations of the 239 locks the Corps is charged with maintaining on the country’s 12,000 miles of inland navigable waterways. Barge operators pay a fuel tax of 29 cents per gallon into the Inland Waterways Trust Fund (IWTF), which finances a quarter to half of costs for new locks and major rehabilitations.

The barge fuel tax, recently increased from 20 cents a gallon, raises about $114 million a year now for the IWTF, said Debra Calhoun, senior vice president of the Waterways Council. Barge operators supported the increase, hoping to speed up replacement of aging locks, she said, and the trust fund has risen to $340 million.

So Calhoun and other waterways shipping advocates weren’t pleased when Trump proposed just $5 million and construction for only one inland waterway facility in FY 2019 – the completion of the $3 billion Olmsted locks and dam on the Ohio River in Illinois. He wanted to suspend all other inland waterway projects that lawmakers and the industry had listed as priority.

“It is puzzling,” Calhoun said. Trump “was out in Cincinnati last June talking about . . . locks and dams . . . (and) was a big cheerleader on the banks of the Ohio River, talking about the importance of (inland waterways).”

Instead, she said, he called for cutting the Corps’ budget by 22 percent, “and then proposed a new user fee on the inland waterways” as well. It was “extremely disappointing,” she said. Surprising, too, she said, because slashing the USACE water projects budget “really affects his political base of support: Those manufacturers, coal miners, steel producers, those farmers and ag shippers. Those sectors depend upon an efficient and reliable waterways transportation system.”

Meanwhile, the Senate Environment and Public Works Committee is pushing the Corps to go full steam ahead. “The Committee recommendation includes the full use of all estimated fiscal year 2019 annual revenues in the IWTF as well as the sufficient additional IWTF prior year revenues to ensure ongoing new construction projects may proceed."

Thus, the House and Senate bills provide funds for a long list of the Corps’ harbor and river projects, including lock replacements in the Heartland: Kentucky Lock in Kentucky, on the Monongahela River in Pennsylvania, and the LaGrange Lock on the Illinois River. 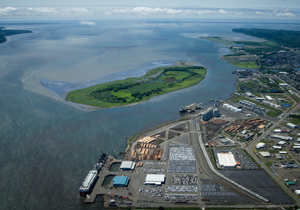 In the Pacific Northwest, the Corps’ fistful of projects at coastal ports and in the Columbia and Snake rivers systems includes deepening the channel in Grays Harbor, a Washington State ocean port south of Seattle, to 38 feet. Cargo volume through Grays Harbor has soared 400 percent in the past decade, in part owing to auto imports. But the port, with its rail connections to the Midwest and California, is becoming a significant agricultural export point – now the largest U.S. soymeal export route, the PNWA says.

Note that the FY 2019 water projects appropriations bill will face hurdles, including Democratic challenges in the Senate to House-passed policy changes that are unrelated to Corps projects: for example, a House provision to rescind the Obama administration’s Waters of the United States (WOTUS) clean water regulation. (That conflict might, however, be averted by the Environmental Protection Agency’s move to reform the WOTUS regulation.)