Some Republicans say the best thing Congress could do to help farmers withstand the turmoil in trade policy is to pass a new farm bill. But economists say the legislation is unlikely to offer much relief to farmers, especially soybean growers, even if commodity prices don’t recover from their current, tariff-induced slump.

If so, farmers will have to look beyond farm programs and crop insurance to manage their risk.

U.S. Trade Representative Bob Lighthizer last week warned that President Donald Trump’s trade war with China could drag on for years, this after Agriculture Secretary Sonny Perdue insisted the $12 billion aid package the administration will deliver this fall to help farmers deal with the trade war fallout won’t be repeated.

“In my mind I don’t see the China issue being resolved quickly,” said Ray Gaesser, a former president of the American Soybean Association who grows corn and soybeans near Corning, Iowa. “We need to be prepared to go at least more than this year without very much progress.”

Gaesser says he and other growers must start finding ways to cut their land and input costs.

“We’re going to be negotiating some rents down. We’re going to look at our fertilizer program and see if there is a place we can cut there,” he said.

Fearing a long-term slump, the National Farmers Union sent a letter to House and Senate leaders on Tuesday appealing them to provide more money to leaders of the House and Senate Agriculture committees to use in writing the final version of the new farm bill. 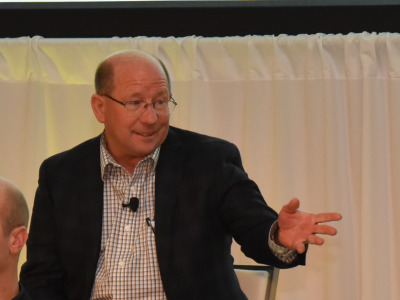 “Meaningful and substantive negotiations with our trading partners should have been exhausted before firing off punitive and disorderly tariffs. But that did not happen. Now it is imperative that Congress provide substantive and long-term relief to farmers,” the letter said.

NFU said the $12 billion aid package “does not provide a long-term solution to the long-term consequences of this trade war.”

Republican lawmakers such as Senate GOP Whip John Cornyn responded to the $12 billion aid package by saying that enacting a new farm bill and finalizing NAFTA were more important than the administration's one-off payment program.

Farmers will likely be allowed to switch between the two major farm programs, Agriculture Risk Coverage and PLC, whether there is a new farm bill this year or an extension the 2014 bill. And the Congressional Budget Office is projecting that soybean, corn and wheat growers now in ARC will shift en masse to PLC.

But because of the way PLC is structured, many farmers are unlikely to see much in the way of payments unless commodity prices drop even more sharply than they already have, economists say.

The PLC program only triggers payments when the average market price falls below the fixed reference price, which is $8.40 a bushel for soybeans, $3.70 for corn and $5.50 for wheat. Payments are calculated according to the farmers’ base acreage for each commodity. (The most widely used version of ARC provides payments only when farm revenue falls below the local county's average for the previous five years. Because of that, farmers now enrolled in ARC are expected to view PLC as offering better protection in coming years.)

In July, USDA sharply lowered its projected market price for this year’s soybean crop in the wake of China imposing a 25-percent retaliatory tariff on U.S. beans to a range of $8 to $10.50 a bushel. The midpoint of that range, $9.25 a bushel, is well above the $8.40 PLC reference price. Market prices would likely have to fall considerably more in 2019 to trigger payments to a farmer with soybean base who elects PLC.

Neither version of the farm bill that passed the House and Senate in June would raise the PLC reference prices set by the 2014 farm bill, although the House version contains an escalator clause that could raise some prices in the event of a severe, prolonged slump.

The cost of producing soybeans this year in the Midwest hovers around $10 a bushel, according to economists. A Purdue University economist estimated the break-even price for soybeans in Indiana this year at $10.05. In Illinois, the break-even price this year is about $9.81 per bushel, although that will be lower for producers with excellent yields, said Gary Schnitkey, a University of Illinois economist. In western Iowa, Gaesser said he'll need $9.50 to $10 a bushel to cover his costs.

Soybean farmers often have more of their base acres in other commodities, such as corn, than they do in beans, but a PLC payment for 2019 is still no sure thing, said Carl Zulauf, an economist at Ohio State University. The mid-point for USDA’s projected price range for the 2018 crop is $3.80, 10 cents above the PLC reference price.

Payments on wheat base would appear more likely unless wheat prices improve significantly for 2019. The 2018 projected price for wheat is $4.50 to $5.50, so the mid-point, $5, is 50 cents a bushel below the PLC reference price.

Zulauf said many farmers are going to look at PLC primarily as a safety net against much steeper price drops.

“One of the things the trade tiff has done is to increase the concern about what if things really went bad,” said Zulauf. “If this goes on, and if you get production increases in other places around the world, our exports could really struggle. That will put downside pressure on prices.”

For 2018, economists say soybean growers are unlikely to get much out of either crop insurance or ARC, the program in which most are enrolled, although farmers who forward-contracted a lot of their crop before the Chinese tariffs sent prices tumbling this summer may be OK, assuming they have good yields this fall.

According to an analysis by University of Illinois economists, the harvest price of soybeans would have to fall to $8.13 a bushel before a farmer who bought a revenue protection policy at the 80 percent coverage level would collect an indemnity, provided that the grower doesn’t have a poor yield, too.

"Crop insurance and ARC-County don’t cover shallow losses," said John Newton, an economist with the American Farm Bureau Federation. He was referring to the fact that crop insurance has a deductible of at least 15 percent - 85 percent coverage is the most that a producer can buy - and ARC will only provide payments when losses exceed 86 percent of the county's projected revenue.