Control of Congress may turn on farm state House districts

Trade and agriculture issues may play unusually prominent roles in congressional races this fall as Democrats look to seize control of the House and hang on to Senate seats they hold in farm states that President Donald Trump carried in 2016.

Of the top 100 agricultural House districts measured by the value of commodities they produce, Republicans represent the vast majority and are projected by ratings services to hold on to most of them.

But at least a half dozen Republican House seats in those farm districts are at risk heading into the fall campaign, including a pair in California’s Central Valley, two more in Iowa, and one each in Kansas and Illinois.

One Democratic-held farm-district seat is considered a toss-up: Minnesota Rep. Tim Walz, a longtime House Agriculture Committee member, is vacating his seat in Minnesota’s 1st District to run for governor.

Two other Democratic farm-district seats are rated as “likely Democratic” by the major rating services. One of those is Minnesota’s 7th District, which has been held since 1991 by the ranking Democrat on the House Agriculture Committee, Collin Peterson. The other seat, in Arizona's 1st District, is held by Democrat Tom O’Halleran. Trump carried both districts in 2016.

A big question heading into the fall in farm country is how much impact the anxiety over President Donald Trump’s trade policy will have on the races, and how enthusiastic rural Republicans will be about going to the polls.

In North Dakota, Sen. Heidi Heitkamp probably has a better shot at winning re-election because of the trade issue and the concern it has created for the state’s farm economy, says Joe Ericson, president of the North Dakota Soybean Growers Association. She is being challenged by Republican Congressman Kevin Cramer. 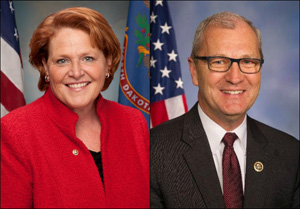 Kevin Cramer is running to unseat Heidi Heitkamp and represent North Dakota in the U.S. Senate.

“I think Cramer would have won fairly easily if the tariffs weren’t there. It’s going to be a lot closer if these tariffs are still around” at election time, said Ericson, referring to the retaliatory tariffs that China has imposed on U.S. soybeans.

The trade issue is accentuated by the fact that soybeans have in recent years supplanted wheat as North Dakota’s most important farm commodity. The state produced more than $2.1 billion in soybeans last year, compared with $1.4 billion worth of wheat.

With the trade concerns in mind, Deputy Agriculture Secretary Steve Censky went to North Dakota Aug. 23 to appear with Cramer along with Commerce Secretary Wilbur Ross.

Earlier in August, Heitkamp’s campaign started issuing “trade war roundups” of media reports on the trade issue, claiming Cramer “remains firmly in the dangerous trade war camp – refusing to stand up to the White House even when its policies are hurting folks here in North Dakota.” Cramer defends the president’s aggressive tariff strategy.

The 2014 farm bill is set to expire Sept. 30, but Ericson said the trade issue will likely overwhelm the farm bill in political importance this fall. “What good is a farm bill if we don’t have a place to get rid of our commodities?” he asked rhetorically.

In farm-district House races, it’s less clear how much impact the trade issue will have.

Some major California crops are being hit by the trade war, but Paul Wenger, a former president of the California Farm Bureau Federation who grows almonds and walnuts, says he doesn’t think the issue will have a major impact on races by two vulnerable Republicans in the Central Valley, Jeff Denham, whose 10th District includes Modesto, and David Valadao, whose 21st District sprawls across several counties south of Fresno. 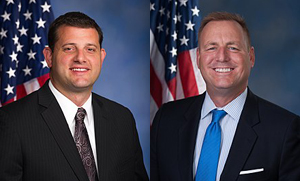 According to Wenger those races are going to be more of a referendum on Trump and how tightly Democrats can tie their GOP opponents to the president. Hillary Clinton carried both districts in 2016, 48.5 to 45.5 over Trump in the 10th and 55.2 percent to 39.7 percent in the 21st.

“The biggest thing here isn’t going to be the issues … it’s going to come down to Trump,” Wenger said. "I don’t think he’s going to be any help for them (Denham and Valadao).”

In Iowa, where two of the three GOP seats are up for grabs, the races could come down to whether rural Republicans go to the polls in large enough numbers to overcome an anti-Trump turnout in the cities.

Dennis Goldford, a political science professor at Drake University in Des Moines, says the major impact of the tariffs is still in the future, since farmers largely locked in higher prices on this year’s crop.

“There has been no evidence … of any significant shift among people in rural areas, rural Iowa, the ag sector, away from the Republicans,” Goldford said. He believes the Iowa races will come down to turnout, and notes that GOP voters tend to be older and more likely to vote in a mid-term election than Democrats. Based on that, he’s skeptical of a big Democratic turnout. “Is there a blue wave? I have my umbrella handy, but I’m not sure I’m going to need it.”

Tim Recker, a former president of the Iowa Corn Growers Association who farms in Blum’s district near Arlington, Iowa, doesn’t think the trade issue will hurt him. “I can’t believe that Republicans are going to blame him,” Recker said.

Recker said farmers “are optimistic and willing to give the president ample time to do a good deal.”

In other farm-district races that are considered up for grabs, Republican engineer and Army veteran Steve Watkins is running against former Kansas House Democratic Leader Paul Davis for the 2nd District seat being vacated by the retiring Republican Rep. Lynn Jenkins. The district includes a swath of rural counties in Kansas as well as Topeka and the university towns of Lawrence and Manhattan.

Trump carried the district in 2016, and Republicans now view the seat as one of their best pickup opportunities. Hagedorn grew up on a 1,000-acre farm near Truman, and his campaign bio brags that he “helped work the land, walk the bean fields, feed the hogs, maintain the property, and developed a firsthand understanding of farming and the business side of agriculture.”

Trump carried the district by 50 percent to 44 percent. The district includes Decatur, home of agribusiness giant Archer Daniels Midland, as well as some university towns.