There’s a noisy battle over water rights going on in the Golden State.

Late last month, a diverse group of over 1,000 Californians flooded the State Capitol to tell the State Water Resources Control Board (SWRCB) that their updates to the Bay-Delta Plan just won’t hold water.

Politicians from both sides of the aisle, farmers, citizens from San Francisco and the East Bay, as well as reps from agribusinesses are uniting in a nearly unprecedented effort to oppose proposed changes to state water regulations. The plan might benefit the environment, they say, but it would devastate communities and local economies.

“It’s been a long time since the farmers have organized on the Capitol steps and that’s what today was,” said Jamie Johansson, president of the California Farm Bureau Federation. “Buses came from all over the state, under once voice, ‘Stop the Water Grab,’ and that’s what we have to do.”

Heated sentiments have boiled over into public debate since a final draft was submitted to the Water Board for consideration a few months ago. Environmental proposals have been coming out since 2012, but prior to that the last significant update to the plan was in 1995.

This plan is not to be confused with the California WaterFix Project, which would construct two massive tunnels rerouting water from the Sacramento River to state and federal pumping facilities near Tracy, Calif., or the Sustainable Groundwater Management Act (SGMA), which authorizes the water board to intervene where groundwater users and local agencies are unable or unwilling to sustainably manage their groundwater.

The main changes to the plan are updates to river flow objectives for protection of fish and wildlife, meaning more water staying in the streams and less going to agriculture, drinking water and communities.

“The reason for updating this element for the lower San Joaquin flow objective is because fish and wildlife have been doing extremely poorly in particular in the San Joaquin River and its tributaries, the Merced, Tuolumne and Stanislaus rivers,” said Les Grober, the Water’s Board’s environmental program manager, in a phone interview.  “So, in a nutshell, the proposal is to increase in-stream flows in the lower San Joaquin River to provide that reasonable protection for fish and wildlife.”

“This is far from taking all of the water and diverting it towards in-stream flows and fish and wildlife,” he said. “This is taking a percentage of the water that goes to agriculture and other uses and keeping it in-stream, which is also a human interest. We have laws and people that are very interested in a good environment and protection of fish resources and protection of fisheries, which are also used commercially.”

Johansson, with the state Farm Bureau, noted that right now, the plan affects the San Joaquin and its tributaries, but says the Water Board has signaled that they won’t stop there. The fates of the Sacramento and the Feather rivers in the Northern California might be up next.

“They just carry on business as usual, which is putting California farmers out of business,” he said on the Capitol steps. “This rally is about California retaining a water rights system that really has grown the seventh-largest ag economy in the world.”

He added that the plan would negatively affect available water in the East Bay Area and San Francisco, “so they have a stake in this as well.”

An opinion piece in the Sacramento Bee in July by Water Board Chair Felicia Marcus argued on behalf of species that are being affected by water shortages.

“Yes, leaving more water to flow into the Delta from both the San Joaquin and Sacramento watersheds will be challenging for water users, which is why the proposal sends more water but still less than what is optimal for fish and wildlife. Water users can adapt – by switching crops, becoming more efficient and storing more water in wet times. In contrast, species pushed to the brink of extinction have few options.”

Politicians at the rally pledged to stop the proposal.

“This rally is a message to (Governor) Jerry Brown that we will not stop fighting for our water rights,” said U.S. Rep, Jeff Denham, a Republican who represents an area of the northern San Joaquin Valley, promising a “fight for the last drop.”

“If this were to pass, it will leave us with no water,” Denham said. “By (the Water Resources Control Board’s) own numbers, one out of every four years our reservoirs will be empty.”

Democratic State Assemblyman Adam Gray said if the plan goes through, “we’re talking about between a billion and 2 billion dollars in lost revenue, thousands of jobs, and that’s just in my community.”

John Duarte, president of Duarte Nursery, near Modesto, attended the rally along with over 200 of his employees. The business supplies orchard trees and grape vines to farms all over the Western U.S. and employs hundreds of people in the Central Valley who are worried about the safety of their drinking water if the plan is approved.

Another silent casualty of less irrigation water are the jobs that agriculture touches. 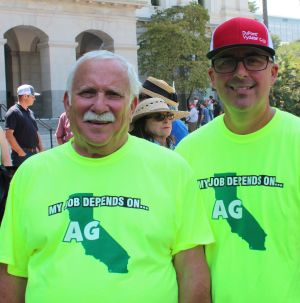 The co-founders of My Job Depends on Ag, Steve Malanca and Erik Wilson, were also at the rally and spoke about how all the jobs that don’t get factored into agriculture will be affected.

“Jobs in ag will obviously hurt, but it’s also the jobs that people don’t consider to be ag-related jobs, and that’s what I think the general public needs to be concerned about,” Wilson said. “It’s the guy who owns a franchise Subway place in a small community, or a tire shop, or jobs like that. Beauty salons and those kinds of things are a trickle-down effect when agriculture suffers. It’s not just the farmer or the parts stores and the tractor dealerships, it’s a lot of things.”

Both Malanca and Wilson work in California’s ag industry in Fresno County. My Job Depends on Ag is a project they created through a Facebook group they formed in 2016 that now has over 83,000 international members.

According to a recent press release from the SWRCB, after hearing testimony from over 150 individuals and groups, it has decided to postpone finalizing the Bay-Delta Plan until Nov. 7, the day after Election Day.

The California Farm Bureau Federation is working with state Sen. Cathleen Galgiani, D-Stockton, on Senate Bill (SB 579) that would prevent the board from enacting its proposed flow requirements and require it to look at more efficient uses of water to make a difference for California’s environment, communities and agriculture.

(You can find answers to some frequently asked questions about the Bay-Delta Plan by clicking here.)