Home » CEOs are on the move and salary levels are, too
News Farm Hands Energy Food

CEOs are on the move and salary levels are, too

CEO salaries at major nonprofit trade organizations in the agriculture, food and energy space, for the most part, continue to trend upward.

But experts say a series of retirements and departures by industry veterans may dip pay scales downward, as newer executives step in.

“We’ve been predicting that wave for a while, as a lot have, but now it’s happening, and we’re not sure why,” says Robert Skelton, chief administrative officer with the American Society for Association Executives (ASAE) about the exact reason for the retirements.

For the farm, food and energy organizations that Agri-Pulse has been watching for over three decades, the reasons for a change at the top are perfectly clear for many CEOs. Over the last two years, several long-time “farmhands” like Connie Tipton, Jay Vroom, Alan Tracy, Tom Buis, Ken Auer, John Becherer, and Dwight Armstrong decided to retire after devoting decades of industry leadership.

For others, retirements came as associations themselves were undergoing major structural changes. Pam Bailey, who served as President and CEO of the Grocery Manufacturers Association for almost a decade, stepped down in February of this year, noting that: “As GMA’s board continues to engage in the reinvention process to build the association of the future to meet the consumer needs of the future, it is best that they do so in concert with their leader of the future." Bailey was consistently at or near the top compensation levels in the Agri-Pulse CEO compensation survey, and the top female "bread winner," earning about $2.5 million in compensation last year.

“What does that have to do to compensation? Well, what you might see is someone leaving after a very long tenure, whose salary has grown significantly over many years. That may give an organization the chance to cut compensation as they bring in a younger person who doesn’t have quite the years in. So, you might see salaries on average decline and it might take time to ramp back up," says Skelton.

However, those job changes could also mean big increases in compensation for those filling the “shoes” of industry veterans. Case in point: Vroom, CEO of CropLife America, is stepping down after almost 30 years – creating a vacancy for one of the most highly sought-after jobs in Washington, D.C. In the non-profit’s tax filing on Form 990, his total compensation package for the year ending 2017 was just over $980,000. 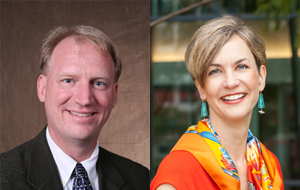 Both Chris Novak, who had been CEO of the National Corn Growers Association,

and Julie Anna Potts, executive vice president and treasurer for the American

His replacement: Chris Novak, CEO of the National Corn Growers Association, who earned slightly over $490,000 in total compensation that same year at the St. Louis-based commodity organization. But Novak’s new compensation package won’t be known to the public until the organization reports a full year of tax records, as required by federal law.

Our annual “CEO Compensation Report," based on our review of 990 Tax Forms filed on Guidestar.org or provided directly to Agri-Pulse by the non-profit organization or USDA, aims to keep you current on what CEOs who work for national farm, food and energy organizations are earning. Our goal – as we expand the list every year – is to provide substantial comparisons so that boards of directors will be better informed about the marketplace before they hire. And so other potential job candidates can know how much their competitors make.

Ag, food and rural organization CEOs are an exclusive – and sometimes well-paid – group
Replant? File for Prevented Planting? The options are complicated
Montana beef checkoff under fire – what are the national implications?

“I always look at the Agri-Pulse compensation report before I interview for my next job,” noted one source who asked not to be identified.

Finding and explaining the most recent CEO compensation numbers is not always easy. In many cases, organizations file these reports a year or more later than the actual calendar year in which they are operating. If that’s the case, Agri-Pulse personally contacts the organization to see if they have filed more recent data. In many cases, especially when fiscal and calendar years differ, the 990 forms lag.

In some cases, a CEO is paid with funds from more than one organization. Tom Suber, the CEO of the U.S. Dairy Export Council, was also paid by Dairy Management Inc. as executive vice president until he retired at the end of 2016. His total compensation was slightly over $1.9 million in 2015. He was replaced by Tom Vilsack in 2017, but the former Agriculture Secretary’s new salary has not yet been made publicly available. 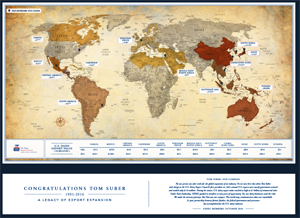 Tom Suber was presented with this plaque upon his retirement in 2017,

celebrating "a legacy of export expansion" for the U.S. dairy industry.

ASAE’s Skelton says that not all CEO packages are headed upward. Another factor that may be putting a brake on compensation, Skelton says, is the tax reform law that took effect in December. One provision in the new law imposes for the first time a 21 percent excise tax, paid by the non-profit, on compensation to top executives in excess of $1 million.

“That’s going to come as a shock to a lot of people,” Skelton says, adding that Congress apparently meant to fix the provision but “never got around to it.”