Home » Perdue: TPP could be the key to confronting China
News Politics Trade

Perdue: TPP could be the key to confronting China

Agriculture Secretary Sonny Perdue has an alternate plan to end the U.S. trade war with China and the Trans-Pacific Partnership is key to its success, the cabinet member and former Georgia governor told Agri-Pulse in an interview.

Perdue stands firmly behind President Donald Trump’s trade battles with China – the fight to get the communist country to stop appropriating U.S. intellectual property and flooding the international market with cheap steel and aluminum – but from a farm perspective, he says he knows they need to be resolved.

“We don’t like it,” Perdue said of the trade war that is depressing already low prices for soybeans, pork, dairy and other commodities that have seen exports cut in the wake of China’s retaliatory tariffs.

That, he said, was his message to Han Jun, the vice minister for China’s Ministry of Agriculture and Rural Development, who visited USDA last week for informal discussions.

“I don’t know how well it translated, but I told him, ‘You know, we have a saying here in the United States: When two elephants fight, the grass suffers.’ And so our producers (and) consumers suffer when we fight at the top and it’s in our best interest to resolve those kinds of things.”

In the ideal scenario, the U.S. and China sit back down at the negotiating table and settle their differences, but that doesn’t look like it will be possible any time soon. Senior administration officials told reporters Monday evening there is still no sign that the Chinese are willing to “seriously engage” over U.S. demands, and that was just hours before Trump announced he would hit China with new tariffs on $200 billion worth of its exports.

In a further sign that China’s not yet willing to concede, the country announced via the state-run news agency Xinhua on Tuesday that it will retaliate with new or increased tariffs on $60 billion worth of U.S. products.

Meanwhile, the South China Morning Post is reporting that China likely will scrap plans to send a trade delegation to the U.S. because of the new $200 billion in tariffs that are slated to go into effect Monday, Sept. 24. 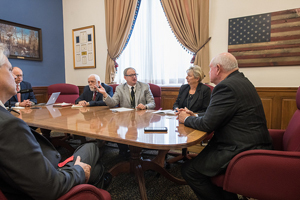 By some accounts – including Perdue’s – China is showing signs of cracking under the U.S. tariffs. On Monday, the U.S. will be imposing tariffs on $250 billion worth of Chinese products – roughly half of what Americans import. And if that’s not enough, Trump is threatening to more than double that, taxing just about everything China sells to the U.S.

“They are very anxious to do something,” Perdue said. “I think they are frankly more concerned about the long-term effect on their economy than we are.”

But if China holds fast and an end to the war is nowhere in sight, the U.S. will need the kind of help that it can only get in the Pacific Rim trade pact that Trump pulled out of during his first month in office.

“I’m hoping we can get that done,” Perdue said about a deal with China. “If we are, that’s great. If we’re not, my goal is to suggest to (President Trump), let’s gang up. Let’s go back into TPP Plus and put this group of 12 together as a front against China if China won’t come to the table … I think, frankly, those 11 other countries will welcome that. I don’t know that the president is totally adverse to that. While he prefers bilateral (trade pacts), I think he just wants a better agreement than was negotiated and we would be open to support that.”

The remaining member countries of the TPP, which is now officially known as the Comprehensive and Progressive Trans-Pacific Partnership (CPTPP), have all agreed to implement the pact without the U.S. Japan has rebuffed U.S. proposals for a bilateral free trade agreement and more than once asked the U.S. to rejoin the multilateral deal.

In April, Trump reacted to growing demands from Republican lawmakers to reconsider U.S. membership in the TPP by ordering U.S. Trade Representative Robert Lighthizer to begin work on a potential U.S. re-entry into the trade pact that includes Japan, Mexico, Canada, Australia, Vietnam, Brunei, Chile, New Zealand, Peru, Singapore and Malaysia. That didn’t last long, though, and Trump publicly walked back the project in less than a week.

But lawmakers are still adamant that the U.S. needs to be part of the TPP, both to benefit from increased trade from the tariff reductions that the Obama administration negotiated in the pact as well as to counteract China’s growing influence and leadership in the Pacific Rim.

After Trump pulled the U.S. out of the TPP, China picked up the pace in negotiating its own multilateral trade deal, the Regional Comprehensive Economic Partnership (RCEP).

“As we step back and look at the big picture, I would highly encourage that we rethink re-engaging on TPP to serve as a counterweight to China’s growing influence, not only in the region, but around the world,” Sen. Steve Daines, R-Mont., said at a Senate Agriculture hearing last week.

Sen. John Thune, R-S.D., offered a similar sentiment at the hearing: “It seems that if you want to send a message to China, the best way to do that is to do business with their competitors.”

Perdue’s TPP plan may be a long shot despite support on Capitol Hill, but both he and Trump are still confident that the U.S. and China can work out their differences.

Perdue also responded to several other questions during our interview, including:

Europe, Canada will be tough on trade but not impossible. Perdue said he’s confident that the Trump administration will succeed in getting EU negotiators to the table for an overall trade agreement that tears down a bevy of European non-tariff trade barriers.

The path to get there, Perdue said, started with Mexico. Like pushing on a row of dominoes, the USDA chief said, U.S. negotiators started the chain reaction with Mexico and that will help push over Canada and then the EU.

“The domino effect is Mexico and Canada and then … the EU,” he said. “They’ve been the most intransigent ones over the willingness to talk about agriculture.”

With the U.S.-Mexico agreement complete, Perdue said he is optimistic about the next domino: Canada. Those talks are ongoing, but Canadian resistance to U.S. demands that Canada end its Class 7 dairy pricing program remains a stumbling block.

“I think Canada understands that its Class 7 is not in keeping with what we believe was the spirit of NAFTA and I think we can get that resolved,” Perdue said.

More trade assistance coming? Farmers shouldn’t expect a second year of trade assistance payments next year, unless Congress decides to do a package on its own. Perdue says farmers need to make their planting decisions based on market signals, not the expectation of more aid from USDA. He noted that futures prices are suggesting farmers should plant fewer acres of soybeans.

“That’s what farmers have done forever – look at what the forecasts are,” Perdue said.

He said the payments this year were justified because farmers couldn’t anticipate the market impact of the trade dispute when they planted their crops this spring. “I don’t think it’s in anyone’s best interest to send a signal that, other than the farm safety net we have out there and crop insurance, this is anything more than a 2018 kind of issue.”

He left the door open for Congress to step in - if the farm economic picture worsens. “If we move further down with working capital, with people going out of business, I think Congress will be motivated to look at some sort of package.” He said the administration is not forecasting that possibility at this time. Perdue made clear that, “It’s not the role to keep everyone in business. It’s to provide a general safety net and allow people to do what they do best in agriculture.”

Changes possible in MFP payments? USDA has already started making the first half of market facilitation payments (MFP), based on certain requirements and dates. Perdue said some of those might changes in the second tranche of trade assistance payments, including the Aug. 1 ownership date established for pork producers. “We heard of some people who cleared out their houses in early July and I think we need to be respectful and consider that in maybe the second tranche. We are not smart enough to say we just nailed it perfectly the first time.”

SNAP waiver rules need to be tightened. Agriculture Secretary Sonny Perdue says he would recommend that President Trump sign a new farm bill if it makes it harder for states to get waivers from the work rules for food stamp recipients. That wouldn’t go anywhere near as far as the House-passed farm bill, which would significantly expand the number of people subject to Supplemental Nutrition Assistance Program (SNAP) work requirements.  But Perdue says that tightening the SNAP waiver rules should be enough to address the president’s concerns. Perdue declined to say whether he would recommend a veto if the farm bill negotiators fail to agree on changing the waiver rules.

“It’s really a matter of enforcing the integrity the system as it was designed. If we are given that statutory authority (to limit waivers), I would recommend to the president that really fulfills his request for work requirements.”

Perdue, who was Georgia’s governor for 8 years, said he understood how governors want to draw down as many federal dollars to their states as they can and “I don’t think less of them for doing that.” But still, he says the current waivers have been abused. “When you are looking at over 10 percent unemployment, we need to be compassionate and generous.” But when you have “under four percent unemployment and virtually the whole state signing up for waivers, that’s an abuse of the system that needs to stop.”

To watch video highlights of our interview with Sec. Perdue, click here.