Increased competition for limited water supplies and higher costs are forcing California farmers to use new technology to improve their irrigation systems and water management practices.

Facing urban growth, environmental concerns, wildfires and other pressures on water supplies, USDA warns “the efficiency of irrigation systems is particularly important in the arid Western states where water demand for agriculture is greatest, and where increases in competing demands and climate change impacts are expected to affect future water supplies for agriculture.”

Along with warning about increasing competition for water, USDA has this good news for growers: “Efficient irrigation systems and water management practices can help maintain farm profitability in an era of increasingly limited and more costly water supplies.”

This mixed outlook applies in spades to the 7.9 million acres of irrigated farmland in California where Gov. Jerry Brown signed The 100 Percent Clean Energy Act (SB 100) into law in September.

The new law mandates electric utilities generate 60 percent of their power from renewable sources by 2030. That’s up from the state’s previous 50 percent mandate. The law phasing out fossil fuels also mandates that by 2045, 100 percent of the state’s electricity come from solar, wind, hydropower, and other clean sources that might or might not include nuclear power.

The California Farm Bureau Federation (CFBF) joined forces with electric utilities, oil companies and labor unions to fight SB 100 – and lost. With the new renewable energy mandates now law, CFBF instead is working with the utilities and research labs including Fresno State University’s Center for Irrigation Technology and the PG&E (Pacific Gas and Electric) Advanced Pumping Efficiency Program to help farmers upgrade their irrigation pumps and practices to reduce energy costs and water use while boosting crop yields.

Concerns persist that the renewable energy mandate will drive electricity costs up sharply, forcing some farmers out of business. But CFBF and other stakeholders are accepting that California agrees with former Gov. Arnold Schwarzenegger, a staunch Republican who famously supported SB 100 with his tweet that “We are Californians. We don’t wait. We build the future economy here.”

Ryan Jacobsen, CEO/executive director of the Fresno County Farm Bureau, tells Agri-Pulse that farmers can’t afford to wait – not when the new renewable energy mandates are “likely to substantially increase the cost of electricity.”

The problem with SB 100, Jacobsen explains, is the law “provides a mandate without any direction on how we are going to get there. That uncertainty makes it very concerning when it comes to trying to contain your costs on the farm.”

Jacobsen is encouraged, however, by how quickly research labs and start-ups are developing new technologies that he predicts will help both California and other states facing increased water constraints. “There is a truly renewed emphasis on agriculture and what Silicon Valley and the rest of the tech world can do to solve our problems,” he says.

“We happen to be in the San Joaquin Valley,” Jacobsen adds, “a great site for solar panels, so you’ve seen farms increasing their adoption of solar, creating their own sources of energy.” 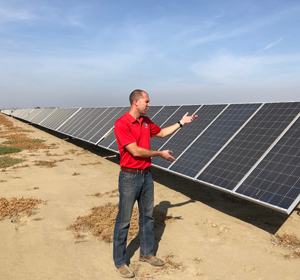 Woolf Farming Resource Manager Daniel Hartwig next to some of the solar panels for the California ranch's 32 irrigation pumps.

Daniel Hartwig, resource manager for Woolf Farming, says the family-owned operation’s 20,000-acre main ranch in Huron, Calif., invested in solar to power the ranch’s 32 irrigation pumps ranging from 350 to 600 horsepower. But he’s reconsidering that investment now that the utilities’ mandated shift to renewable energy means peak electricity prices will change next year from the current noon-to-6 p.m. period to 4 p.m.-to-9 p.m., “after the sun’s gone down.”

Like the state’s research labs, Hartwig says he’s “evaluating whether new battery technology” will extend his solar panels’ value. He’s also working closely with Fresno State and other researchers “to improve our pumping efficiencies.” His advice to other growers: “Continue to investigate and invest in new technologies. We’ve really got to see what’s out there to improve our efficiencies.” 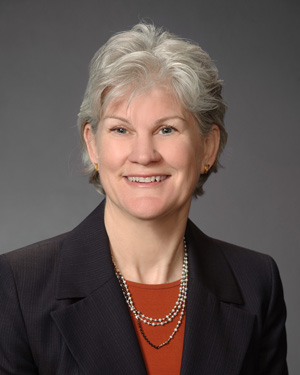 Karen Mills, senior attorney for energy policy with the California Farm Bureau Federation, says CFBF is responding to California’s new renewable mandates by focusing on educational outreach to help farmers “understand how the new pricing works” and how to incorporate new technology to become “even more efficient than they already are.”

“Into the future, 10, 15 years from now,” Mills says, “it’s storage, whether batteries or some other new technology.”  She explains storage “may make it feasible for farmers to have self-generation” to reduce their electricity costs.

As California expands clean energy production to meet the new mandates, Mills also is helping utilities and policymakers understand the need for new regulations that allow farmers – and require utilities – to site new solar arrays on the least productive farmland, not the most productive, “to minimize the impacts to our (CFBF) members as much as possible.”

But as long as California’s pathway to 100 percent clean energy remains vague, Mills warns, farmers will remain “wary about investing too much” in new technologies when the rules may change again.