Vetter: No 'unified opinion' on trade in Trump administration

Darci Vetter, general manager of public affairs at Edelman in Washington, D.C., and the top ag trade negotiator at the Office of the U.S. Trade Representative from 2014-2017, told members of the Agricultural Retailers Association meeting in Florida about the ups and downs of the U.S. relationship with China this year.

President Donald Trump’s advisers do not share a “unified opinion” about what the United States really wants out of China, she said.

“Is the trade war about trade with China or about containing China on the world stage?” she asked, citing a speech last month by Vice President Mike Pence that urged U.S. businesses to abandon China.

After her speech, Vetter told Agri-Pulse, “I think it’s not apparent what exactly the goal is or what success would be defined as in terms of China’s behavior, or what any deal with China might look like.”

She noted China itself has said publicly it wants to know what the United States’ goals are, and which officials it should be talking to. Looking ahead to Trump’s meeting with Chinese President Xi Jinping at the upcoming G20 summit in Argentina, Vetter said, “I assume they will announce some sort of agreement but it likely will be an agreement on talking further.” Trump himself has said it’s unlikely he would act to pull back 25 percent tariffs on thousands of Chinese goods due to take effect in January.

“A clear process to put this relationship back in the box would be welcome, but I’m not sure they want that,” she said, speaking of Trump’s advisers. Instead, they may feel that “raising tensions even more” is what gives them leverage in negotiations. 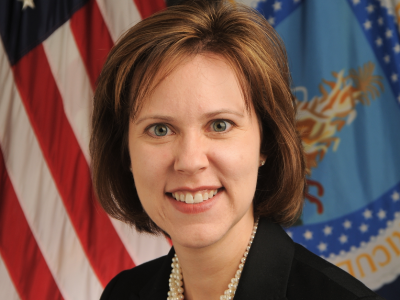 Vetter helped negotiate the Trans-Pacific Partnership during her time at USTR.

She acknowledged “a longstanding set of concerns we’ve had with copyright infringement, with intellectual property, with forced technology transfer” and said, “I share the frustration of this administration and I share the desire to punch (China) in the nose, but I’m not sure that punch-in-the-nose plan will get the result we seek.”

The prospects of other trade agreements remain uncertain. Vetter said the United Kingdom cannot negotiate anything until its divorce with the European Union is complete. And she said she expected European Commission President Jean-Claude Juncker and Trump to have some “rocky conversations” in 2019 about the scope of future negotiations. The two issued a statement in July saying they intended to work towards “zero tariffs, zero non-tariff barriers, and zero subsidies on non-auto industrial goods.” Juncker also said Europe would buy more soybeans, but it’s not clear how that would be arranged.

As for a bilateral trade agreement with Japan, Vetter told Agri-Pulse, “The good news is we have a starting point; we have a very recent, bilateral agreement that we negotiated with them through TPP. The question is, what are the parameters going to be of this new agreement?”

In a September statement issued by Japanese Prime Minister Shinzo Abe and Trump, the two countries agreed to “respect positions of the other government” on automobiles and agriculture. “The question is how complicated it is for them to meet in the middle. The ball is partly in the U.S.’s court on how it intends to treat autos (and) steel and aluminum.”

Vetter said she has been surprised there has not been more talk about the impact of tariffs on the ag sector and offered some advice to the retailers in attendance, telling them they can highlight the importance of trade to their businesses.

“Your employees can be your best advocates,” she said. “They can tell their very personal stories.”