The government shutdown that is now in its second week has short-circuited the USDA’s implementation of the 2018 farm bill just as it was getting launched.

In an interview with Agri-Pulse, Deputy Agriculture Secretary Steve Censky said the personnel needed to begin developing guidelines and rules for implementing the bill's required changes are barred by law from continuing such work when the department’s funding is expired.

USDA was among a series of departments and agencies, including the Interior Department, EPA and FDA, operating under a continuing resolution that expired Dec. 21, the day after President Donald Trump signed the farm bill into law. Trump and congressional Democrats remain at odds over his demand for funding the U.S.-Mexico border wall.

House Democrats will force a vote Thursday on an omnibus spending bill that would fund USDA, Interior and other departments that are currently shut down because they don't have FY19 spending bills enacted. The Democratic legislation is based on the FY19 spending bills that passed the Senate in 2018, but Senate Republicans will likely oppose the measure since it won't meet Trump's demands for border wall funding. That means the budget dispute and USDA shutdown could continue into next week. 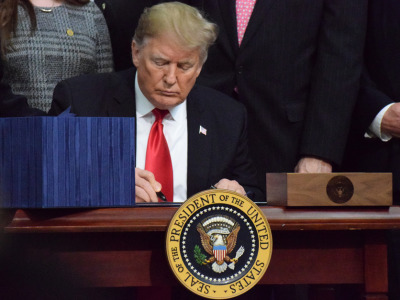 Although many officials and employees planned to be on vacation over the Christmas holidays, others were still planning to start studying the details of the bill, but they legally could not because of the shutdown.

Censky said there was little agencies could do to prepare for implementation until lawmakers released the final text of the bill in December. But, he said, “We are committed to moving just as fast as we can to implement” the legislation.

Censky said he couldn’t provide a timeline for implementation, including target dates for allowing farmers to choose between the two major commodity programs, Agriculture Risk Coverage and Price Loss Coverage, and for milk producers to sign up for the new Dairy Margin Coverage program, an overhauled and renamed version of the Margin Protection Program.

The new law allows farmers to switch between ARC and PLC starting with the 2019 crop year – most growers are expected to pick PLC – and the new coverage for dairy producers is effective Jan. 1, even though the signup may be delayed for several months.

The dairy program triggers payments to producers when the margin between feed costs and milk prices falls below the coverage level chosen by a producer. Under the new program, producers will be allowed to buy coverage at margins of as much as $9.50 per hundredweight, compared to a top level of $8 under the existing program.

By the time the DMC enrollment begins, dairy producers will know what their payments will be for the first few months of the new program, Censky said.

Censky said that agencies will be expected to meet the schedules they set for themselves in implementing their portions of the new law.

“We’ve cautioned and admonished our staff that we want it to be done just as quickly as possible, but once they establish those dates we intend to hold them to them as well,” he said.

An executive order issued by Trump shortly after taking office imposes restrictions on new regulations issued by USDA and other departments, but Censky said he didn't expect that to be a problem. The executive order sets a budget for each department in terms of the cost of regulations it issues, but USDA should have a sufficient amount of money banked in part because of the new proposed rule restricting waivers from work requirements for able-bodied adults who participate in the Supplemental Nutrition Assistance Program. The rule would save an estimated $15 billion over 10 years.