Reports out of China where U.S. and Chinese negotiators — including USDA officials — have been working for the past three days to end the ongoing trade war are so far positive and that’s a good sign for the U.S. chicken industry.

The talks in Beijing were initially planned to take place Monday and Tuesday, but were extended to go through Wednesday.

Until 2015, the U.S. had sold millions of dollars’ worth of chicken annually — often parts of the bird that are less popular with American consumers — to China, a market that has been shut to U.S. exporters for years. U.S. government and industry sources are hoping the current trade talks lead to a resolution.

The third day of the latest round of bilateral talks wrapped up Wednesday in Beijing, where Undersecretary for Trade and Foreign Agricultural Affairs Ted McKinney and U.S. Trade Representative Chief Agricultural Negotiator Gregg Doud are representing the interests of the U.S. farm sector. 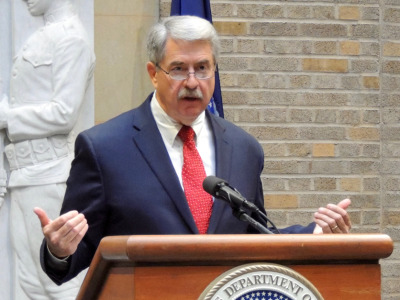 U.S. officials are under a lot of pressure as the U.S. ag sector continues to feel the pain of Chinese retaliatory tariffs on U.S. grain, oilseeds, meat, fruits, vegetables and tree nuts.

The Chinese ban has long outlasted any trace of bird flu outbreaks, but it may prove to be an effective bargaining chip for the Chinese during talks this week in Beijing.

As to Chinese demand for U.S. chicken, it’s stronger than ever, Sumner said. He's holding an annual reception in China next week and expects at least 700 representatives of Chinese importing companies to attend.

“They have not given up on us,” he said. “We haven’t given up either. We’re hopeful and optimistic it will happen.”

Another factor that could push China to lift its ban on U.S. chicken is China’s desire to see the U.S. finally approve its exports of raw chicken to the U.S.

It’s been about 15 years since China first requested USDA approval to sell its chicken here. Opposition from Capitol Hill and complicated procedures for proving that Chinese food safety measures are equivalent to those in the U.S. have caused long delays, but that process is essentially over. The USDA could decide any day now to publish a final rule that allows in Chinese chicken.

Early in 2018, the USDA was predicting it would finish by September a final rule to allow China to ship raw chicken to the U.S. That prediction was pushed back until December and is now in limbo.

A U.S. government official says the USDA just isn’t through with the paperwork to complete the process of lifting its ban on Chinese chicken.

Food safety issues are not supposed to be transactional, but industry and government officials say the current trade war is impacting what should be solely food safety decisions.

“I think that the whole issue of the (food safety) equivalency is caught up in the big picture of negotiations with China,” said Tony Corbo, senior food policy analyst for Food & Water Watch.

When any country wants to export meat to the U.S., that country has to prove to the USDA and its Food Safety and Inspection Service that the way it insures safety of the product is equivalent to the stringent procedures in the U.S., where government inspectors are stationed in every federally approved slaughter and processing plant.

The FSIS has essentially made up its mind that China and a few slaughter facilities there are in fact eligible to export to the U.S. While that may be good news for U.S. industry hoping that the finding will reduce tensions between the countries, groups like the Consumer Federation of America are aghast and are urging the FSIS to change course.

“Despite the agency’s claims to the contrary, Chinese insistence on a quid pro quo, demanding access to the United States for Chinese chicken in exchange for reopening its markets to U.S. beef imports, has exerted an inappropriate influence on this rulemaking process,” the CFA said in comments submitted to FSIS. “China continues to experience high-profile food safety problems, and the country’s food safety system is in a state of flux.”

A common criticism from groups like CFA and Food & Water Watch is FSIS only approved the food safety system in two of China’s 23 provinces — Shandong and Anhui.

The approval "is only of two provincial inspection systems that (China) selected and the audit report clearly states that the proposed rule will be based on this audit for the entire country,” said Food & Water Watch Executive Director Wenonah Hauter in a letter to FSIS. “As past audits have shown, (China) has had difficulty in ensuring that its provincial inspection offices are all rowing in the same direction. By limiting FSIS to evaluating two provincial offices, the PRC has manipulated the review to demonstrate that at least those two can be consistent.”

But some U.S. industry groups representing producers of pork, beef and other products hoping to get better access to the Chinese market, have also written to FSIS, supporting its proposed decision to allow in Chinese raw chicken.

In 2017, Ken Maschhoff, then the president of the National Pork Producers Council, wrote: “NPPC understands that the Chinese inspection system and its poultry processing facilities will be monitored by FSIS and that product regularly will be inspected under the same rigorous metrics and standards USDA uses in the United States.”