Report: California must fallow 10 percent of its most productive ag

At least a half million acres of California’s largest and most productive agricultural region, along with 13,000 jobs and 4 percent of the agricultural economy, will be lost over the course of implementing the Sustainable Groundwater Management Act (SGMA), according to a Public Policy Institute of California report released Feb. 20. Staying the course would lead to crop revenue losses of about $3.5 billion per year.

“The math is simple, the solutions are not,” said Ellen Hanak, director of the PPIC Water Policy Center and a coauthor of the report, during a summit discussing the findings. “You either add supplies, recharge more or use less water, or some combination.”

Despite a suite of novel management and infrastructure options on the table, agriculture in the San Joaquin Valley, which accounts for about 90 percent of the water used in the region, is certain to take a hit from the sustainability regulations as they are gradually phased in over the coming decade. The severe overdrafting of the valley’s groundwater basins, especially during the 2012-16 extreme drought, prompted then-Governor Jerry Brown to sign the legislation into law in 2014.

SGMA established 120 agencies for the valley, each tasked with formalizing a plan to be completely sustainable by 2040 or 2042. Agencies overseeing the most depleted basins are racing to finalize those plans for January 2020.

Hanak said that state, USDA, local and regional agencies and NGOs should all take part in this “all-hands on deck” approach.

“We’re optimistic because of conversations we’ve been having around the valley,” she said in an emotional appeal for action during her presentation. “But that’s not going to happen unless you all ask for it in a concerted way.”

Along with the water deficit, the report outlined the steep water quality challenges for drinking supplies in the valley. While Governor Gavin Newsom has set this as a priority for his administration, the challenge is costly and requires a timeline stretching over decades.

Dean Foods receives court approval for selling most of its assets
Report: Fed's share of water infrastructure investment must increase 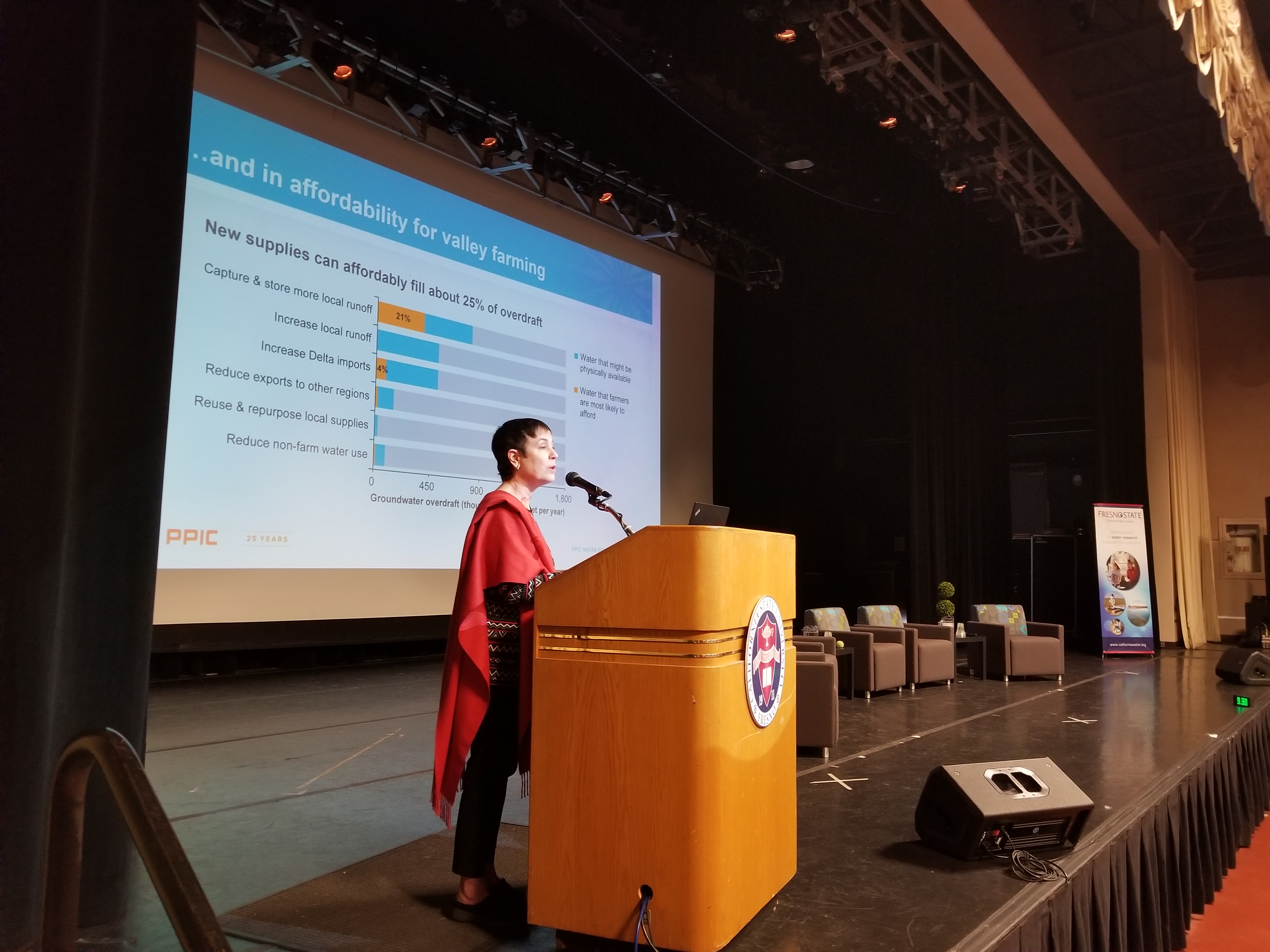 Pilot projects by the Central Valley Salinity Coalition found nitrates in the groundwater today are the result of agricultural inputs three decades ago, and treating this water would take 50 to 75 years, said David Cory, a water quality attorney with the coalition.

Solutions for one water problem, such as recharging groundwater through flooding or reverse pumping, could decrease water quality by flushing contaminants from the soil. Taking land out of production may contribute to air quality problems through dust and weeds. The valley is already a collection bowl for the nation’s worst pollution from particulates.

The report points out the two most promising tools would be an expansion of water trading markets across the region, which could reduce SGMA costs by nearly 70 percent, and crops that are still profitable but less water-intensive.

The PPIC report arrives at a time of heightened tension over water. On the same day the report was released, the U.S. Bureau of Reclamation announced valley districts may receive as little as 35 percent of their contracted water allotments this year from federal and state storage projects, despite a snowpack that has been

nearly 50 percent above average. Earlier this month, the California Farm Bureau Federation also filed a lawsuit disputing a state plan to reduce river flows to farms in the San Joaquin Valley by as much as 50 percent.

“Farmers feel like the candle's being burned at both regulatory ends,” Chris Scheuring, an environmental attorney for CFBF, told Agri-Pulse. “We would like to think that there are opportunities out there to mitigate even more for the loss of agricultural water supplies, so we don't lose quite as much farmland as PPIC seems to predict.”

Scheuring said CFBF agrees with many of the findings, and as the state enters this era of water constraint, “we’ve got to be very creative, smart and positive sum in our thinking.”