The Senate is expanding a long-stalled disaster assistance bill to aid farmers and ranchers swamped by recent Midwest floods, but it’s still not clear when Congress will pass the legislation due to a dispute between the White House and House Democrats over funding for Puerto Rico.

A draft Senate bill released Tuesday authorizes $3.05 billion to cover agricultural losses in 2019 as well as 2018, the focus of a bill the House passed in January. Still to be determined is whether the Senate bill will cover damage to grain and soybeans that was being stored on farms. Sen. Joni Ernst, R-Iowa, and a spokesman for Sen. Chuck Grassley, R-Iowa, told Agri-Pulse that issue was still under discussion.

There is no USDA program that currently covers such losses, although there is private insurance available. "That is a really challenging situation for producers who lost grain in storage," Bill Northey, USDA's undersecretary for farm production and conservation, said in an interview with Agri-Pulse.

The House-passed bill was designed mostly to cover damage to farms in the Southeast from Hurricanes Florence and Michael last year.

Both the Senate bill and the House draft would authorize $125 million in additional funding for the EWP but do not address ECP.

The Senate voted 90-10 on Tuesday to move forward with debate on the disaster bill, although it wasn’t clear how the Puerto Rico issue would be resolved.

House Appropriations Chairwoman Nita Lowey, D-N.Y., and the top Democrat on the Senate Appropriations Committee, Patrick Leahy of Vermont, issued a statement on Monday saying the Senate bill wouldn’t pass the House without what they considered adequate funding for Puerto Rico.

The Nebraska Agriculture Department estimates the state suffered $400 million in damage to the livestock sector and $440 million in losses to the crop sector.

Iowa Gov. Kim Reynolds has estimated Iowa’s total flood losses at $1.6 billion, including $214 million in agricultural damage. The losses also include $350 million in damage to levees operated by the Army Corps of Engineers and $175 million to nonfederal levees.

An official with USDA’s Farm Service Agency in Iowa said an estimated $34.2 million is needed to fund Emergency Conservation Projects from this year’s floods.

Livestock producers who lost cattle to the flooding can apply for assistance through the Livestock Indemnity Program, even if they can’t find the carcasses of the animals they lost.

Greg Ibach, a former Nebraska state agriculture director who is now USDA’s undersecretary for marketing and regulatory programs, told state agribusiness leaders that producers need to at least provide documentation that they owned the animals before the flooding. “We at USDA realized that it’s not a perfect world,” Ibach said when asked what producers should do if they can’t find livestock that were washed away.

LIP payments will cover 75 percent of the market value of the animals.

The losses in Iowa and Nebraska are still well short of estimates of damages in Georgia last fall, when Hurricane Michael slammed through the state’s cotton belt just as many farmers were heading to fields to harvest some of the best crops they say they had ever seen. The University of Georgia estimated the state’s total agricultural losses at $2.5 billion.

The bulk of the disaster aid would be provided in payments modeled after a disaster aid program enacted last year for 2017 losses but with increased coverage levels sought by Georgia cotton growers. The limit on recovering crop losses would be increased from 85 to 90 percent for producers with crop insurance and from 65 percent to 70 percent for growers without it.

Georgia lawmakers in particular have been expressing frustration with the bill’s delay. "Our farmers simply cannot wait on disaster relief any longer,” said Sen. David Perdue, R-Ga, "The situation in my state is dire. Rural communities are suffering. Economic activity is at an absolute standstill in many places because the federal government has yet to do its job."

The disaster bill became enmeshed in climate politics on Tuesday. Just before taking up the disaster bill, Republicans forced a vote on progressive Democrats’ Green New Deal resolution, which calls for zeroing out U.S. carbon emissions.

Ahead of the votes, Senate Democratic Leader Chuck Schumer, D-N.Y., used the disaster aid bill to chide Republicans for pushing what he called a “stunt, sham vote’ on the Green New Deal resolution rather than acting on more substantive climate bills. 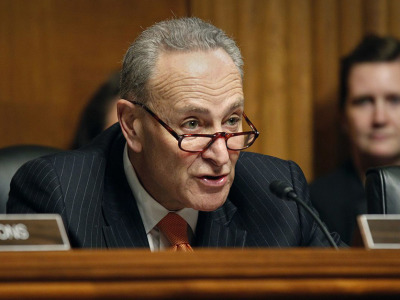 “You know what’s made disaster relief so much more necessary, so much more expensive? Climate change,” said Schumer. The warmer the air, the warmer the globe, the wilder the weather gets, as the people in Iowa and Nebraska have just experienced."

Schumer said Democrats “will not rest” until Republicans agree to address the climate issue.

“The need to help America — farmers, urban dwellers, suburban dwellers — from the devastating changes that climate change is bringing upon us is very real. So let’s stop this nonsense,” he said.

Meanwhile, Schumer and Leahy released a letter Tuesday that details concerns about the White House’s handling of needs in Puerto Rico after hurricanes Irma and Maria. Among the complaints is that the Federal Emergency Management Agency hasn’t been clear in allowing the island’s electrical grid and other infrastructure to be repaired in ways that will make it more resilient to future storms.

The White House raised an array of objections to the House version of the disaster bill in January, arguing in part that coverage for crop losses wasn’t warranted since producers could buy crop insurance. The White House’s position paper also cited a couple of provisions also included in the Senate draft released Tuesday — $600 million in nutrition assistance for Puerto Rico as well as a provision exempting farms who apply for USDA’s trade assistance payments from the $900,000 adjusted gross income limit that applies to commodity programs.