Peach growers want food retailers to 'practice what they preach'

More and more food retailers are promoting locally grown and sourced, yet they still import many low-cost canned products from China and other countries. California peach growers want to see their U.S.-grown products in stores instead.

In a letter to Kroger last month, Rich Hudgins, president and CEO of the California Canning Peach Association, urged CEO Rodney McMullen to reconsider its decision to sell canned and plastic fruit bowls sourced from China instead of selling U.S.-grown peach products. Similar letters were sent to the CEOs of Save-A-Lot and Lidl US.

“We believe that Kroger’s decision to sell imported Chinese peaches has far reaching ramifications,” Hudgins wrote. “Not only does it unnecessarily hurt American farmers and their families, it also impacts the unionized employees working in California’s processing plants and the local economy in our peach growing areas of California’s Central Valley.” He pointed out that last year, Seneca Foods announced the closure of their Modesto processing plant due to continuing losses related to low-priced subsidized canned peach imports from China. 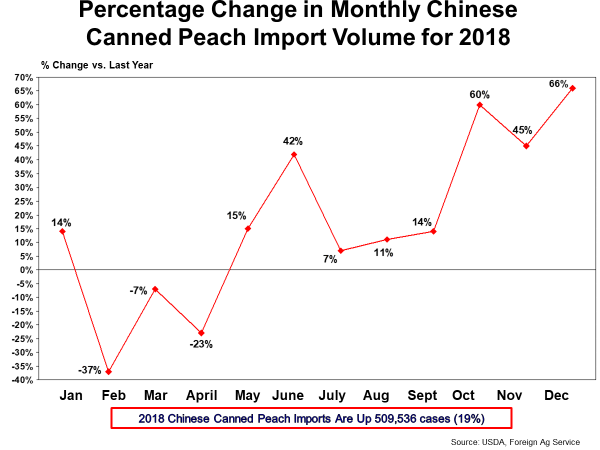 A Kroger spokesperson told Agri-Pulse that the company is reviewing the letter and added: “As America’s grocer, we are proud that the majority of food Kroger provides is sourced domestically.”

Kroger’s 2017 Sustainability Report  highlights the company’s commitment to locally produced goods as a way to lessen the impact on the environment through reduced transportation and minimized handling.  Hudgins pointed out that importing Chinese peaches from thousands of miles away should be “in direct conflict” to those commitments.

Hudgins tried a similar tactic with a large retailer in 2011, according to Ag Alert. The association, which represents nearly 400 grower-members, succeeded in influencing Target to sell California-grown cling peaches in 2012.