Agriculture Secretary Sonny Perdue suggested to lawmakers his department could soften the definition of able-bodied adults who are subject to food stamp work requirements, but he declined to budge from his plan to relocate two research agencies out of the nation’s capital.

Perdue, appearing before the House Agriculture Appropriations Subcommittee on Tuesday, also expressed concern that a spate of lawsuits against Monsanto Co. could force farmers to stop using glyphosate herbicide.

"I’m hoping the appeals court will see through this. It would be literally devastating to our productivity capacity worldwide” if glyphosate could no longer be used by farmers, Perdue said.

The comment came in response to questioning by Rep. Andy Harris, a Maryland Republican who said he is worried “that the use of Roundup could disappear” because of multimillion-dollar jury verdicts against chemical’s maker, Monsanto, now a unit of Bayer.

As for the food stamp issue, Perdue didn’t back away from his plan to make it harder for states to get waivers from work requirements in the Supplemental Nutrition Assistance Program. But he did signal to Rep. Barbara Lee, D-Calif., some flexibility for defining what it means to be classified as able-bodied.

Able-bodied dependents without children at home who receive SNAP benefits are generally required to work or be in an approved training program for at least 20 hours a week. Unless USDA grants a waiver from the state or area where those SNAP recipients live, they are allowed to be out of work for only three months of every three years. A proposed rule would largely limit waivers to areas with unemployment rates of at least 7 percent.

Critics have argued that many SNAP recipients who are classified as able-bodied often have undiagnosed mental illnesses or physical disabilities or chronic illnesses that make it hard for them to hold a job. “It’s mean spirited, I think it’s wrong,” Lee said of the USDA proposal to tighten the waiver rules. “People need this program desperately.” 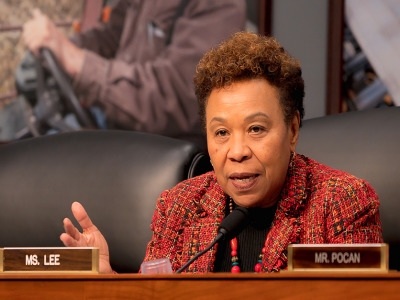 Perdue told her that the definition of able-bodied “may need some fine-tuning.” He didn’t say how it might be revised.

Lee went on to say that the USDA proposal would force some SNAP recipients to choose between paying their medical bills or buying food. Perdue responded, “I wouldn’t consider them able-bodied. We’ll have to define that.”

The chairman of the subcommittee, Georgia Democrat Sanford Bishop, pressed Perdue on why he was moving forward with the plans to move the Economic Research Service and National Institute of Food and Agriculture out of the national capital region in the face of broad, bipartisan opposition from former USDA officials and leading scientists and economists.

Bishop also took issue with Perdue’s previous argument that moving the agencies away from Washington would put them closer to their “stakeholders.” "Farmers and ranchers may be informed by ERS reports, but they are not direct recipients or users of ERS products,” Bishop said. ERS and NIFA “are not regulatory or farm program agencies.”

Bishop also pressed Perdue on why the department had not released a cost-benefit analysis of the plan and was simultaneously asking Congress for more than $300 million to renovate the USDA's South Building on Independence Avenue in Washington and the George Washington Caver Center in suburban Maryland. Those buildings would have plenty of room for ERS and NIFA, Bishop said. 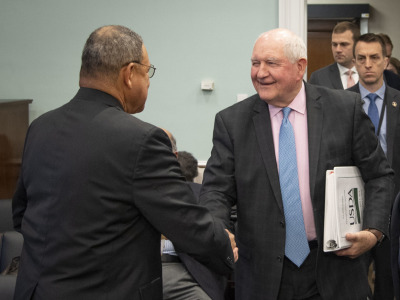 Bishop (left) and Perdue (right) greet each other before Tuesday's hearing.

Perdue said that the department was waiting to do the analysis until it knew what the relocation sites would be. He suggested that the former USDA officials who had criticized the relocation plan were out of touch.

“Some of the experts you talk about were around USDA before the internet was developed,” Perdue said.

Harris, whose rural district is east of Washington on Maryland's Eastern Shore, defended the relocation plan on the basis that it could benefit a rural area that is chosen for the new site. "Moving parts of the government into rural areas provides a stabilizing effect” to those locations, Harris said.

However, the agencies wouldn’t necessarily be moved to a rural location: The sites still under consideration include some major metropolitan areas, including St. Louis and Kansas City.

President Donald Trump’s budget proposed spending $25 million to pay for the relocation, but Perdue told reporters after the hearing that it wasn’t clear whether USDA would need additional funding to pay for the moves. That would depend, he said, on the proposal from the winning sites, suggesting they might cover the costs.