“States have been fairly aggressive … in requesting those waivers, for which we see no statutory or administrative authority in USDA to deny,” Perdue told the House Agriculture Committee on Tuesday.

Perdue also told the lawmakers he believes that President Trump was serious when he talked recently about potentially rejoining the Trans-Pacific Partnership.

He provided no other details on the administration’s thinking and told reporters after the hearing that he had not talked to Trump about his Davos remarks. "I am encouraged and would like to have that opportunity," Perdue said. Trump withdrew the United States from the trade deal shortly after taking office. The 11-nation agreement is now moving forward without U.S. participation.

Perdue also expressed confidence that the United States, Mexico and Canada would reach agreement by the end of the year on revisions to the North American Free Trade Agreement.

In other responses, Perdue said lawmakers should consider using the farm bill to reopen the Food Safety Modernization Act, which requires the Food and Drug Administration to write safety standards for fresh produce. Perdue said the FDA requirements have gone too far.

He said Congress needed to find a balance “between safety and productivity” on the produce rules. “I'm a little bit concerned that the unintended consequences of FSMA may move us in the same area as the Endangered Species Act,” he said. The produce safety standards include specific requirements on a number of issues, including water quality and testing, fertilizer and control of wildlife.

Perdue also urged Congress to resolve concerns that the tax bill’s new 20-percent tax deduction for pass-through income had given farmer cooperatives an unfair advantage over other businesses that purchase grain, milk and other commodities from growers. 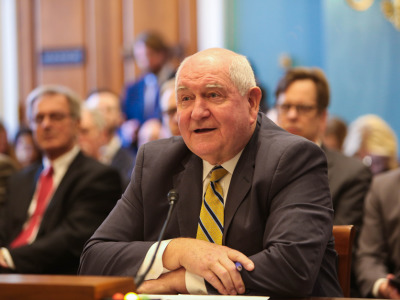 “We felt like that was an unintended consequence, and we would love to see a resolution as quickly as possible,” Perdue said of the tax deduction. The tax law “moves the needle a little too far” in the favor of co-ops, he added. Sen. John Hoeven, R-N.D., has been leading discussions with both sides on a resolution of the issue.

The House Agriculture Committee is preparing to write a new farm bill as early as next month, and tightening SNAP work requirements is expected to be a major issue. Speaking at the Crop Insurance Industry Convention on Monday, House Agriculture Chairman Mike Conaway, R-Texas, predicted that members of the conservative House Freedom Caucus would like the SNAP provisions in the draft legislation he is preparing.

The 1996 welfare reform law imposed work requirements on SNAP benefits - able-bodied adults without dependents can be out of work only three months in every three years - but the law required USDA to issue waivers to states when unemployment exceeds 10 percent or jobs are difficult to find.

Currently, five states and the District of Columbia have full waivers from the requirements. Twenty-eight states have partial waivers which apply to specific areas with unemployment problems. Seventeen states have no waivers.

“We would welcome really more statutory and administrative authority in order to manage that program, so it becomes temporary and a pathway back to independence and job creation,” Perdue told the committee’s ranking Democrat, Collin Peterson of Minnesota.

Peterson didn’t tip his hand as to his position on the issue but said he was “concerned we’ll get wrapped around the axle on SNAP like we did last time,” referring to Democratic opposition that helped sink a farm bill on the House floor in June 2013.

Another Democratic member of the committee, Jim McGovern of Massachusetts, raised concerns about Conaway’s remarks about potential Freedom Caucus support.