Congress to revisit good and bad of conservation easements

Moderate Democrat Peterson would seem an unlikely foe of conservation easements. Farm-raised and known as a stalwart farm advocate, he has long been active in the Congressional Sportsmen’s Caucus, which he once chaired.

But consider that while permanent conservation easements are generally seen benefiting the natural environment, their purposes and results can vary widely. For agriculture, they can be double-edged swords, preserving and protecting land for farming and ranching or, conversely, blocking some farming uses forever.

Peterson now chairs the House Agriculture Committee, and he’d like to tap the brakes on permanent conservation easements.

Although Peterson has told sources recently he wants to stop all purchases of such easements, in a lengthy emailed response to questions from Agri-Pulse, he calls for surgery rather than a firing squad.

“This needs to be about a common-sense approach,” he says. “I want us to think about what we’re doing, why we’re doing it, and what effects these easements have. Right now, we’re spending money at USDA and the Fish and Wildlife Service purchasing easements on land, but we’re not spending enough to manage that land” once acquired, he says.

USDA and FWS staff responsible for overseeing compliance with the easements are stretched too thin, he says, so the agencies have ended up with “thousands of acres of wetlands that don’t actually function like wetlands.” In addition, there are many FWS wetland easements that have not been restored as required by the easements. 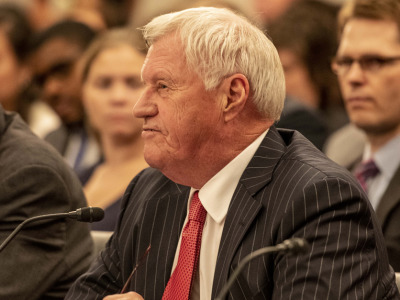 “If it’s a piece of land (or long-term easement) purchased with public dollars," he said, "it should be open to public use.”

He tried to plug that requirement into the 2018 farm bill and says he "possibly" will again in this Congress, “if there’s an opportunity … that gets bipartisan support and can get through the Senate.”

Another problem, Peterson says, is the way permanent easements can frustrate farmers in subsequent generations. While an easement sale on part of a tract can help make buying land more affordable to a beginning farmer, for example, he believes FWS “has also taken advantage of farm families in tough economic situations by offering cash to purchase long-term or permanent easements on their land. That ties the hands of the next generation in that family from making their own choices about the future of the family farm.”

Peterson says the Conservation and Forestry Subcommittee of the Agriculture Committee, chaired by Rep. Abigail Spanberger, D-Va., will dig into all types of USDA conservation easements, which are arrayed in the Agricultural Conservation Easement Program (ACEP). It’ll be “a stand-alone issue … and as part of a larger hearing on farm bill implementation,” he says.

Some commodity groups and other agribusiness interests agree with Peterson’s dislike of eternal restrictions on farming practices.

The National Association of Wheat Growers prefers working-land, rather than land-idling, conservation programs, says NAWG Environmental Policy Adviser Keira Franz. NAWG hasn’t much focused on easements, since many of them “are so tailored to the individual land and what the farmer is willing to accept or not accept,” so an easement is primarily a landowner choice, she says.

But, as a general matter, Franz says, “when it comes to easements, our policy is pretty clear: we oppose easements that would take land out of production.” 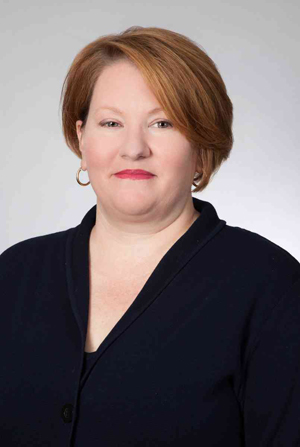 “Any time you restrict land use in perpetuity, you know, that’s a long time,” quipped Max Fisher, NGFA director of economics and government relations. “We like to let the markets work, including land use,” Fisher says, so “we fully support Chairman Peterson … (and) think it’s a good idea that he will open (ACEP) up and take a look under the hood.”

There’s gotten to be a lot under the hood.

“The earliest agricultural land trust activity began about in 1980,” says Sanaz Arjomand, federal policy manager for the American Farmland Trust. Now, she says, “our best estimate of total agricultural land protected throughout the country is 6.5 million acres,” in the form of easements (and sometimes surface title as well) often purchased jointly and owned variously by trusts, state and local government agencies, USDA, and others.

That total, based on an AFT national survey in 2017, “is a bit of a conservative estimate,” and will be updated, Arjomand advises.

ACEP now has two legs: Agricultural Land Easements (ALE), which impose specific limitations on cropping and livestock on all or parts of a tract, and the Wetlands Reserve Easements, which restrict all other uses or provide for restoring drained wetlands. 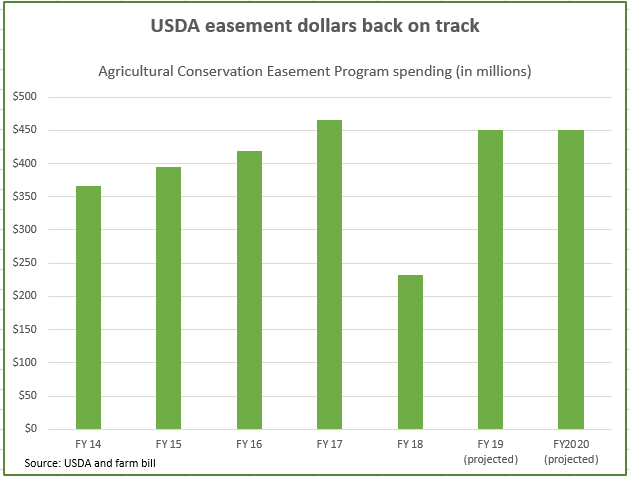 With federal, state and local governments and land trusts all investing in conservation easements, the total investment is adding up. After a dip in spending in fiscal 2018, the 2018 farm bill picks up the pace (see chart) with $450 million annually to help buy farmland, grassland and wetland easements and pay for much of any needed restorations for the protected acreage.

The farm bill restricts USDA’s easement payments in nearly all cases to recipients who average less than $900,000 in adjusted gross income (AGI). The recipient can, on the other hand, opt to deduct the appraised value of a permanent easement as a non-cash charitable contribution, taking a maximum write-off equal to at least half the recipient’s AGI.

Congress isn’t likely to seriously curtail ACEP anytime soon. Although ducks and geese can’t vote, there will be a lot more Minnesota waterfowl than people in Peterson’s district when the House panel likely examines the easements program later this year, and farmland and wetland conservation easements have loads of voting fans both in and out of farming.

“Certainly we are all in favor of keeping land (in farming) that is productive and that you can keep farming,” says Kellis Moss, public policy director for Ducks Unlimited. But where waterfowl habitat is concerned, he says, “these easements are really targeted at flood-prone areas, (many of which) have been previously drained.”

Moss says he empathizes with farmers and ranchers who get caught with earlier-contracted permanent easements restricting acres they would like to farm, “but I guess the reverse of that is if it is developed and taken out of farming, it’s pretty difficult to turn a parking lot back into a wetland habitat,” he says.

Perhaps a House hearing could determine how much ag land protection conservation easements ultimately accomplish. Researchers for the 2017 AFT study, for example, selectively surveyed 191 land trusts that expressed a priority to preserve farm and ranch lands, and nearly all of their easements “include the right to use the property for agriculture.” However, AFT says, “we found that most had protected other types of resources and had not saved significant amounts of farm and ranch land." In fact, just 31 percent of respondents “reported that preservation of ranch and farmland represented at least half of their land or easement acquisitions.”

So in its 2018 Farms Under Threat report findings, AFT urges “a dramatic increase in federal investments in agricultural land protection through the USDA Agricultural Conservation Easement Program.”