Perdue: Japan ag trade deal possible by the end of the month

Trade talks between the U.S. and Japan are moving quickly, and there’s a good chance the two countries can wrap up an ag-centric deal to lift Japanese tariffs by the end of May, U.S. Agriculture Secretary Sonny Perdue said Tuesday.

“I think we can get that done quickly, and hopefully by the time the president visits Japan,” Perdue said.

President Donald Trump, who hosted visiting Japanese Prime Minister Shinzo Abe in the White House Friday and Saturday, is scheduled to travel to Japan from May 25-28 for the accession of the country’s new emperor.

U.S. Trade Representative Robert Lighthizer met with Japanese Economy Minister Toshimitsu Motegi on the sidelines of Abe’s visit, and U.S. government officials tell Agri-Pulse that much of the talks were dedicated to agriculture trade and a potential abbreviated trade deal that could be completed far ahead of a comprehensive free trade agreement.

When asked if a comprehensive deal could be completed before Trump’s trip, Perdue responded: “Maybe not a comprehensive bilateral trade (deal), but certainly one that seals down the agriculture issues that we care about.”

Speaking to reporters at USDA headquarters, Perdue stressed the importance of the U.S. ag sector getting the same lowered tariffs as European and Pacific Rim countries that implemented trade pacts with Japan already this year.

“We want to be treated the same way (Japan) treats these other 10 countries in the (Comprehensive and Progressive Agreement for Trans-Pacific Partnership) as well as the 28 countries in Europe,” Perdue said. 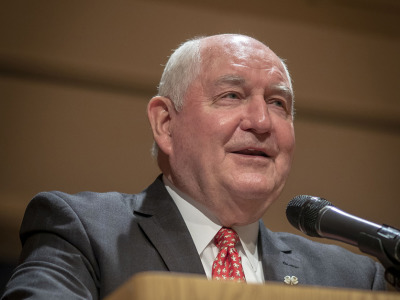 And it won’t be good enough to just cut tariffs for U.S. beef, pork, wheat, potatoes and other commodities, Perdue stressed. The Japanese need to cut those tariffs retroactively.

The U.S. was originally one of the founding members in the Pacific Rim pact, back when it was still called the Trans-Pacific Partnership, but President Donald Trump followed through on a campaign promise and pulled the U.S. out during his first month in office. At the time, it seemed like the trade deal might fall apart, but the countries renamed the deal and decided to push on without the U.S.

Since then, Japan has reduced its tariffs on ag imports from those countries twice, while Japanese importers are forced to pay higher duties for U.S. commodities.

U.S. wheat is just one commodity already suffering. As of April 1, U.S. wheat cost about $20 more per metric ton (about 55 cents per bushel) than competing wheat from countries in Europe or the CPTPP, according to officials with the U.S. Wheat Associates.

The U.S. has been selling about 3 million metric tons of wheat per year to Japan, but that number is expected to drop if the U.S. doesn’t get on a level playing field soon. USW spokesman Steve Mercer said in a recent interview the group expects U.S. wheat exports to Japan could be cut in half in four or five years.

U.S. dairy is another sector desperate for a pact with Japan that lowers tariffs. U.S. exporters of cheese, whey, lactose and skim milk powder have also been put at a disadvantage to their competitors in European and CPTPP countries, Tom Vilsack, president and CEO of the U.S. Dairy Export Council, told Agri-Pulse in a recent interview that the U.S. dairy industry would lose billions of dollars so long as the U.S. is at a disadvantage.

It’s unclear if Japan will agree to all of the benefits for the U.S. that it did when the U.S. was still part of the TPP, but if it does, that would help a lot of California farmers sell a lot more rice.

Japan buys almost exclusively medium and short grain rice, which is primarily grown in California. Under the TPP, Japan agreed to set up a 50,000-ton duty-free quota for U.S. rice that would rise to 70,000 tons in 13 years.

Ted McKinney, USDA's trade undersecretary, declined to comment on timing for a deal with Japan, but stressed the importance of getting it done.

“We cannot get to a deal on Japan quick enough,” he said. “They are our longtime friends. Easily … the most reliable market to us. Whatever we can do with Japan, we want to do so long as it's mutually beneficial.”

He declined to discuss what Japan is asking for in return for a quick, ag-centric trade pact.

Correction: A previous version of this story referenced a timeline of "next month." The story and headline have been updated to reflect a more accurate timeline.