Multiple sources agree that African Swine Fever, first confirmed in China on August 2, 2018 in the northeastern city of Shenyang, is ravaging the Asian giant’s pork industry in a way that will have impacts on global protein production and feed consumption for several years in the future.

But trying to pin down the actual extent of the virus, which is fatal to animals but not to humans, can be difficult. Some pork producers aren’t reporting losses and the Chinese government is not known for its transparency. Plus, it’s a moving target, as new outbreaks appear to be popping up almost daily in China, as well as Vietnam, Mongolia, and Cambodia. (See FAO map.)

“This is something all of us in agriculture need to keep a very close eye on. It has major implications with regards to China’s demand for feed grains, oilseeds and demand for meat going forward. This is going to be a very significant topic going forward for us. Not just in China, but agriculture globally.” 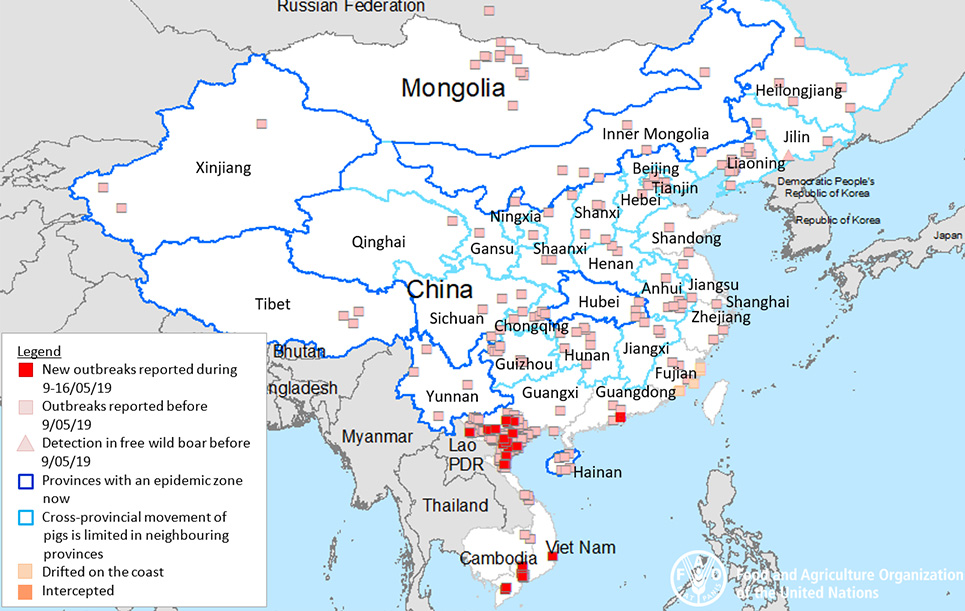 Rabobank’s Research team has been monitoring the state of the hog industry in China. The team’s April estimates indicate Chinese pork production losses of 25 to 35 percent by the end of 2019 and a net supply gap of almost 10 million metric tons in the total 2019 animal protein supply, although the team acknowledges that the situation continues to advance progressively. Reports of extreme losses (over 50 percent) are limited to confined areas, their report notes.

“At this point the only constants are that the losses in China are unprecedented, there will be a significant shortage of available protein worldwide, and African Swine Fever will continue to spread throughout southeast Asia,” notes a Rabobank spokesperson.

Dr. Tiffany Lee, director of regulatory and scientific affairs at the North American Meat Institute, recently returned from China and told Agri-Pulse that “losses due to African Swine Fever and depopulation efforts are large, and will impact the swine industry, both domestically and globally.  The country is still going through multiple epidemiological investigations, and we hope to know more information as the results of those investigations are released.”

Brett Stuart, co-founder of Global AgriTrends, agrees that the ASF losses are “staggering” and “far beyond what has been reported.” He was in China last week to attend meetings and an ASF conference.

“The disease has spread far and wide across China, thousands of miles. It has ravaged small and large farms. The vast nature of China's hog sector (estimated at 42 million farmers) makes it difficult to get the real story,” Stuart says.

He says calculating the percentage of China's hogs that are gone is anyone's guess.

“There have been some sobering reports from feed companies with sharply lower sales, similar to pharma sales and genetics. The China Swine Association was quoted in February as reporting that 30 percent of China's hogs are already gone,” he notes.

“It could take years to fully repopulate their swine herds,” because many producers have no good system to stop the spread of the virus, says John Baize, a soybean industry consultant. “This will really hasten the movement of production to northern parts of China and to large, sophisticated operations and drive many small operations out of business.”

Before the ASF outbreak, Rabobank analysts reported that China’s 700 million pigs consumed about 250,000 metric tons of lactose over their lifetime. “The expected 150-200 million reduction in pigs represents an estimated 54,500 to 72,500 metric ton decrease in lactose or lactose-equivalent demand in piglet feed,” the firm noted.

As a result of higher inclusion in feed rations and a growing poultry sector, soymeal usage will only experience a modest decline.

Suderman agrees there have been some trade-offs impacting soymeal. He says his fellow employees on the ground in China report hog feeding is down 40 percent, but there is no direct correlation to hog population loss.

Soymeal usage has not dropped by the same amount because — as feeding went down and soymeal became cheaper — producers who were still feeding hogs increased soymeal amounts in the ration, Suderman says. “The same trend is happening in chicken production as well, with soymeal usage up about 15 percent. In addition, more soymeal is replacing canola meal in fish production,” adds Suderman.

Who are the biggest beneficiaries of the ASF outbreak in China? Rabobank say animal protein companies with an “exportable surplus and access to markets in China and Southeast Asia.

“The EU, U.S., and Brazil appear best placed to respond to increased import demand for pork and other animal proteins,” Rabobank analysts report. However, the firm says that trade restrictions, like the current tariffs on U.S. pork exports to China, are restricting trade. And the U.S. cannot export poultry to China due to a ban associated with avian influenza.

“If the trade tension that underlies these barriers does not ease soon, it could also complicate the global trade response to ASF,” Rabobank noted.