The African Swine Fever outbreak in China is nothing new, but the impact on purchasing patterns of Chinese consumers might be.

Pork has long been the most popular protein in China, but rising consumer concerns about the product’s safety in the midst of a disease outbreak and a growing middle class with the ability to look elsewhere are chipping away at the protein’s domestic crown.

The signs were emerging last year, when an August 2018 USDA report predicted an increase in overall pork consumption, but found “the per capita consumption of pork in China is flat, or possibly falling.”

“With increasing living standards, consumers are diversifying their meat protein sources and adding more seafood, beef, and mutton to their dining tables,” the report noted. “Moreover, poultry meat is growing in popularity due to consumer perceptions about chicken as a healthier protein.”

Since that time, the disease — which is fatal in hogs but poses no human health risk — continues to rip through the country, perhaps intensifying the issue for consumers. Concerns surrounding the disease frequently worked their way into conversations at last week’s U.S. Meat Export Federation Spring Conference in Kansas City, Mo. Erin Borror, an economist for USMEF, pointed to similar conclusions as had been cited in the USDA report.

“As incomes grew, they're going to consume more beef, more sheep meat, more seafood, and so I think that this whole ASF situation could really exacerbate that," Borror noted. She predicts that Chinese consumption of pork will rebound in time, but "this is a long-term game."

“The ability to rebound after ASF could likely take a while and so you're looking at possibly permanent transformation of Chinese consumption,” she added. In some mass-feeding cases like factory or canteen feeding, she said the switch to poultry happened “like that.” 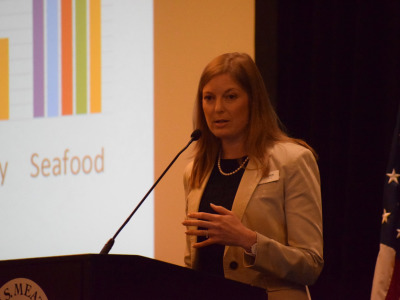 The Chinese populace deciding — for any reason — to curb its pork intake could have ramifications throughout the global value chain. USDA estimates Chinese pork imports from all sources could drop more than 20 percent in 2019 as a dwindling number of consumers still looking for pork opt for cheaper domestic products.

As anyone involved in the global food system can tell you, consumer perception is a daunting opponent. Everything from GMO politics to the latest diet fad play a role in what ends up in shopping carts and — in turn — farmer pocketbooks. But when it comes to China’s dietary planning, economics will still rule the day.

“Price will play a big part in how the consumption mix among proteins evolves in the next couple of years,” Joel Haggard, USMEF’s senior vice president for the Asia-Pacific region, tells Agri-Pulse.

But just how that will shake up the global protein market remains to be seen. Haggard said it boils down to "a math equation" to figure out what pork shortfalls will need to be and what other protein sources — things like poultry, eggs, duck, and beef — will be used to fill the gap.

"Will all of all those increased imports of alternate proteins be able to make up for the pork? Still a little early to be able to say that," he said.

But Haggard also noted beef is seeing a major uptick in interest.

"Beef is going crazy in terms of import volumes, and that's going to stay strong," he said. At a recent conference in Shanghai, Haggard said beef booths for countries like Australia, New Zealand, and South American exporters "were very busy, and presume they were writing orders." U.S. product still faces a steep duty in the country — 37 percent — and will inevitably be "a long-term play," he said, based on the quality of the product based on an inability to compete with South American exports purely on price.

Haggard says there’s been surveying in China to try to gauge consumer perception, but those surveys also come with questions of reliability and accuracy. He says a protein shortage in China is not a concern because of ASF. "It’s just a question of what they can transition into and how the markets react as they transition into them,” he said.

Chinese consumers aren’t the only ones making potentially permanent changes in ASF’s wake. National Pork Board Senior Vice President of Science and Technology Dave Pyburn says some pork production facilities in China “are now filled with poultry and don’t know if they’ll ever have pigs in them again.”

Keeping the disease at bay has proved challenging; getting rid of it has also brought complications of its own. Pyburn says where ASF has been detected, it has proved to be a rough disease to shake.

“I'm hearing that as units break with (ASF) they do try to depopulate, disinfect, have some down time and then repopulate … I have yet to hear of any units that have successfully repopulated and kept the virus out again,” he said, citing conversations with veterinarians traveling to China.

Estimates on the total ASF impact on Chinese hog production vary, but April estimates from Rabobank’s Research team project production losses of 25 to 35 percent by the end of 2019.