Lawmakers are looking to catch national farm bankruptcy law up with the size of debt and needed business reorganization schemes that financially overwhelmed farmers and ranchers face these days.

To that end, Sen. Chuck Grassley, R-Iowa, and a bipartisan cadre on the Senate Judiciary Committee, which oversees bankruptcy laws, expect to advance a Family Farmer Relief Act of 2019, S.897, which takes a very singular action: It’ll hike the debt ceiling for farms seeking protection and a restructuring plan under the farm bankruptcy law, or Chapter 12, to $10 million.

An identical House bill, H.R. 2336, also has bipartisan sponsorship, and Agriculture Committee members are trying to get that chamber’s Judiciary Committee to review it.

“We are hoping to get this across the finish line as soon as possible,” though the handling in both chambers is still being worked out, says Andrew Walmsley, congressional relations director for the American Farm Bureau Federation.

The limit looks like a lot of money, but the economic size of production agriculture has zoomed up. For example, USDA data shows the average value of U.S. cropland, as well as the per acre value of farm assets overall, have both more than doubled since the $3.2 million cap was set 14 years ago.

“What (the lawmakers) are doing, largely, is a reality check,” says Todd Van Hoose, president and CEO of the Farm Credit Council. “The size of family farms, as we all know, has changed dramatically,” along with the size of capital investment and cash flow. So, when considering the volume of debt appropriate for Chapter 12 filings, he says, “what we ask is, ‘What does it take to support a farm family?’ People don’t realize how big that is now.” 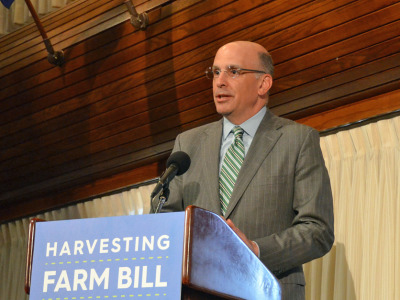 However, many bankers object to raising the debt cap. “The $10 million number is an arbitrary number,” says Mark Scanlan, senior vice president of the Independent Community Bankers of America (ICBA). “Chapter 12 is supposed to be for 'family' farmers, not all farms in the U.S., (and) going to $10 million would make almost every farm eligible, including some of the largest farms in America,” he claims.

The higher cap increases risk to bankers, Scanlan says, and a better approach would be for the government, rather than bankers, to accept increased risk by raising “the loan limits on (USDA) guaranteed loans to $2.5 million to assist family farmers before they go into bankruptcy.”

So what will a higher dollar limit accomplish?

“Raising it to $10 million would provide relief for, you know, a select number of farmers who have been excluded from Chapter 12,” said Kristine Tidgren, director of the Center for Agricultural Law & Taxation at Iowa State University.

She points to a recent analysis by Jim Monke, agricultural policy analyst for the Congressional Research Service, estimating that debt held by 7,700 of the nation’s 2 million farms exceeds the current $4.2 million ceiling. Monke estimates farms in that debt range hold 17 percent of total U.S. farm debt.

Tidgren points out that 7,700 farmers represent only 0.4% of American farmers, and, “of course, not all of those farms are in financial distress, and not all of those farms would even qualify for Chapter 12,” which also requires that the petitioning farmer must be engaged in farming, get at least half their income from farming, and that at least half their accumulated debt is owning to farm operations.

On the plus side, she says, “there are farms within (the proposed new) debt range that right now would be good candidates for Chapter 12 but can’t file because of the debt limit,” and the bill would make thousands of them eligible.

Indeed, a rising tide of farmers are seeking Chapter 12 protection in recent years as farm income has slipped. The American Farm Bureau has been keeping a tally that reports about 500 filings in each of years 2017 and 2018, especially among dairy farms and wheat and corn producers. Among states, the highest incidence was in Wisconsin (49 last year); there's high numbers, too, in Indiana, Kansas, Minnesota, Nebraska, New York, North Dakota, South Dakota, and Utah.

The trouble, ISU’s Tidgren says, is that the poor markets for many crops and the economic downturn in farming leaves many with financial stresses “that can’t really be solved by Chapter 12, because one of the key issues is … having a plan to pay off debt.” One way or the other in a restructuring, she says, the farm must demonstrate it can cash flow and survive.