US and Mexico prepare for showdown over the border

Some of Mexico’s highest-ranking government officials will present a proposal to the White House Wednesday on controlling border security in an effort to stop the Trump administration from turning an immigration issue into a trade war.

Mexican Foreign Minister Marcelo Ebrard told reporters he believes there’s an 80% chance the two countries will be able to reach an agreement and stop the U.S. from imposing new tariffs on Mexican goods next week, but President Donald Trump was not so optimistic.

“They're going to meet on Wednesday … and we’re going to see if we can do something, but I think it’s more likely that the tariffs go on and we’ll probably be talking during the time that the tariffs are on and they’re going to be paid,” Trump said Tuesday during a joint press conference in London with U.K. Prime Minister Theresa May.

Trump has expressed growing frustration with Central American migrants making their way through Mexico to get to the U.S., and last week he announced he would hit Mexico with rapidly increasing tariffs unless the country staunched the flow. Trump said the U.S., under the 40-year-old International Emergency Economic Powers Act, would hit all Mexican exports with a 5% tariff on June 10. The rate would go up to 10% on July 1, 15% on Aug. 1, 20% on Sept. 1 and 25% on Oct. 1. 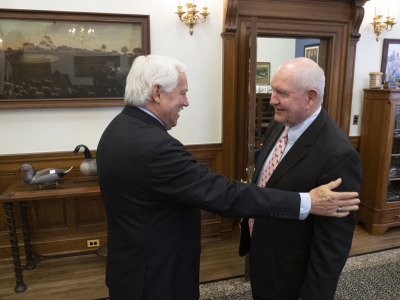 Trump has not set any specific goals for Mexico to achieve other than a broad demand that it reduce the number of migrants reaching its northern border with the U.S.

“What Mexico has been doing to this country for so many years — like 25 to 30 years — with the drugs and human trafficking and illegals all pouring through Mexico — no good — and caravans. No good.” Trump said Monday.

While Trump seems intent on using the tariffs, Mexican President Andrés Manuel López Obrador appears just as adamant in avoiding the new taxes that would hit everything from avocados to car parts.

"We believe in dialogue and politics, which is also negotiation,” Obrador said. “We are not going to enter into a trade war, a war of tariffs, of taxes. We do not want that confrontation with the United States or any country.”

But there may be no choice, and the U.S. agriculture sector is bracing for the consequences. It was just Monday that the U.S. and Mexico settled their last feud. The U.S. informed the World Trade Organization that it was dropping its “Section 232” tariffs on Mexican steel and aluminum. Mexico informed the WTO it was dropping its retaliatory tariffs on U.S. cheese, pork, and other products.

The tariffs had virtually assured that neither the U.S. nor Mexican legislatures would approve the newly renegotiated North American trade pact, and farm groups rejoiced when the taxes were dropped.

The jubilation did not last long, and now farm groups and farm state lawmakers are coming forward to warn the Trump administration not to reignite disputes with one of the top foreign markets for U.S. goods, including corn, soybeans, beef, pork, rice and high fructose corn syrup.

“We’re struggling right now to retain our market share and continue to be viewed by our international customers as a reliable supplier,” said International Dairy Foods Association President and CEO Michael Dykes. “This new tariff on Mexico — just after we lifted the Section 232 tariffs last week — will not help get USMCA ratified. Tariffs put us further behind competitors and chip away at our ability to get USMCA across the finish line. We must return to a market principled approach and regain market share from our competitors who’ve benefited from these trade disputes.”

The threat of new tariffs on Mexico and the possibility of new retaliation — almost certain to hit U.S. ag exporters the hardest — comes at the worst possible time, says Senate Finance Committee Chairman Chuck Grassley. Speaker of the House Nancy Pelosi was finally getting close to throwing her support behind USMCA, he said, and Mexico and Canada were signaling they were prepared to ratify the trade pact after the U.S. agreed to lift its steel and aluminum tariffs.

“A tariff is a tariff, whether it’s steel and aluminum or whether it's this sort of tariff and this one could be a little bit worse,” Grassley told reporters Tuesday. “I’m concerned about what these tariffs mean for USMCA.”

USMCA is not the only trade pact the new tariffs endanger, the Iowa Republican said. The fact the U.S. is willing to hit a country with new tariffs so shortly after a new trade pact was agreed to would be chilling for any future trade pacts, he said.

“It hurts our credibility …” he said and stressed that a smooth ratification of USMCA was meant to show countries like Japan that the U.S. is a reliable trading partner.

“Hopefully these tariffs will never be implemented and we can move ahead with USMCA because getting that passed is my top priority,” Grassley said. “We can’t have an agreement with tariffs in the way.”