US-Mexico rift far from over and still a trade threat

President Donald Trump is blurring the lines between immigration and trade by continuing to threaten Mexico with tariffs for its border security policies. Ag sectors in both countries fear the lingering tensions may weigh heavily on their businesses as well as the fate of the U.S.-Mexico-Canada Agreement.

Last Friday, Trump pulled back from immediately levying tariffs on Mexico because the country agreed to take strong measures to stop Central American migrants from reaching the U.S., but there’s no guarantee Mexico will succeed in placating Trump at a time when neither Mexico, the U.S. or Canada has yet ratified the USMCA.

“You saw that the announcement was that the president would indefinitely suspend the tariffs,” Secretary of State Mike Pompeo said Monday. “That means if it’s the case that we’re not making sufficient progress … those tariffs will go back in place. And as we had these conversations with my … counterpart (Mexican Foreign Secretary Marcelo Ebrard), we both understood that.”

While a crisis — one that Mexican officials said would have resulted in retaliatory tariffs on U.S. goods — was averted, the uncertainty over the future remains.

“I am glad that the President has abandoned his ill-conceived plan to put a new tariff on Mexico,” noted Subcommittee Chair Jim Costa, D-Calif., during a House Ag Subcommittee hearing yesterday. However, he remains “concerned that this whole exercise has slowed down the positive momentum that existed after the Administration finally agreed to lift the 232 tariffs on Mexico and Canada only a few weeks ago.”  Costa pointed out the U.S. has the smallest agricultural trade surplus in over a decade and “We are all concerned about that.” See chart.

Late last month when Trump first threatened the tariffs on Mexico, U.S. ag groups and farm state lawmakers came out swiftly to warn that the fate of the USMCA was being jeopardized. 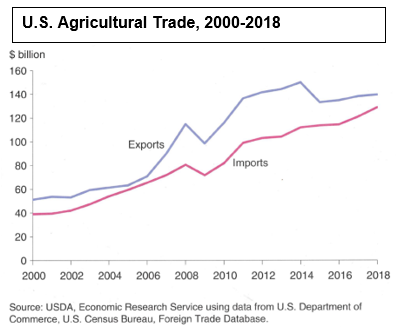 “We respectfully ask the administration not to implement these new tariffs,” U.S. Wheat Associates Chairman Chris Kolstad said at the time. “The potential fallout for farmers would be like struggling to survive a flood, then getting hit by a tornado.”

Trump may have backed off for now on the tariffs, but the U.S. relationship with Mexico and USMCA are still on shaky ground.

“It’s not over yet,” Rep. Josh Harder, D-Calif., told Agri-Pulse on the sidelines of a Tuesday House Agriculture subcommittee hearing on trade. “The whole trade regime is at stake. … He’s trying to get through a trade deal while at the same time he is antagonizing our trade partners. I think it’s pretty clear he hasn’t thought through his trade strategy, and the folks who are caught holding the bag are farmers that are trying to export crops.”

Rep. Costa, D-Calif., agreed on the importance of USMCA to the U.S. ag sector, but stressed to reporters after the hearing that the latest rift with Mexico is an unwanted threat.

“This invoking of tariffs and then walking them back is making a difficult situation harder because the passage of USMCA is not a foregone conclusion,” Costa said. “There are still issues that many of my Democratic colleagues would like to see focused on and this just further complicates … the other issues.”

It was those other issues, such as enforcement of USMCA provisions that require Mexico to improve labor and environmental standards, that some lawmakers at the Tuesday hearing concentrated on. House Speaker Nancy Pelosi still appears unwilling to bring the trade deal up for a ratification vote, said Rep. Glenn Thompson, R-Pa.

“I am not concerned about what the president did with threatening these additional tariffs related to the illegal immigration issue," Thompson told Agri-Pulse. “The president did it to get Mexico’s attention and it seemed to work. … I’m pleased with what the administration did and I think the president has been pretty effective when it comes to weaponizing tariffs.”

Conaway stressed that if House Democrats had agreed to fund Trump’s border wall and approve new, tighter asylum laws, the U.S. might not be in the latest immigration dispute with Mexico.

But regardless, Trump is wrong to conflate an immigration crisis with international trade, said Minnesota Farm Bureau President Kevin Paap.

Farmers still stand behind Trump’s tariffs and tariff threats to try to resolve trade disputes, Paap told Agri-Pulse, but not when it comes to other issues outside international commerce.

Paap is in Washington to meet with lawmakers as part of a Farm Bureau fly-in, and trade is top on his agenda.

“As I do Hill visits this afternoon with our Republican members and our Democratic members, [trade] is going to be my number one, two and three priority,” Paap said Tuesday.

That’s a common priority in the U.S. ag sector. More than 900 ag groups and businesses have signed onto a new letter to House and Senate leaders urging them to ratify USMCA as quickly as possible.

“Over the last 25 years, U.S. food and agricultural exports to Canada and Mexico have more than quadrupled under NAFTA — growing from $9 billion in 1993 to nearly $40 billion in 2018,” they said in the letter. “NAFTA has significantly helped create a reliable, high-quality supply of food products for U.S. consumers, while supporting more than 900,000 American jobs in food and agriculture and related sectors of the economy.”