House Dems dig in on demands to change USMCA

Several House Democrats stood in the sweltering summer heat Tuesday afternoon with AFL-CIO President Richard Trumka, pledging to gathered reporters and supporters there will be no vote on the U.S.-Mexico-Canada Agreement until the Trump administration meets their demands.

That was shortly after a packed two-and-a-half-hour hearing in which Democrat after Democrat warned that USMCA could not be passed as it is written and agreed upon by the leaders of the three countries last year. That rubbed wrong the outnumbered Republicans on the Ways and Means Trade Subcommittee, who all urged that the trade pact be voted on and approved as soon as possible.

“Every day that we delay, American consumers, farmers and businesses lose,” said Rep. Jason Smith, R-Mo. “The ink on USMCA is dry and the American people are urging Congress to act. Let’s take a vote.”

But many Democrats are nowhere near ready for that vote. Their demands include a complete removal of a provision under which Mexico and Canada agreed to extend patents for biologic pharmaceutical drugs to 10 years as well as the installation of new labor standard enforcement provisions.

Cutting the biologics patent expansion could be the easiest of the demands - if the administration agrees - because neither Mexico nor Canada had sought its inclusion. Adding new enforcements for labor standards looks to be trickier and would need to be negotiated between all three countries.

Mexico’s legislature has already ratified USMCA and the country has even passed major labor reforms as called for under the pact, but Democrats don’t trust Mexico to actually implement the reforms that call for it to examine and rewrite about 700,000 labor contracts that were written under business-formed unions that gave workers little or no say in the process.

“If we were to pass the NAFTA agreement in its current form, we would basically have to take Mexico at its word or rely on a broken state-to-state dispute settlement mechanism that hasn’t been effective where the U.S. government has used it, and that has never been used to enforce labor obligations,” said Rep. Earl Blumenauer, D-Ore, chairman of the subcommittee. “The challenges presented by Mexico’s labor reform demonstrate the new NAFTA does not contain adequate tools to ensure that Mexico’s labor reform stays on track.” 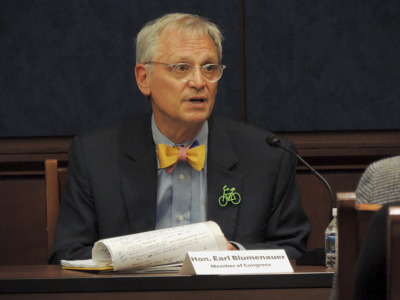 Democrats will require the newly renegotiated North American Free Trade Agreement to be essentially renegotiated again in order to make changes to the core text of the pact, said Rep. Rosa DeLauro, D-Conn., who is one of the nine members on the Trade Working Group assigned by House Speaker Nancy Pelosi to work with the White House on the trade pact.

There will be no side letter that can be tacked on to NAFTA 2.0 or simple “implementing language” that will satisfy Democrats, DeLauro said. If the Trump administration insists on either of those two avenues, they will be rejected, she said. And that was the message delivered to U.S. Trade Representative Robert Lighthizer Tuesday evening when he sat down with the working group, which is led by House Ways and Means Committee Chairman Richard Neal, D-Mass.

While the immediate ratification of USMCA is widely supported by the U.S. ag sector, many lawmakers, union leaders, auto sector workers, machinists and others still feel stung by NAFTA and the hundreds of thousands of jobs they say were lost when U.S. companies sent factories south of the border to take advantage of cheap labor.

Rep. Debbie Dingell, D-Mich., still blames NAFTA for idle manufacturing plants. She says she is all in favor of a new pact with Mexico and Canada, but only if she can guarantee to her constituents that Mexico will live up to its pledges.

“I’m a car girl from a car state,” Dingell said, noting that NAFTA “shipped jobs to Mexico. I want those jobs to come home. My workers beg for a NAFTA 2.0 … but my workers also say to me, ‘Don’t give us the shaft.’”

The shaft, Democrats fear, would come in the form of Mexico not living up to its promises to improve labor standards and wages – something they believe is a likely scenario given the country’s long history of allowing so-called “ghost unions” to dictate workers’ rights.

“Rather than representing the interests of workers, these trade unions work at service to the party and the state and enjoy a privileged position, maintaining vast control over labor relations in the country still …,” said Gladys Cisneros, program director for Mexico’s Solidarity Center.

Testifying before the Ways and Means subcommittee, she stressed that the “vast majority of workers are covered by employer protection contracts, or secret agreements negotiated between a non-democratic union and a complicit employer without the knowledge or consent of the workers. In most cases, workers never know that a negotiation took place.”

But Republican lawmakers like Rep. Vern Buchanan, R-Fla., say Mexico has more than proven it’s ready to change its ways.

“By passing its labor legislation and ratifying USMCA, Mexico has, in my view, demonstrated a clear commitment to vastly improving its labor conditions and to free and fair trade,” Buchanan said. “And the Mexican government has demonstrated its good faith to implement this new law thoroughly and effectively.”

Blumenauer, who stressed his desire to see USMCA ratified and agreed that time is a factor, said he believes Congress can approve the pact by the end of the year at the latest.

“I think there’s no interest on the part of our leadership … to have this bleed into 2020,” Blumenauer said. “Our hope is that we can move with dispatch, get our concerns resolved, strengthen the agreement and move forward.”

Correction: A previous version of this story attributed a quote to Rep. Adrian Smith, R-Neb. It has been changed to reflect the correct attribution to Rep. Jason Smith, R-Mo.