Home » Big changes or a band-aid for the Valley’s air quality challenges?
WEST

Big changes or a band-aid for the Valley’s air quality challenges?

A draft environmental justice plan proposes big changes for the small San Joaquin Valley city of Shafter. To fix the air quality here, which is among the worst in the nation, the state will spend $50 million annually on test projects like shifting highway traffic to avoid the area, cutting back on idling at drive-throughs and adding incentives for industry to upgrade to clean locomotives, for consumers to buy electric cars and for the city to switch to electric school buses and garbage trucks.

Dairies and farms will see similar incentives programs as well, launching as soon as the state approves the plan. Yet one component, a citizen-run air monitoring network, is already placing scrutiny on pesticide use in the area

Some question whether the plan is strong enough, when wildfire smoke has set back much of California’s greenhouse gas reduction efforts, and others wonder how a multi-million dollar investment in a small community will be any more than a band aid for a region long-plagued with air quality issues.

While the plan is limited to a seven-mile radius around Shafter and its 17,000 residents, the city is within the most agriculturally productive county in the nation. Kern County accounts for about $7.3 billion in annual farm sales, with tree nuts, milk and table grapes topping the list of commodities.

The plan is one of two pilot projects the state is running in poor, rural communities to tackle air quality issues that have eluded regulators for decades. A sister plan is also being drafted in South Central Fresno. Lessons learned here will be used for 18 other projects in the Central Valley, with 30 in total across the state.

The projects stem from Assembly Bill 617, a measure authored by Democratic Assemblymember Cristina Garcia of Bell Gardens and signed into law by Governor Jerry Brown in 2017. Since then, the state has allocated a total of $490 million for emissions reductions incentives, paid for by the Greenhouse Gas Reduction Fund (GGRF).

The fund, however, has been tapped for “non-air quality related state programs,” such as the new Safe and Affordable Drinking Water Fund, leaving the San Joaquin Valley Air Pollution Control District concerned the money for these pilot projects may not last or be replaced.

Since October 2018, the California Air Resources Board (ARB) has been working with the air district and local communities to implement the measures in AB 617, beginning with community steering committees. The district has led dozens of listening sessions and workshops with the two committees as it builds a checklist for the plans, which is known as the Community Emissions Reduction Plans, or CERPs. This month the district released drafts of the CERPs, spelling out the steep challenges ahead and outlining a long list of proposed measures. The air district also acknowledges it implements the most stringent air regulations in the country, with nearly 650 rules already on the books 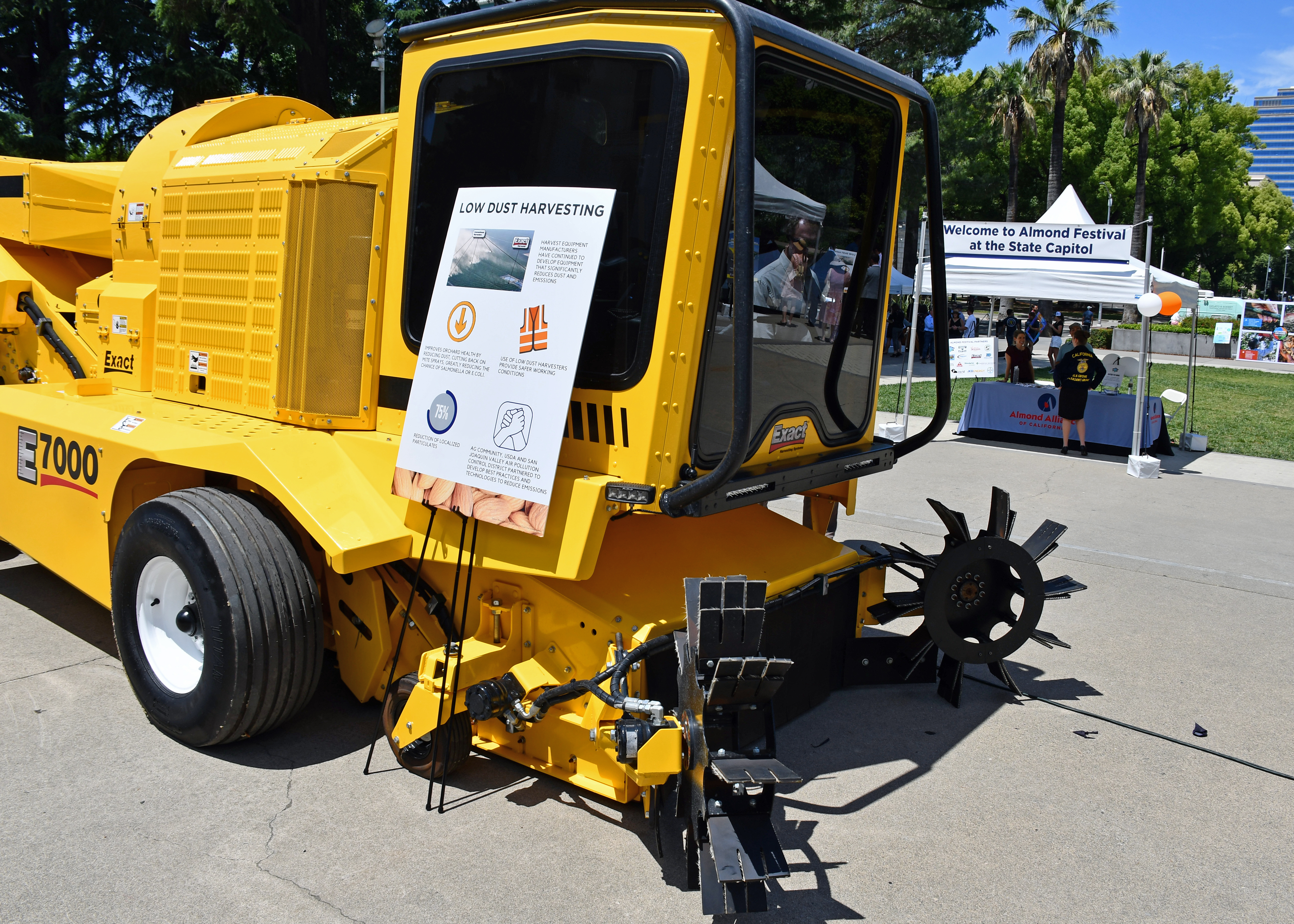 A low-dust almond harvester on display at the state capitol.

Among the dozens of regulatory measures proposed in the 175-page plan for Shafter, a section on agriculture details the emissions from engines, dust, dairy manure, pesticides and fertilizers. The CERP allocates an annual budget of nearly $20 million toward the ag programs.

In presenting the draft at a meeting in August, District Program Manager Todd DeYoung told the steering committee: “We've heard a lot of concerns about dairies.”

Under the plan, the district and state would provide $3.9 million to cover up to 75% of the cost for five dairies to upgrade feed mixing equipment from diesel to electric motors. It would also put $2.5 million towards incentivizing dairies to retire old diesel trucks and purchase near-zero- or zero-emission vehicles.

The plan also volunteers the California Department of Food and Agriculture and the USDA Natural Resources Conservation Service to help dairies install digesters for the manure, as well as adopt alternative manure management plans, such as aeration or the emptying of manure lagoons during the sensitive months of December and January. Notably, Governor Gavin Newsom significantly cut GGRF funding for the state’s two methane reduction programs in the budget he signed last month.

“I want to see monitoring of these dairies before we commit millions of dollars to them,” said Tom Frantz, an almond grower who sits on the committee alongside five other environmental justice advocates and 19 local residents. 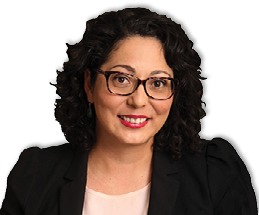 For almond growers, the plan would put $2.5 million toward incentives for purchasing low-dust harvesters. Reducing agricultural dust further, farm advisors would ramp up efforts to help local farmers implement no-till, low-till and precision ag practices. In January, the state also invested $1 million into a related pilot project to incentivize on-farm alternatives to the burning of wood and crop residue, for practices like chipping the material and introducing it back into the soil or transporting to a cogeneration plant.

CERP would also help farmers electrify irrigation pumps through $200,000 in grants. This would cover as much as 90% of the cost.

“This is well above what we’ve done in other areas,” said DeYoung. “That’s about 40% more than what we would normally pay.”

Since the draft was released, committee members have proposed eliminating the dairy truck and dairy digester programs from the CERP, while doubling the funding to the ag burning program to $1 million.

Jessica Coria, a district air quality specialist, added that pesticides have also been a top concern for the community.

As part of AB 617, the Department of Pesticide Regulation (DPR) has also been working with the district to install a community air monitoring network. Volunteers operate the individual air monitors, rather than DPR staff.

“I wouldn’t say that it rises to the level of data that DPR or ARB can collect,” said Emily Marquez of the Pesticide Action Network, explaining at a DPR meeting in March how her environmental advocacy group supplants agency staff in helping communities manage the air monitors.

During that same meeting, a DPR committee reviewed recent spikes in readings from existing air monitors in Shafter. The spikes were from the pesticide 1,3-D. DPR later reported it would further mitigate use of the pesticide as a result, while industry has disputed the department’s interpretation of the readings, according to sources. The Shafter steering committee feared for the health impacts of 1,3-D use, requesting the state further restrict applications, while adding a notification system for residents during applications and expanding the buffer zones. The air district mentions the concerns in the CERP document, but defaults to the authority of the state.

According to the plan, "DPR and CARB are committed to including in the CERP actions to address pesticides” and will draft a strategy by the end of August 2019.

The Shafter steering committee has also requested more meetings to discuss air monitoring, as the district finalizes plans to add more monitors to the network.

Others in the committee raised concerns about pollution floating in from beyond the small radius around Shafter. Wildfire smoke will continue to plague the region, while the surrounding mountains collect air pollution in the valley like a bowl. The air district deferred to the broad activities of the state legislature and administration in funding wildfire prevention and suppression across California.

Wrapping up the steering committee meetings, the air district plans to publish the two CERPs by September 12, presenting them to the district governing board the following week. ARB will review the plans in October and vote to adopt the final drafts in February.