A five-year, USDA-funded study says organic producers can’t get the crop insurance coverage they need either because it’s unavailable for their particular crops or won’t cover their losses adequately because of the conservation practices they follow.

The 132-page report recommends USDA promote the insurance program more widely while also making a number of changes to rules for both single-crop policies and for the Whole Farm Revenue Protection program, which the study found to be the best option for many organic producers.

New educational efforts also are needed to promote the program to specific commodities and markets, including mid- to large-scale producers, the report says.

The study, conducted by the National Center for Appropriate Technology in Butte, Mont., also suggests organic farmers are no more risky than conventional growers despite higher loss ratios on conventional policies.

“Contrary to a common stereotype, organic growers are just as interested in crop insurance as any others,” the study says. “Their main problem is not a lack of interest or education, but rather the cost, usefulness and reliability of the products and services available to them.”

The study was funded through USDA’s National Institute for Food and Agriculture. The Risk Management Agency would be responsible for making any administrative changes to crop insurance.

The report says that organic grain and legume farmers use crop insurance widely but that participation drops off significantly for fruits, vegetables and other specialty crops because of limited availability.

According to a survey conducted as part of the study, 54% of organic grain and legume farmers say they buy crop insurance every year, and 78% had bought coverage at least occasionally in the past. By comparison, fewer than 30% of the specialty crop growers surveyed said they had ever bought insurance.

Doug Crabtree, an organic farmer in Montana, said single-crop policies are often not worth the cost because of the practices, including cover crops, crop rotations and intercropping, that he uses under USDA conservation program contracts. “The yield will be rated so low or the cost so high that it’s not practical,” he said in an interview. 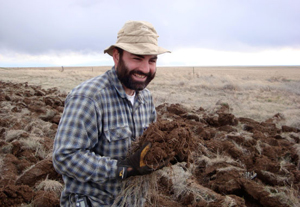 He now covers everything but wheat under a WFRP policy but it doesn’t provide as much protection as a conventional policy.

“You can’t have one hand either mandating that you do various things, or at least paying you through conservation contracts to do those things, and then have another hand of the government saying you can’t do those things or you're going to lose insurance or pay a higher rate to have it,” Crabtree said.

The study recommends that RMA focus on expanding use of the WFRP to help specialty crop producers in particular.

The study cites cabbage as an example of a crop that’s hard to insure. Although it can be grown everywhere, insurance is available in just 13 states, including only one county each in North Carolina and Texas.

The study urges RMA to reduce the paperwork requirements for WFRP — many agents complained to researchers about the paperwork — and to lower the burden of proof on growers when estimating insurable revenue.

RMA also should count indemnities as historic farm revenue for claims adjustment purposes, allow lower-than-average years to be replaced or adjusted when determining a farm’s average historic revenue, and eliminate a 35% limit on expansion on revenue above a farm’s five-year average, the study said.

WFRP is a better indicator of the revenue risk of organic farms in part because it captures the effects of crop diversification, a major risk-reduction strategy used by organic farms, the report says.

In a statement, the Organic Trade Association said it would support several recommendations in the report, including proposals to deem NRCS conservation program practices as good farming practices for insurance purposes. OTA also supports expanding single-crop policies to more counties and eliminating a cap on contracted prices.

Ferd Hoefner, senior strategic adviser for the National Sustainable Agriculture Coalition, said his group continues to push RMA to recognize NRCS conservation practices as good farming practices. That should be easier for RMA to do now that it and NRCS are under the same Farm Production and Conservation mission area at USDA, he said.

“If FPAC has meaning, then it should not be tolerable to continue to have two of its agencies sending conflicting messages, with farmers left holding the bag,” Hoefner added.

NSAC also is urging RMA to reduce the paperwork burden with WFRP policies and to reinstate some funding for education programs.

Tara Smith, vice president of federal affairs for the Crop Insurance and Reinsurance Bureau, said the industry “appreciates the research to improve and expand the crop insurance program, and we share the goal of ensuring that actuarially sound policies are available for all types of farmers across the United States. As we look for opportunities to improve the program, we welcome collaborative efforts to help prevent cuts to the program, to maintain the integrity of the program and to preserve crop insurance participation amongst all types of farmers.”

The Risk Management Agency didn’t respond immediately to a request for comment.