Federal officials have announced another E. coli outbreak in romaine lettuce, but the agency says it is already over. The traceback investigation pointed to romaine produced by farms on California’s Central Coast. But the source of the contamination was never found, according to FDA and the Centers for Disease Control and Prevention.

The FDA said in a statement that the public was not alerted earlier because the outbreak was over and the lettuce was past its shelf life, so there was nothing for consumers to do. No illnesses were reported after Sept. 8, well before the CDC started investigating the case on Sept. 17.

Keep in mind: The agency said information about such outbreaks that consumers can’t act upon ordinarily wouldn’t become public until a follow-up study is published months later. In this case, the agency said it decided to announce the outbreak “in order to ensure full awareness by the public.”

The California Leafy Greens Marketing Agreement responded with a statement saying it would use any information gathered in this investigation to improve its mandatory food safety practices. LGMA Chairman Dan Sutton called the traceback information that growers provided instrumental to the FDA’s immediate response to the outbreak.

Another take: Michael Hansen, a senior staff scientist at Consumer Reports, acknowledged that FDA doesn’t announce every outbreak. But he said there have been so many major outbreaks linked to romaine that in this case the agency “should have made an announcement sooner and let consumers decide for themselves” whether they wanted to continue eating it.

Dan Flynn, editor of Food Safety News, took a harsher line. He declared that every mention of the FDA or CDC in the publication’s articles over the next six weeks will now come with an advisory warning the agencies are “not to be trusted.”

The California Water Commission has released draft regulations detailing how the state would spend federal funding for water infrastructure projects.

Congress passed the $12-billion Water Infrastructure Improvements for the Nation (WIIN) Act in 2016. The commission’s regulations would provide implementation guidance based on the infrastructure needs outlined in the 2014 Proposition 1 water bond. That ballot measure delivered $7 billion to water projects, though it was well short for completing the Sites Reservoir Project or adequately tackling clean drinking water needs, for example.

The commission is taking comments through Dec. 18, with a public hearing scheduled for that day.

China praises agreement with US on core principles

China is offering new hope that the “phase one” trade deal that’s supposed to be a boon for U.S. ag exports can be finalized and signed this month. High-level U.S. and Chinese trade officials continued trade talks Friday and were able to reach a “consensus on principles,” according to a statement released Friday by China’s Commerce Department.

Meanwhile, President Trump on Friday threw out a possible new location where he and Chinese President Xi Jinping could sign the pact: Iowa.

Trump and Xi were hoping to sign the phase one deal at an Asia Pacific Economic Cooperation summit in Santiago, Chile, Nov. 16-17, but the event was canceled because of massive street protests.

“I don’t think we’re looking at a long delay,” USDA trade undersecretary Ted McKinney said about the loss of the Santiago venue. “I don’t get a sense that either president wants to delay this … Both want to get it done.”

Phase one may be only partial ag deal

While China will be agreeing to new ag purchasing and changes to ag policy in the phase one deal, some of the thorniest issues may take additional negotiations, McKinney tells Agri-Pulse.

“I’m certain both sides want to put as much ag into phase one as they can, but inevitably there are just some things that are too heavy a lift, so it would not surprise me that there would be some ag coming into another round or two,” McKinney said. “I don’t know how long this will go or how many rounds there will be. We’re focusing on round one now.”

National Economic Council Director Larry Kudlow, speaking to reporters Friday at the White House, said “the agriculture chapter is just about closed down” for phase one, but noted that there was still plenty of work left to do on an enforcement mechanism. 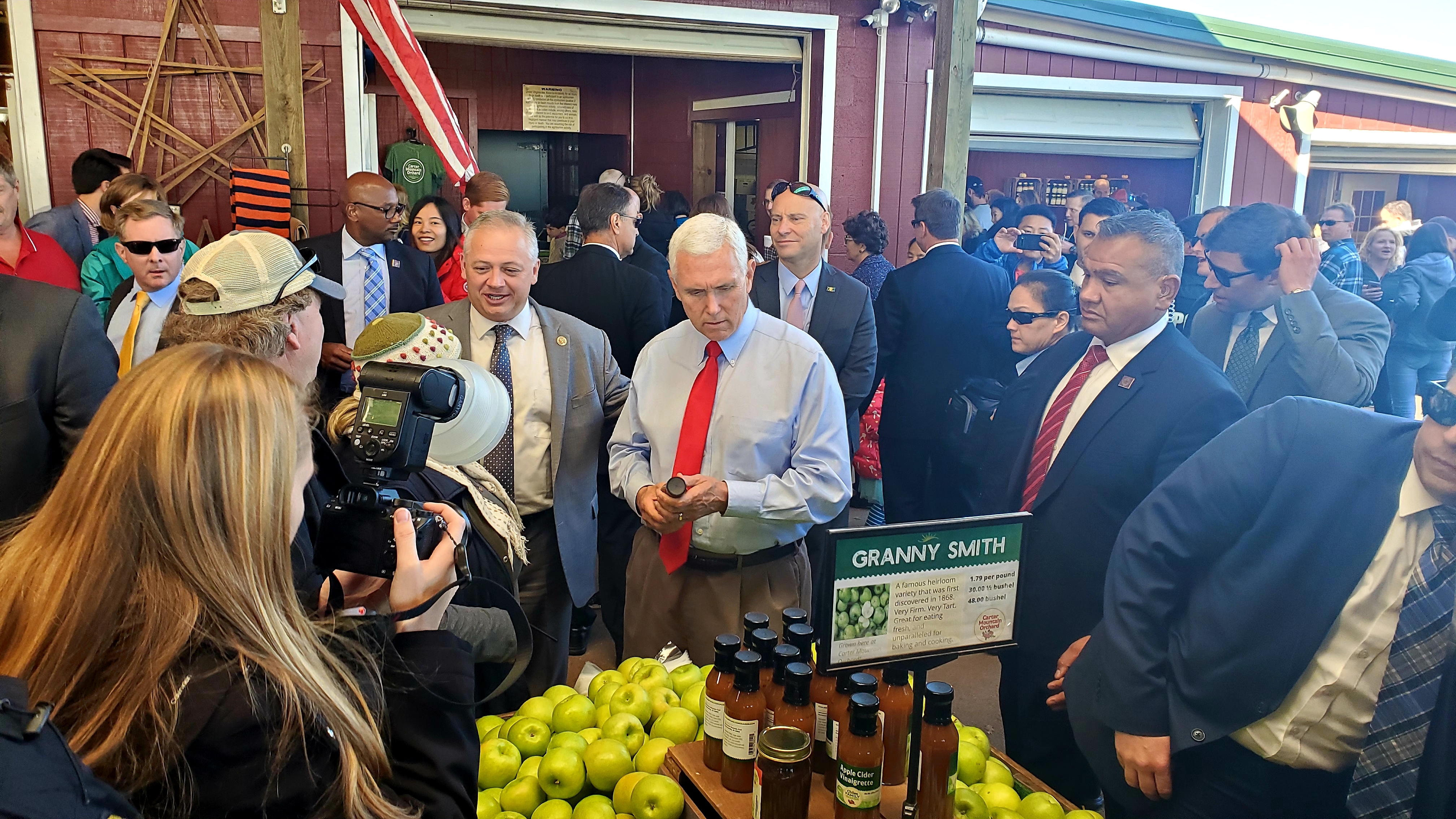 Vice President Mike Pence, with his chief of staff, Marc Short (behind him, center), at a Virginia orchard over the weekend. Pence was promoting the U.S.-Mexico-Canada Agreement. (Pool photo)

Pelosi: USMCA vote could be pushed to 2020

House Democrats continue to negotiate an agreement with the White House on the U.S.-Mexico-Canada Agreement in an effort to wrap up the talks, but House Speaker Nancy Pelosi admitted the process may get pushed into 2020.

“We’re on a path to yes, and I think every day brings us closer to agreement,” Pelosi said in an interview with Bloomberg. “I’d like to have it done as soon as it’s ready. I wouldn’t rule it out next year. Hopefully we can do it sooner, but I said when it’s ready we’ll do it.”

Staunch USMCA supporters like Senate Finance Chairman Chuck Grassley, R-Iowa, have warned that if the House doesn’t approve the trade pact this year, it may get pushed aside completely next year as election activities kick into high gear.

By the way: The House is in recess this week, but a group of House Democrats will be in Ottawa this week for a day of meetings to discuss the trade deal, Rep. Ron Kind, D-Wis., tells Agri-Pulse.

Don’t miss: Our look at this week’s agenda in the nation’s capital, Washington Week Ahead, and this week’s Agri-Pulse Open Mic interview with Sen. Jon Tester, D-Mont. He talks about the pending USMCA trade agreement, trade relations with China and other issues.

“Every year, as the fire’s rage & California burns, it is the same thing-and then he comes to the Federal Government for $$$ help. No more. Get your act together Governor.” – President Trump, in an early-morning tweet yesterday, which interrupted last week’s conciliatory mood between the two administrations over emergency wildfire support.