As a moderate Democrat, Assemblymember Adam Gray of Merced has been an outspoken advocate for water for agriculture and is deeply familiar with the amount of regulations layered onto the industry over the decades.

Gray grew up on a dairy in Merced and hails from a long line of Democratic farmers. He worked at the family feed store in high school and his father later ran a dairy equipment company.

Gray’s experience at the Legislature began as a college intern and then as a staffer for then-Assemblymember Dennis Cardoza, who chaired the ag committee. For a dozen years, Gray worked across both houses in “every position, from answering phones to serving as somebody's chief of staff."

Gray spoke with Agri-Pulse on how that upbringing inspired his political career, on his frustrations with the administration of former governor Jerry Brown and on the industry’s challenges when it comes to messaging.

1. How has growing up in the dairy business influenced your work today?

I thought that bringing all the experience I had about public policy and agriculture and putting that to work for this community made a lot of sense. I could balance both having some background in agriculture with expertise in how state government works, and hopefully be more effective.

It's important to understand that when you represent a rural community, we're often treated like the redheaded stepchildren of both state and federal politics. Some of that is just the math. We don't have as many elected representatives in a smaller population. We have less members of the legislature from rural communities. Therefore, we have less members of the Legislature who have a deep understanding and appreciation of agriculture. Those are things that I set out to change when I got elected in 2012.

2. How have you seen the perception of agriculture change during your time at the capitol?

Fewer and fewer people are connected in a personal way to agriculture. There was a time in the country when most people had a family member who farmed or lived in a rural community. That's less and less true as our urban populations grow and cities become denser. There's less direct contact with agriculture. The perception is one of just indifference, not knowing much about it.

A lot of my colleagues and many of their constituents think that milk grows on the shelf at Whole Foods.

3. How do you navigate challenging topics like water among your many constituents?

Water is not an area people understand. The simplistic view of it is that water is a natural resource that belongs to everybody. The reality of water is that for a hundred years, we've built a legal system where water is treated as not that different from property rights.

What if you owned a home in downtown Los Angeles and one day somebody came along and said, “You no longer have the ability to access water for your home?” Well, the value of your home would immediately decrease in a significant fashion. The bank that you borrowed money from to pay for that home still expects to be paid back. They’re not going to give you a discount because you no longer have water.

That's the exact circumstance that urban legislators and interests ask rural farmers to deal with. We're going to take away your water and the reliability of that water, which is going to decrease the value of your business and your home and your farm, and with no compensation or recognition that in order to make a living farming you need that water.

Without water, our farms are also inhabitable, and there's real risks there for the next generation of farmers. 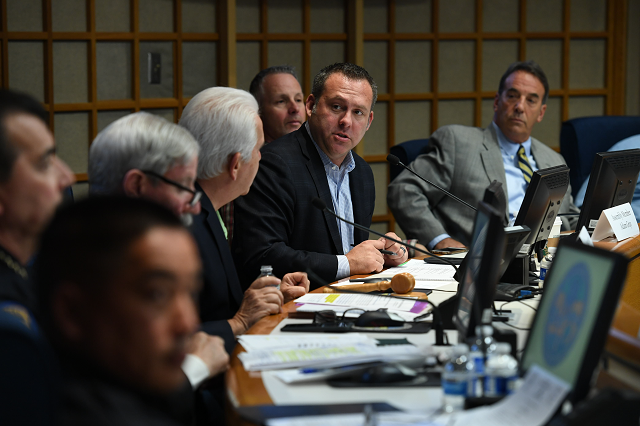 I try to make people aware of the amount of production here in California – 13% of the nation's food supply. That's not an insignificant number.

All of these layers of regulatory costs have driven small family farmers out of business and created a whole bunch of consolidation. You've seen it in dairy and across the board. I find it amusing that (policymakers) want localized agriculture, with smaller production, but they want to pass a bunch of regulations, laws and restrictions that put those very people out of business and force people to have large-scale operations.

On a visit we had from Kamala Harris when she was running for U.S. Senate, we sat across the table with a bunch of people who came from a variety of agricultural production areas. Every single person around this table introduced themselves as a small family farmer.

When they got done talking, I looked at Attorney General Harris and said, “With all due respect, ma'am, the reality is some of these people are pretty big family farmers. But the reason they have to couch themselves in those terms is because if they admit to being big family farmers, then they are dismissed as corporate agriculture. Do you do the same thing when you go to Silicon Valley? Does Google introduce themselves as a small family tech company?” She got it.

Why do we have to apologize for being successful? We have the best, most productive agricultural region in the world. We have the highest quality, safest food. We should be proud of that and celebrate it, not vilify it.

4. Do you feel you've had to defend agriculture more?

Constantly. I'm a highly nonpartisan individual. I'm a registered Democrat. If you take my grandfather from North Dakota, many of the farmers he knew were all Democrats. They go back to FDR. The Democratic Party stood up for the small family farmer. Fast forward to 2019, I'd venture to guess that two-thirds of our farming community or more are Republican now.

In California, the Democratic Party isn't really the Democratic Party anymore. They're more the Green Party. They've moved so far to the left, particularly on environmental issues, that they put themselves crossways with agricultural communities. They're constantly asking for more sacrifice and providing no support: Use less water, but we're not going to store more water. We're going to raise the cost of labor, but we're not going to do anything to support this industry.

As people have rightfully gotten frustrated, the state has become more and more a one-party state. Not only do we have to overcome the urban-rural divide and the natural bias that urban legislators have, we also have to overcome the partisan divide. Agriculture becomes viewed as a Republican industry. That's not helpful when three-fourths of the State Assembly is Democratic.

It's a constant fight, both in a partisan sense and in a cultural sense to keep enough legislators thinking about the impacts some of these public policies have on agricultural and rural communities. If you look at our region, we have 14 or 15 members who live here in the San Joaquin Valley. Of those about half are Democratic and half Republican.

When you go to L.A., every single member of the delegation is Democratic. They’re united both in a cultural sense that they're all from an urban community and also in a partisan sense. They stand together on issues.

5. What are your thoughts on the governor’s term so far?

There are hugely positive signs and I am cautiously optimistic. This governor has given us every reason to believe he intends to strike a fair balance. We do have to consider he's the governor for the whole state. But he has given more attention to this region than any governor in recent memory.

Governor Newsom has been to my district specifically more times in one year than Jerry Brown came in my six years. Governor Newsom’s been down here looking at our drinking water situation and water reliability for agriculture.

When former chair of the State Water Board Felicia Marcus refused to have any compromise or any inclusion of our local irrigation districts and communities in the discussion around the Bay-Delta update, he fired her. He moved in a different direction and appointed a new chair.

We can fight all this stuff out in court, and you can find the lawyers on both sides. We could litigate for 10 years and both sides seem to think that they could win. But the environment doesn't gain a single drop of water during that time and agriculture doesn't gain a single bit of water security for the future. There's a lot of people that believe there's a path forward.

6. What do you expect next year to look like?

The large effort I remain committed to – and I'm sure we'll have some legislation next year on – is how to increase our water supply in the state.

I had a bill this year that unfortunately got vetoed, but would have required the Department of Water Resources to study climate change as it relates to our reservoirs and make some recommendations about changes to the way we operate our reservoirs and what additions we need to make sure that we have a reliable water supply.

Climate change is going to take a major toll on farming, just as it is on other aspects of the environment, and we need to be prepared. In the last 40 years, almost half a century, we've increased our state water supply by 1% and we've almost doubled our population. That's not going to provide security and reliability for the future.

One of my frustrations with the previous administration was they never actually had a plan. If you look at the California Water Action Plan, there's not really any plan there. There was always a plan to work on the twin tunnels.

A real plan is going to involve an all-of-the-above approach. We need to be able to move water around and share water. We need new storage. We need conservation. We need recycling. If we do that all together, I am so confident that we could have an adequate water supply for the future and every community could come out on top. It just requires cooperation and collaboration.

There's a group of folks in Sacramento working on a water and resources bond. The governor has been involved in it and some of the Senators have been involved in it. When we get back in January, that's going to be probably No. 1 on the front burner.