Battle over Colorado River heats up on two fronts

The Imperial Irrigation District (IID) has set some ground rules in its future negotiations over Colorado River allocations. On Monday, it passed a resolution recognizing the water conservation efforts of farmers while also prioritizing the Salton Sea, a growing public health and environmental crisis. IID is also engaged in a legal battle with a local farmer that could cripple its negotiating power if it loses.

IID has senior rights to 40 percent of the water available to the Lower Colorado River Basin, the greatest amount of any agency. This has enabled IID to become the largest irrigation district in the nation. All but 3% of its water deliveries go to agricultural users. Imperial County produces more than $2 billion annually in farmgate sales, ranking it No. 10 in the state.

Now any new transfers taking water away from the Imperial Valley must be both in the best interest of the valley and approved by the IID board. The resolution asserts as well that only the board can negotiate water agreements for the district. With the Salton Sea, it also warns if the state “were to fail in its commitment,” IID will consider it a breach of the Quantification Settlement Agreement of 2003 (QSA) and will take actions “to preserve its own rights and the public health.” The QSA required California to reduce its use of the river as other states began to take larger shares of their allocations.

IID’s resolution is an attempt to clarify its stance after decades of soured negotiations with the six other basin states, as well as with California, its cities and the district’s own farmers and utilities.

The most prominent instance was the voluntary Drought Contingency Plan (DCP), an emergency measure in which water rights holders along the river voluntarily cut back allocations to restore two key reservoirs before levels dropped below the pump intakes and halted all water deliveries. 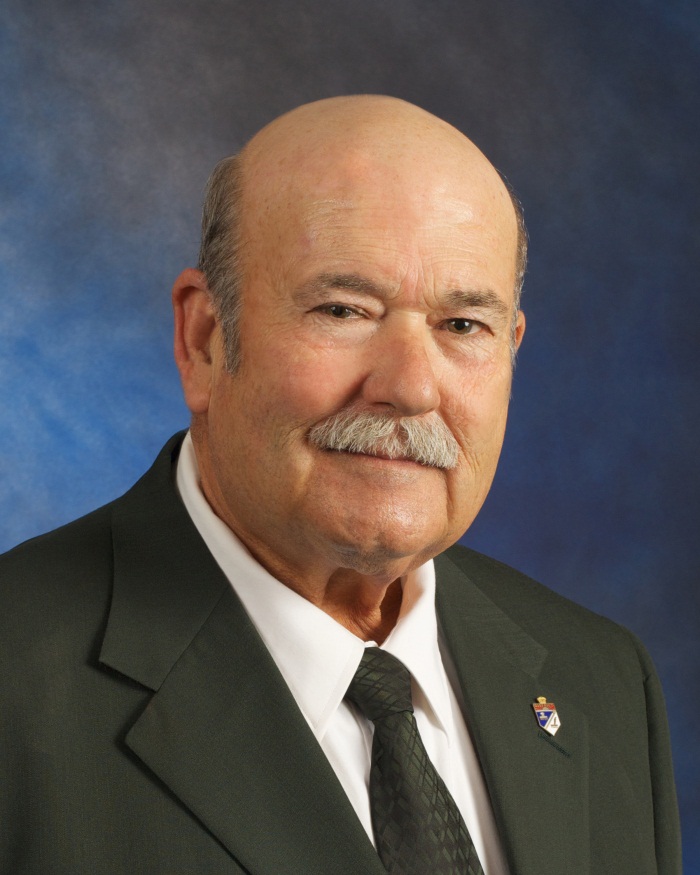 The coalition approved the DCP in April over the objections of IID, with Congress quickly authorizing the plan. IID had refused to vote until the state followed through on funding cleanup efforts for the Salton Sea. (The state has since secured five years of funding for a 10-year project to limit the damage caused by the deterioration of the lake.) Many viewed IID’s reluctance as holding the negotiations hostage over “an insignificant amount of money.” In response, the Metropolitan Water District of Southern California, which supplies Los Angeles and San Diego, volunteered to cover IID’s share of the water cutbacks in order to pass the DCP.

The IID resolution pushes back on Metropolitan’s move to override its vote, while further stressing the critical link between the Colorado River and the health of the Salton Sea.

“When the DCP was being considered, (the Salton Sea) fell out of the mainstream and became an issue of controversy,” said IID General Manager Henry Martinez during Monday’s board meeting.

He explained this resolution will communicate to partners on the river “what issues we can be flexible on and other ones where we cannot be.”

According to IID, negotiations have already begun over long-term drought measures after the DCP expires in 2026. The board is resolute that these measures will not include further cutbacks for farmers, beyond the existing QSA.

“This document says there's not going to be a QSA 2,” said Chuck DuMars, a water attorney advising the board. “That's not a solution.”

The QSA still carries strong feelings of betrayal in the valley. Board member Bruce Kuhn made it clear he had originally voted against the QSA because it did not include a plan for restoring the Salton Sea. Then the State Legislature passed the Salton Sea Restoration Act of 2003, and Kuhn  carried the swing vote to ultimately approve the QSA. According to Kuhn, the state then decided not to appropriate funds for the restoration.

The QSA has led IID and its farmers to conserve a total of about 5 million acre-feet of water. By 2026, the district plans to save nearly 500,000 acre-feet per year, or about 15 percent of its entitlement from the Colorado River. Yet in 2018, the QSA no longer required IID to release flows to the sea, which resulted in much of the lake drying up. 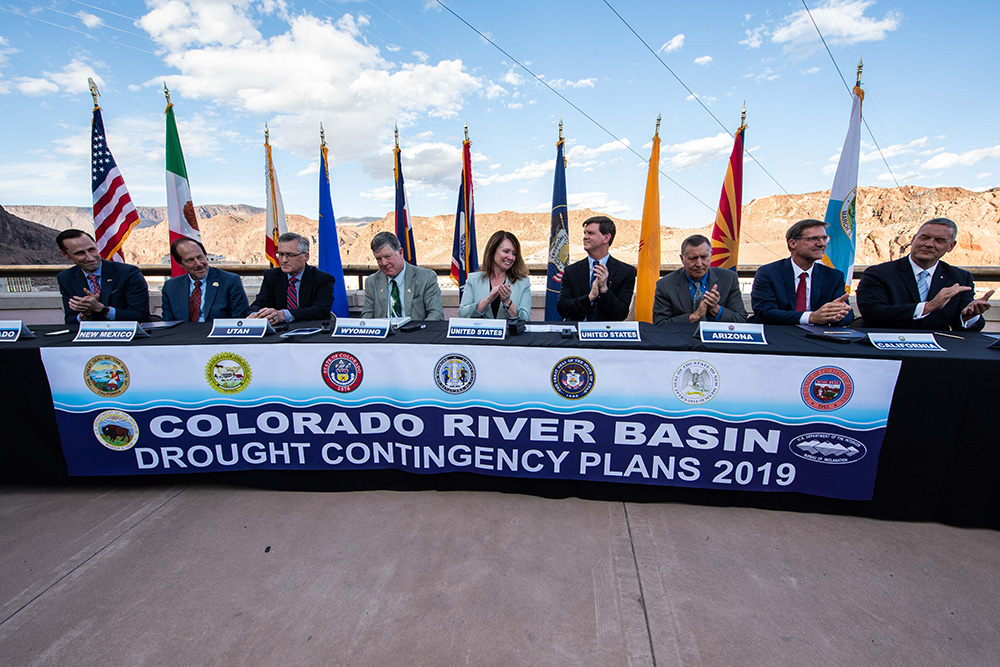 Representatives from each of the Colorado River Basin States and federal agencies sign the DCP at Hoover Dam.

“We are finding our growers can conserve more water than what the growers, and certainly ourselves, anticipated,” said board member James Hanks on Monday.

Both Kuhn and DuMars said they hoped to see a return on IID’s “enormous” capital investments for on-farm conservation. Kuhn asked to amend the resolution to state that any extra water – after meeting the reasonable and beneficial needs of the district – should be monetized before sending it outside of the district.

“Why would we let Metropolitan have water for nothing?” he said, though he agreed to table the issue for a later resolution.

IID is also facing pressure to keep that water within the district. JB Hamby, who is running for a board seat, raised questions over “who owns the water once it’s sold out of the valley.” He pushed to amend the resolution to give the general public a two-thirds vote on any water negotiations. Hamby argued every drop of water should remain in the district.

Kuhn was quick to correct Hamby that any “extra” water would be from high-flow periods, when all needs are met and no other storage opportunities are available.

In a similar sentiment to Hamby, Michael Abatti, whose farming family is recognized throughout the valley, has long battled IID over water rights. During the drought in 2013, he sued the district over the QSA, claiming farmers are the senior water rights holders and the district cannot legally authorize cutbacks in water allocations on their behalf. Abatti won that case in 2017, but it is currently in a state appeals court.

In a joint amicus brief filed for that case, a county farm bureau, the county vegetable growers association and a local farm water group sided with Abatti. They argued “IID has no power to take away a vested water right created under the laws of this state” more than a century ago. The brief claims IID had “betrayed the trust” by prioritizing public use over farmers, without defining what “public” actually means.

“Were it not for the appropriation of the water and the beneficial use of the water on the land, this would still be a desert,” the brief reads. “Landowners took this risk, spent their money, labored and produced something that has benefitted all residents in the Valley.”

The State Water Resources Control Board and three other water agencies and organizations filed counter briefs on behalf of IID. The Water Board argued the trial court failed to follow longstanding laws that water users have “only a right to continued water service” and not ownership of a certain quantity of water. Similarly, the Association for California Water Agencies argued districts are granted flexibility in managing water in order to adhere to state environmental laws and conservation programs.

Kuhn, who has ties to the Abatti family, recused himself from board decisions on this lawsuit as well as a number of other occasions. In a separate issue Monday, IID General Counsel Frank Oswalt cited a conflict of interest with Kuhn when he recently cast a vote on expanding a water contract for a geothermal facility. Kuhn was the lone no vote against granting additional water allocations to the utility. Michael Abatti’s lawyers had intervened, claiming the contract violated the trial court’s 2017 decision. They argued IID was not authorized to commit water to non-domestic or non-agricultural users during times of shortage.

Kuhn was furious. He said the board’s vote “didn't have anything to do with Abatti.” Oswalt asked Kuhn to leave the room and the board rescinded the vote before voting again to approve the contract. The embarrassment added to a long list of frustrations for Kuhn.

Kuhn had also announced at the meeting he would not be seeking reelection, saying, “It’s just not fun anymore.” He pointed to increasing pressure “from the younger generation” over his vote on the QSA.

“Had we not done that, we'd be in a far worse position,” he said. “It's brought hundreds of millions of dollars into the valley and we've been able to farm more acres with less water.”