The Centers for Disease Control and Prevention have now linked 67 illnesses to romaine lettuce grown in California’s Salinas Valley and contaminated with deadly E. coli bacteria. That’s an increase of 27 from last Friday, when FDA issued an alert warning consumers not to eat any romaine that was grown in that region.

Six people have developed hemolytic uremic syndrome, a type of kidney failure, but no deaths have been reported.

FDA says it has asked the industry to voluntarily withdraw from the market any romaine grown in the Salinas Valley. The agency hasn’t yet identified the farm that is the source of the contamination. 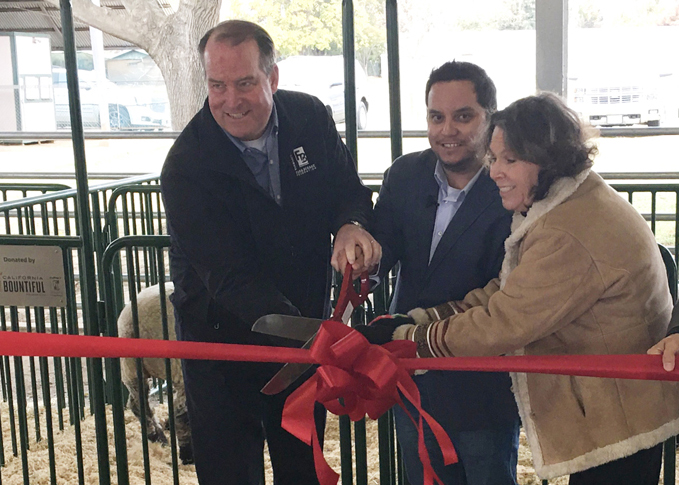 The California Farm Bureau yesterday announced the donation of portable livestock pens to seven fairgrounds across the state. President Jamie Johansson said, “Already this fall, we’ve seen the pens used to help livestock during the Kincade Fire in Sonoma County.”

Golden Gate Soy has agreed to discontinue selling products until it complies with FDA regulations. A federal court issued a permanent injunction Friday against the company for resuming operations. The action follows several FDA inspections that found a virulent strain of listeria in the company’s food preparation area.

FDA’s Melinda Plaisier said the unsafe practices “not only violated the law, but also put consumers in harm’s way.”

The FDA had no reports of confirmed illnesses from the products.

Plates, glasses and eventually bellies across the country will soon fill with California agricultural products. Each year, the industry delivers 13% of the nation’s total sales, across 400-plus commodities.

As you say your thanks for all this bounty at the dinner table, here’s a snapshot of some of those California ingredients sitting before you.

The Golden State leads the nation in pumpkins for pie; milk and cream for the whipping; wine for the in-laws; celery, onions and walnuts for the stuffing; nearly all the items in your salad; garlic roasted carrots for the side dish; and almonds for the green bean casserole.

California is also second for sweet potatoes and No. 8 for turkeys, with 320 million pounds not pardoned annually.

The White House continues to be upbeat about prospects of an interim trade deal with China, although there have been few public signs of negotiations in recent days.

“We feel that deal is going to happen, and we continue to work arduously toward that,” she said.

Another take: Senate Finance Committee Chairman Chuck Grassley, R-Iowa, told reporters Tuesday that everything he has heard in private conversations and seen in the media indicates the negotiations on a “phase one” deal “are going along OK.”

But he noted that Treasury Steven Mnuchin and U.S. Trade Representative Robert Lighthizer had not yet accepted an invitation to go to Beijing. “They aren’t going unless there is a real chance of having a final agreement. It’s up to China to show that good faith,” he said.

Despite the uncertainty with China, USDA has raised its forecast for U.S. farm exports in fiscal 2020 to $139 billion, up $2 billion from the August estimate, and $3.5 billion above the FY19 exports.

USDA economists say expectations of a deal with China on ag trade have helped boost the value of soybean and cotton exports. USDA’s estimate for FY20 pork exports was raised $400 million to $6.7 billion, largely due to demand from China.

The estimate for dairy exports was raised $300 million to $5.8 billion. 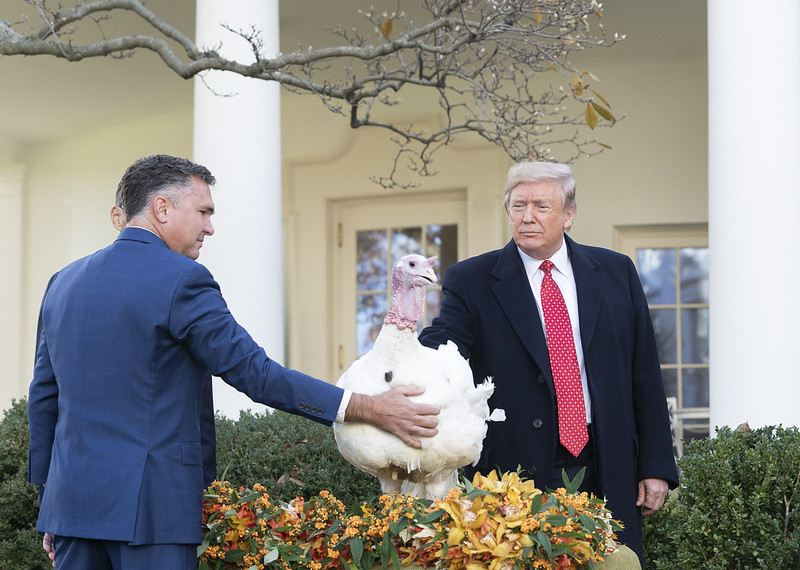 Wellie Jackson, a Butterball contract farmer from North Carolina, and President Trump with Butter the turkey for the annual presidential pardoning.

Elizabeth Warren, who’s been struggling to gain traction with minority voters, has proposed a  plan to make it easier for black and Hispanic farmers to pursue claims with USDA.

The Massachusetts senator’s plan includes having an independent civil rights oversight board to supervise the handling of complaints by USDA’s Office of Civil Rights. She also would appoint a civil rights ombudsman to help minority farmers navigate the complaints process.

And to make it easier for minority farmers to go to federal court, Warren would turn off the time limit for filing federal lawsuits while complaints are being processed at USDA. As it stands, Warren says, the complaints take so long to be processed that farmers are unable to file a lawsuit after the department rules against them.

The Senate Health, Education Labor Pensions Committee has scheduled a vote next Tuesday on Stephen Hahn’s nomination to head the FDA.

There’s been no sign of controversy around the Texas cancer expert, and Senate Republicans are moving unusually quickly to get him installed at FDA.

EPA wants to require the release of the underlying data, including medical data, that is used in studies to support regulations. In a statement, the journal editors say “the most relevant science, vetted through peer review, should inform public policy. Anything less will harm decision-making that claims to protect our health.”

They also said that when old rules not subject to the new “transparency” requirements need to be updated, “foundational science from years past” could be discarded. “That would be a catastrophe,” the editors say.

The journals the editors represent Science, Nature, The Lancet, the Public Library of Science (PLOS) journals, the Proceedings of the National Academy of Sciences, and Cell Press.

“Let me get back what they took away from me.” – Nicolás Martínez, a farmworker under the post-war Bracero program. A CalMatters article details how Mexico still retains 10% of the workers’ incomes decades later.